As the economy continues to struggle under the weight of the COVID-19 pandemic, investors have seen stock prices plummet. While some healthcare stocks directly involved in combating the virus experienced nice gains, many otherwise healthy companies saw their share prices erode over the past month.

That's been the case with Edwards Lifesciences (NYSE:EW), a leading player in the cardiovascular and artificial heart valve markets. With shares now trading at a steep discount compared to where they were at the beginning of 2020, does this make Edwards Lifesciences a potential buy for investors looking for a good deal? 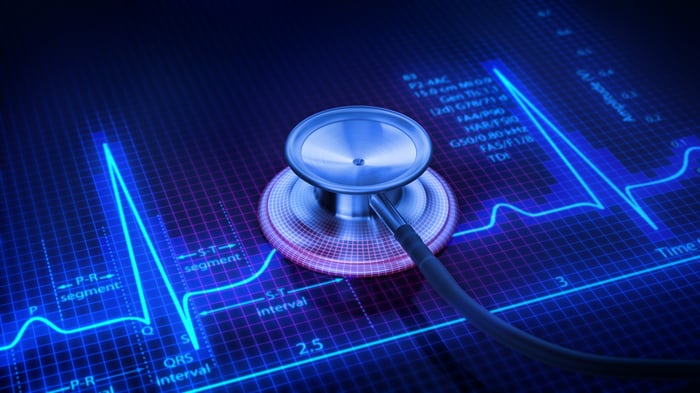 Cardiovascular disease is understandably a major issue. The World Health Organization (WHO) said around 17.9 million people die each year due to cardiovascular complications, making it the leading cause of death around the world. Most cardiovascular deaths are due to heart attacks and strokes, two conditions that are directly correlated with sedentary, unhealthy lifestyles and being substantially overweight, according to the WHO.

The American Heart Association said cardiovascular disease already affects as many as half of all adults in the U.S. Companies developing effective solutions in this area face no shortage of demand for their products and services.

A snapshot of the business

Edwards Lifesciences' business can be broken down into a couple of main areas. The first is its artificial heart valve business, which includes the company's primary source of revenue, it's Transcatheter Aortic Valve Replacement (TAVR) products.

In a TAVR treatment, a doctor inserts a catheter into a patient's body and guides an artificial aortic valve into the heart. Once in place, this new valve helps restore functionality to the malfunctioning aortic valve, restoring proper blood flow.

Doctors have traditionally performed open-heart surgery in patients with malfunctioning aortic valves. However, the problem with open-heart surgeries is that many patients are considered to be at high risk for complications such as infection or irregular heartbeat due to how invasive the procedure is. As such, TAVR is considered a less invasive and safer treatment for some patients, such as the elderly.

Edwards Lifesciences also has a critical care business, which offers monitoring products for hospitals and healthcare groups. These products include catheters, pressure-monitoring devices, software systems, electronic monitors, and similar medical-monitoring equipment. While this segment represents a smaller portion of Edwards' total business compared to its TAVR business, revenue growth from this area is still in the double-digit percentage realm.

Despite Edwards Lifesciences' whopping $42 billion market cap, the company has reported stellar growth figures over the past year. In its Q4 2019 results, quarterly sales increased by 20% to $1.2 billion. Leading the way was TAVR sales, which grew by 29% to $763 million. In comparison, critical care sales came in at $199 million, a 12% increase from last year.

The company's bottom line is growing significantly as well. Fourth-quarter net income came in at $280.2 million, a sizable increase from the mere $7 million reported during Q4 2018, while full-year net income for 2019 was reported at $1.05 billion, up from the $722 million seen in 2018. Cash and cash equivalents came in at a healthy $1.5 billion as well, giving the company plenty of financial breathing room if, for any reason, it should need it in the future.

Edwards Lifesciences is trading at a price-to-sales (P/S) ratio of 9.8. This is quite a bit higher than other medical device makers, such as Abbott Laboratories (NYSE: ABT), whose P/S ratio is around 4.2. However, Edwards is growing at a much faster rate than Abbott, which reported a 7.1% quarterly revenue growth rate in comparison to Edwards' 20%. As such, it's not surprising that the stock is trading at a pricier valuation considering its growth.

What about the coronavirus?

As such, I don't think COVID-19 will do lasting, long-term damage to Edwards Lifesciences business. However, a short-term dip in revenue is possible, especially during the first half of 2020 as the worst of the pandemic hopefully sorts itself out in America and Europe.

While the stock is still a little pricey, Edwards Lifesciences is a remarkably fast-growing company. With its flagship product being less invasive and safer than open-heart surgeries, there's good reason to think that TAVR could become the norm for replacing aortic heart valves in the years to come.

Despite everything going on in the market right now, I think Edwards Lifesciences is a good buy for an investor looking for a large, well-established healthcare company that's also reporting impressive growth.