Please ensure Javascript is enabled for purposes of website accessibility
Log In Help Join The Motley Fool
Free Article Join Over 1 Million Premium Members And Get More In-Depth Stock Guidance and Research
By Adam Levine-Weinberg - Mar 29, 2020 at 9:25AM

Airline stocks have plunged over the past month, which could make this a great time for Warren Buffett to deploy some of Berkshire Hathaway's excess cash.

In late 2016, investors were shocked to learn that Warren Buffett's Berkshire Hathaway (BRK.A -1.32%) (BRK.B -1.63%) had invested in the four largest U.S. airlines: American Airlines (AAL -0.44%), Delta Air Lines (DAL -0.36%), United Airlines (UAL -0.62%), and Southwest Airlines (LUV -0.92%). True, the U.S. airline industry had turned in several years of strong earnings at that point. However, Buffett had been burned before from investing in the airline industry and had been warning investors about the danger of investing in airlines for two decades.

Today, Berkshire Hathaway owns stakes of roughly 10% in all four of these airlines -- slightly more for Delta; slightly less for the others. As of a few months ago, its airline investments had done fairly well. Its top three airline holdings -- Delta, Southwest, and United -- ended 2019 with a combined market value of $8.6 billion, 37% ahead of Berkshire's cost basis. But since then, the COVID-19 pandemic has caused air travel to crater, crushing airline stocks. 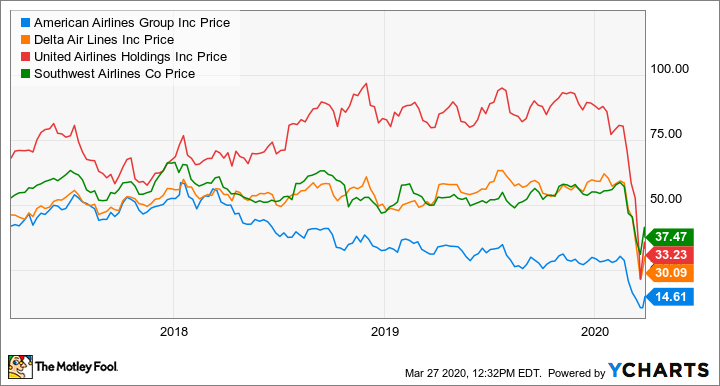 The depressed valuations across the airline sector could entice Buffett to consider buying an airline outright. After all, Berkshire Hathaway ended 2019 with $128 billion of cash and short-term investments that Buffett has been eager to put into higher-return investments. That said, the sharp turnaround in the airline sector's fortunes could also persuade Buffett to bail on his airline investments.

The case for buying an airline outright

In Berkshire Hathaway's recent annual report, Buffett underscored his belief that stocks will dramatically outperform bonds over the long run. "What we can say is that if something close to current rates should prevail over the coming decades and if corporate tax rates also remain near the low level businesses now enjoy, it is almost certain that equities will over time perform far better than long-term, fixed-rate debt instruments," he wrote. 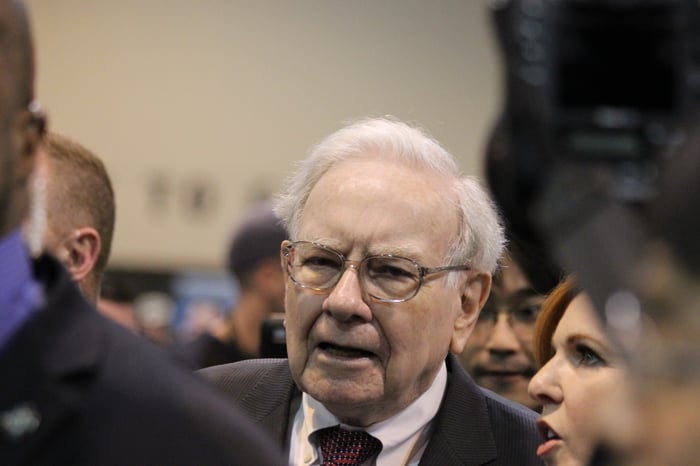 Warren Buffett continues to believe in the value of long-term investments in stocks. Image source: The Motley Fool.

Based on that analysis, the present bear market represents an excellent opportunity to deploy some of Berkshire's massive $128 billion cash pile.

Airline stocks have been particularly hard hit. Southwest Airlines stock has fallen 30% year to date, while shares of American, Delta, and United have all lost about half of their value -- even more, in United's case. That has left them trading at very low valuations relative to their 2019 earnings. Assuming the industry returns to its recent level of profitability over the next few years as the COVID-19 pandemic is beaten back, the valuations are quite compelling, as my Foolish colleague Lou Whiteman discussed earlier this month.

Delta Air Lines would be the most logical acquisition target. It's trading at a bigger discount than Southwest Airlines stock, and Delta has been far more profitable than American Airlines and United Airlines in recent years. In addition, Delta's market cap is larger than those of American and United put together. If Buffett's goal is to put a lot of money to work quickly, that makes Delta Air Lines a more attractive acquisition candidate. 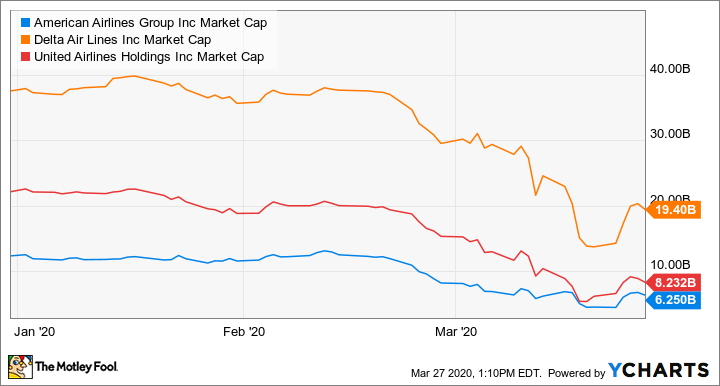 Berkshire Hathaway's fortress balance sheet could also increase the attractiveness of buying an airline like Delta right now. To some extent, airline stocks are trading at a discount because of short-term liquidity concerns. Those concerns would be moot following an acquisition by Berkshire Hathaway. In addition, nearly unlimited access to capital would enable a Berkshire-owned airline to continue investing during the current downturn, potentially leading to long-term competitive advantages relative to rivals that are slashing spending to conserve cash.

The case for selling

Buffett is a seasoned, long-term investor. He's not the type to panic and sell all of Berkshire Hathaway's airline stocks just because they have plummeted in value over the past few weeks. (Indeed, most of Berkshire's stock portfolio has fallen significantly this year.)

However, Buffett might sell if his investment thesis changes. When Berkshire Hathaway made its big airline investments, the sector was routinely turning in double-digit pre-tax margins and producing ample free cash flow. It appeared that after decades of consolidation and failures of some weaker airlines, the remaining U.S. airlines were high-quality businesses that would be consistently profitable.

The COVID-19 pandemic has dealt a big blow to that thesis. Buffett may believe that the pandemic is a once-in-a-century event and that the big losses airlines will post in 2020 are an anomaly. Yet it's also possible that the events of the past month will serve as a reminder to him of just how dangerous the airline business is.

Buffett has shown that he's willing to walk away from big bets when his opinion about a stock changes. For example, Berkshire Hathaway made a big bet on IBM in 2011 but unloaded its stake a couple of years ago below cost, after Buffett realized that Big Blue's competitive advantages were a lot smaller than he had previously believed. In similar fashion, Berkshire Hathaway could determine that better risk-adjusted returns are available elsewhere and sell its airline stocks.

Selling is more likely than buying

On balance, I think it is quite unlikely that Buffett will buy an airline. Most importantly, Buffett's investment strategy prioritizes owning high-quality companies over "cheap" companies, and it's hard to call any airline a high-quality business these days. Meanwhile, the recent stock market sell-off has made the valuations of genuine high-quality businesses more attractive.

In addition, to buy Delta, for example, Berkshire Hathaway would presumably be forced to sell all of its other airline stocks, collectively worth over $3 billion. That would reduce the net amount of cash deployed.

As for the prospect that Berkshire Hathaway will sell its airline stocks, it's a tough call. I expect airlines to bounce back over the next two or three years, with air travel demand eventually returning to strong growth. Nevertheless, I think there's a 50/50 chance that Buffett will revert to his previous attitude toward airlines, take his lumps, and move on.