The COVID-19 pandemic is poised to usher in a recession. These dividend stocks should weather the downturn well.

As of Friday, the coronavirus disease 19 (COVID-19) pandemic has caused the S&P 500 index to plunge nearly 25% since reaching its all-time high on February 19. Investors are naturally concerned that the fallout from the crisis will sink the United States into a recession, which will probably become known as the "Coronavirus Recession."

Given that our country's economy has come close to a grinding halt, it seems inevitable that a recession is on the near-term horizon. The only questions seem to be how deep and how long it will be.

Claudia Sahm, a former Federal Reserve principal economist who is an expert on recessions, is projecting a deeper downturn than the Great Recession, according to The Washington Post. However, the good news is that she believes that it "might not last as long if policymakers act boldly," writes the same source. The Great Recession lasted for 18 months, from December 2007 to June 2009.

If you're looking for stocks to weather a recession, your best bets are dividend-paying stocks of companies that provide products or services that most people consider essential.

Two great utility stocks worth considering buying are water utility giant American Water Works (AWK 2.02%) and electric utility and renewable energy behemoth NextEra Energy (NEE 1.16%). To be clear, both companies' financial results are poised to take a notable hit because many commercial and industrial operations in their service territories are temporarily shut down, but these should prove to be relatively short-term hits. 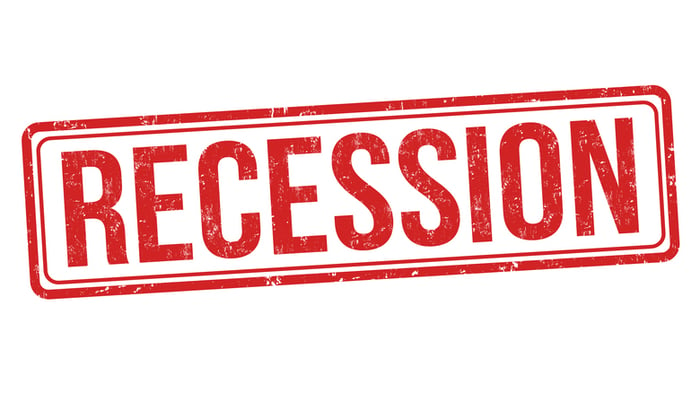 Data sources: Yahoo! Finance and YCharts. Data as of March 27, 2020. EPS = earnings per share. *Wall Street's consensus estimate. **Began trading in April 2008; it lost 12.7% of its value during the portion of the recession in which it traded.

Given the hoarding of toilet paper that's going on, an alien dropping down on our planet amid the coronavirus pandemic might get the idea that it's the most essential commodity that humans need to live. But we Earthlings know that excluding the air that we need to breathe, which is free, that honor belongs to fresh water. It's probably the very last thing consumers would cut back on during tough economic times.

That fact, combined with the fact that regulated water utilities are monopolies that have no competition in their service territories, makes them a great long-term investment.

American Water Works is a top choice in the water utility space. The company is the largest and most geographically diverse U.S. water and wastewater utility, with regulated operations in 16 states and a presence in 46 states. These traits provide it with an advantage in acquisitions in an industry that's steadily consolidating.

The company's dividend is modest, yielding just 1.7%, but it should prove very secure thanks largely to the essential nature of the company's product and its conservative dividend policy. Moreover, American Water has raised its dividend every year since going public in 2008.

NextEra Energy: Keeping the lights and TVs on for many Americans

During challenging economic times, some consumers and even businesses may cut down a little on their electricity use by using less heat or air conditioning, but most aren't likely to scale back a lot. That makes select electric utility stocks likely to hold up relatively well during recessions.

NextEra Energy, the largest U.S. electric utility, is my top pick in the industry. In fact, I owned the stock back when the company was named Florida Power & Light, or FPL. One of my main reasons for buying it many years ago is still a top reason to buy it today: The company's service territory is steadily growing in population. NextEra's two electric companies -- of which FPL is by far the larger -- provide power to more than 5.5 million residential and commercial customers in the Sunshine State.

Moreover, there's a more recent reason to favor NextEra Energy: Through its wholesale power generator subsidiary, it's the world's largest producer of renewable energy from the wind and sun. The cost of generating renewable energy has been steadily declining, which has been boosting the company's profits.

NextEra's dividend is currently yielding 2.4%. That's on the low side for the industry because the company's share price has run up so much over the years. Its dividend policy is on the conservative side, yet its strong business performance has enabled it to provide its shareholders with above-average annual dividend increases. In February, it raised its quarterly dividend by 12% and announced that it's aiming for a dividend growth rate of about 10% per year through at least 2022.

Why buy or even hold any stocks if a recession is probably coming?

The main reason to stay in the market is that market timing is notoriously difficult. If you get out entirely now, you risk missing the initial sustainable upturn -- and those tend to be like rockets.

That said, dollar-cost averaging (DCA) is more important than ever. DCA involves building your position in a stock by investing the same dollar amount at some set interval, such as monthly or quarterly. Doing so will prevent you from buying your entire position at what turns out to be a price peak for some time.