Please ensure Javascript is enabled for purposes of website accessibility
Log In Help Join The Motley Fool
Free Article Join Over 1 Million Premium Members And Get More In-Depth Stock Guidance and Research
By Rick Munarriz - Mar 31, 2020 at 10:25AM

The cloud-based platform providers are growing quickly, but the better stock from here isn't likely the same one that's been the winner if we look back.

Helping connect customers to companies is everything for Shopify (SHOP -1.51%) and Zendesk (ZEN -0.07%), even if we're talking about two entirely different cloud-based models. Shopify runs a fast-growing e-commerce platform that recently topped seven figures in the number of active merchants relying on its system to sell online. Zendesk offers online customer support and a growing number of customer-facing services to its more than 150,000 paid accounts.

Long-term investors have made out nicely with both investments despite recent setbacks. Zendesk shares have more than tripled since the start of 2017, even though the stock has shed nearly a third of its value since peaking last summer. Shopify has fared even better: It's actually a 10-bagger from the same 2017 starting line. The stock has also surrendered more than a quarter of its value since hitting all-time highs last month. Shopify and Zendesk are winners, but let's see which stock is the better buy from here. 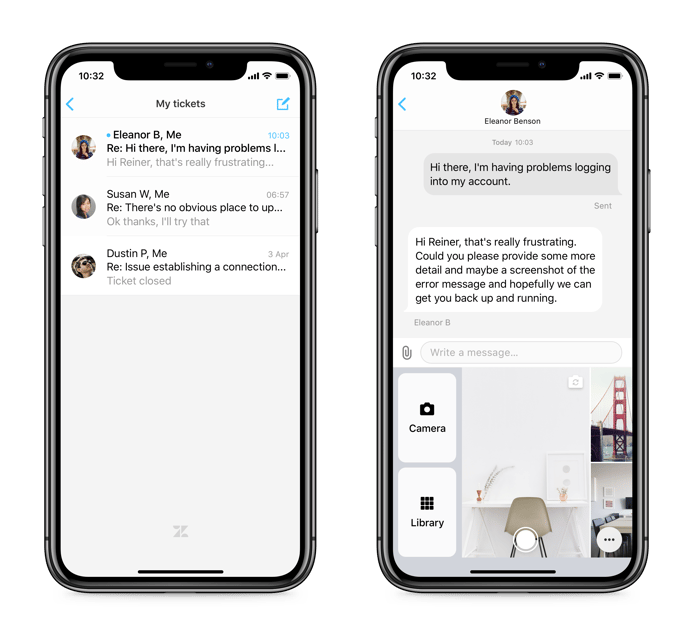 Shopify is growing faster than Zendesk. Shopify's revenue rose at a hearty 47% clip in its latest quarter, comfortably ahead of Zendesk's 34% top-line advance.

Deceleration has been the name of the game for both companies, though they each have had moments recently of lightly putting the pedal to the metal. Shopify's revenue growth actually accelerated in its latest quarter just as Zendesk picked up the pace on the top line for all of 2018. Both companies see healthy but decelerating double-digit revenue gains in 2020, with Shopify eyeing 35% to 37% growth for all of 2020, and Zendesk modeling a 29% to 31% increase. These outlooks were put out in early February, so given the current global health crisis, it wouldn't be a surprise if they are revised lower when Shopify and Zendesk report in early May.

Both companies are doing a great job engaging their clients. They continue to roll out new offerings, taking advantage of having a strong foot in the door to expand into related services. Zendesk's dollar-based net expansion rate -- a metric that measures how much more existing customers are spending now through its platform than they were a year earlier -- is currently at 116%. In short, established clients are spending 16% more over the past year than they were the year before. There are a few market-fave software-as-a-service (SaaS) stocks with net expansion or retention rates of 130% or slightly higher, but Zendesk is within the tight range of 115% to 120% that it has been posting through the past three years.

Shopify is also doing a good job of milking more revenue out of its growing account base with its revenue from merchant solutions continuing to grow faster than subscription solutions. The sellers on its platform that have been around for more than a year have grown the gross merchandise volume at an average monthly rate of 21%.

The last time that I pitted Shopify against Zendesk was in the fall of 2018. I tapped Shopify as the better buy, and that call panned out nicely. Shopify stock has gone on to rise 162%, with Zendesk shares actually sliding 8% lower in that time.

We're in a tricky operating climate these days with the coronavirus, and both companies are vulnerable to any recessionary slowdown that awaits at the other end of this crisis. It's easier to see the demand for customer support holding up better than a shopping gateway. Overall top-line growth is also decelerating slower for Zendesk than for Shopify. In terms of valuation, Shopify has earned the right to trade at a premium to Zendesk, but it's commanding a trailing revenue multiple that is three times higher than Zendesk's. Look out to next year and Shopify's adjusted earnings multiple is six times higher than Zendesk's.

Shopify has earned its keep as a market darling, and it's certainly feasible to see both stocks come out ahead if the recessionary impact isn't as cruel as some economists are predicting. But in terms of the better buy right now, I'll go with Zendesk this time.