Union Pacific (UNP 0.56%) is in the midst of a two-year process of implementing its Unified Plan 2020, which is an initiative announced in late 2018 and designed to improve efficiency on its lines and "secure our place as the industry leader in safety, service and financial performance."

Union Pacific is one of the largest railroads in the United States based on track miles, with more than 32,000 miles serving the western two-thirds of the country. It operates from all major West Coast and Gulf Coast ports, and has links to the Canadian rail system. It is also the only railroad serving all six major "gateways" between the U.S. and Mexico.

Railroads make large investments in fixed assets, which require a large amount of traffic in order to maximize profitability through a return on those assets, requiring speed and efficiency. In addition to making new investments in its fixed assets, the company seeks to better utilize them through the Unified Plan 2020 -- Union Pacific's version of the industry's move to "precision scheduled railroading," which seeks to improve operating margins and overall efficiency.

Union Pacific notes that for it, precision scheduled railroading (PSR) involves focusing on keeping cars moving. The old system resulted in delays as it tried to put together long trains that moved faster, the company said, but with PSR, "instead of waiting for a long train to be built, trains are always moving and cars are picked up on schedule, regardless of train length." 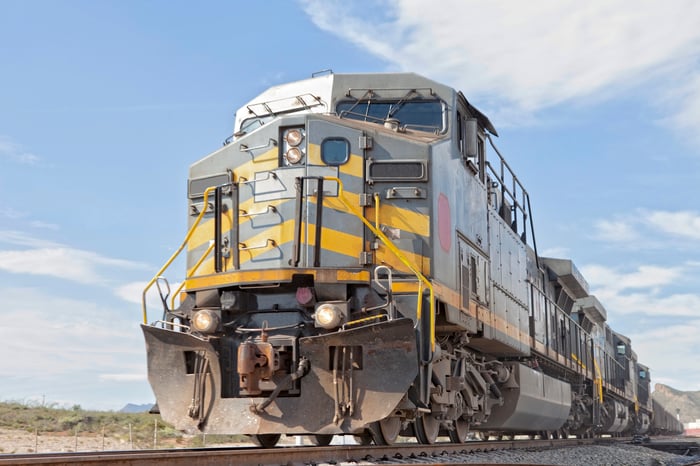 The implementation of the Unified Plan has already improved freight car velocity to 220 miles per car in 24 hours at the end of 2019, up from 209 a year earlier, and reduced the amount of time a car sits in a terminal awaiting movement to its destination (dwell time) to an average of 23.3 hours, a 13% improvement from the year-ago period. Average train speed increased to 26.2 miles per hour, from 26.

The company's plan includes safety initiatives as well as offering logistics support to customers in the form of streamlined interfaces, better notifications, and improved local inventory reporting. The annual report noted that the operating ratio was a record 60.6% in 2019, down from 62.7% in 2018. This industry ratio is a measure of operating expenses as a percentage of revenue, and a lower number implies increased profitability.

The company has continued to increase capital investment the past three years, including investment net of depreciation amounting to almost $3.7 billion. In particular, Union Pacific has made a large investment in the Butler Intermodal Terminal in central Iowa, which the company expects will provide an alternative to larger freight hubs and a competitive alternative to long-haul trucking. The terminal opened late last year.

According to the Association of American Railroads, the U.S. Department of Transportation forecasts domestic freight volumes will increase 30% by 2040. This indicates the need for continued new investment in rail assets, and the need for railroads to operate as efficiently as possible.

Union Pacific has exposure to the lucrative Asian market due to its routes linking Pacific Coast ports to the Midwest, with subsequent connections to the East. The high volumes of imports via the Pacific Coast are a sustainable long-term source of revenue.

The ongoing trade dispute between the U.S. and China has affected volumes, but the Phase One trade deal in December has brightened the near-term outlook, and long term the trade routes across the Pacfic will remain important to the U.S. economy.

COVID-19 is a factor

Consumer spending is the primary driver of the U.S. economy, and has remained strong over the past decade, however, the COVID-19 pandemic has caused a lockdown of large portions of the economy and this makes the future uncertain. Union Pacific says it has been addressing the fallout from this chain of events by the implementation of "business continuity plans" that include identifying employees essential to maintaining operations. Border restrictions among the U.S., Canada, and Mexico are in place for non-essential travel, but do not apply to freight shipments related to international trade, and the company does not expect cross-border shipments to be impacted. It noted that "railroads play a critical role in ensuring continuity of functions critical to public health and safety, as well as economic and national security."

Union Pacific's sensitivity to economic activity will likely negatively impact the company in the near term, but it should recover long term. The diversity of the goods it transports offers at least a modest amount of insulation as food and energy products continue to move.

Recent performance has demonstrated the company's long-term value. Diluted earnings per share (EPS) increased 65% over the past three years. The cash dividend has increased 48% over the past two years (including two 10% increases in 2019) and the company has continued to repurchase shares. These moves were partly fueled by the company's aggregate tax rate falling to about 24% in 2019, from about 37% in 2017, as a result of the tax reform act. Although this provided a short-term boost to relative results, the lower rate will remain in effect for the foreseeable future. Union Pacific has also benefited from declining oil prices, which helps to restrain operating expenses. Railroads are much more fuel-efficient than trucks, and the company is working to convert truck traffic to rail.

Overall, Union Pacific has positioned itself for long-term success through investment in its capital base, and implementing the Unified Plan to maximize the profitability of those assets.