The coronavirus pandemic's effect on the world's economy is hurting the payment card leader.

Since it works on the front lines of the global economy, Visa (V 1.12%) is being negatively affected by the slowdown related to the worldwide SARS-CoV-2 coronavirus outbreak. On Monday, in a regulatory filing made after market hours, the card payments giant reported a discouraging set of metrics, and adjusted its guidance accordingly.

All told, the number of processed transactions fell by 2% month-to-date in March, while still in the black at a 9% clip quarter-to-date. 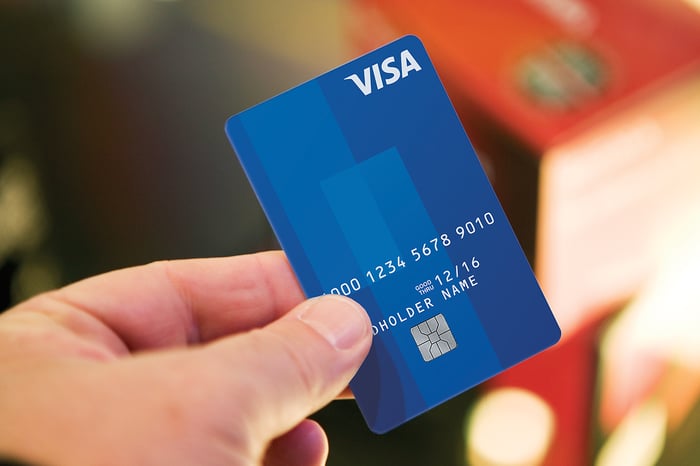 "As countries have imposed social distancing, shelter-in-place or total lock-down orders, domestic spending, most notably in travel, restaurants, entertainment and fuel, has sharply declined week on week with a meaningful deterioration in volume and transaction trends in the second half of March," Visa wrote in the filing.

In light of these developments, the company trimmed its guidance for the current second quarter of its fiscal 2020 -- for the second time in recent weeks. Visa now expects net revenue to rise on a nominal-dollar basis in the mid single-digit percentage range (going by generally accepted accounting principles) compared to the same quarter of last year. Diluted earnings per share should grow at what the company described as the "high end of low single-digit" percentages. It didn't get more specific.

Visa's shares rose more cautiously than other top stocks and the major market indexes on Monday, advancing by just under 2.5%. They fell marginally in after-hours trading in the wake of the filing.