Please ensure Javascript is enabled for purposes of website accessibility
Log In Help Join The Motley Fool
Free Article Join Over 1 Million Premium Members And Get More In-Depth Stock Guidance and Research
By Royston Yang – Apr 1, 2020 at 11:48AM

The stock is still on a roll despite the rapid spread of COVID-19.

Zoom Video Communications (ZM 4.87%) has seen its stock more than double in 2020, reaching an all-time closing high of $151.70 in late March. The remote conferencing services company was only founded nine years ago but has since stepped into the big leagues, competing against the likes of Cisco's Webex and Microsoft's Skype.

Though many have pointed to Zoom's rich valuation as a reason why the stock's rise is unsustainable, the current COVID-19 pandemic presents a unique opportunity for the company to grow both its revenue and market share. The market may be pricing in significant future growth in demand for the company's services, while also projecting that videoconferencing may be a much larger part of doing business moving forward.

Here are three reasons why I believe Zoom's valuation is justified. 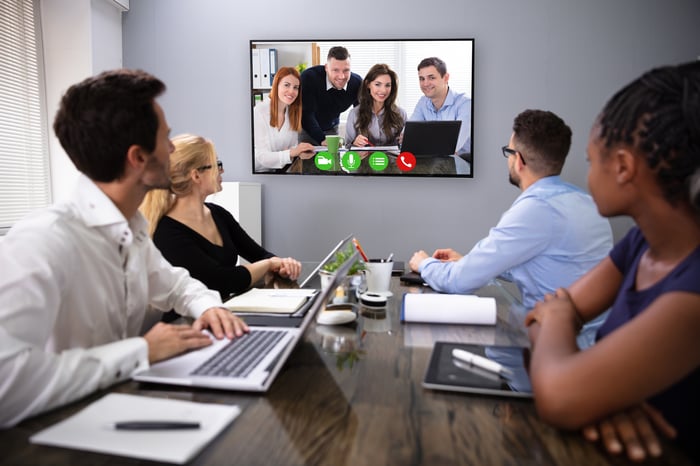 The launch of Zoom Phone, a unique cloud-based PBX system, in 2019 helped the company create a unique, video-first unified communications platform. PBX (or "Private Branch Exchange") is a telephone system that switches calls between users on local lines, while enabling all users to share a certain number of external phone lines. Zoom Phone enables companies to replace their legacy PBX solutions and assists them in consolidating all business communications and collaborations onto the Zoom platform.

This new system would significantly expand Zoom's total addressable market (TAM) as it allows them to target customers with existing PBX phone systems that can be converted to an all-in system to solve their communication bottlenecks and problems.

As Zoom is a software-as-a-service (SaaS) company, its medium-term contracts provide good revenue visibility and also creates "sticky" customers. Once customers switch over to Zoom, it would be both troublesome and time-consuming to attempt to port over to a new, competing system.

CEO Eric Yuen had mentioned during the company's fiscal fourth-quarter earnings call that a major blue-chip customer, Johnson and Johnson, had signed up with Zoom. The company also deployed Zoom Phone for another customer, VMware, to allow it to remotely access all its applications while ensuring security and compliance.

These two examples show that the company is gaining traction in signing on larger accounts and major customers. This momentum could trigger a virtuous cycle as more companies begin to trust Zoom's capabilities and sign on with them in due course. At the end of fiscal 2020, Zoom had approximately 81,900 customers with more than 10 employees, up 61% year over year. Of these, 641 were contributing more than $100,000 in trailing 12-month revenue -- this cohort had similarly grown 86% year over year.

Even after COVID-19 subsides, companies and businesses may permanently alter the way they operate, thus speeding up the adoption of videoconferencing tools and software like those offered by Zoom. This structural change had already occurred before the onset of the pandemic but has been accelerated by the outbreak as many countries implement social distancing and self-isolation guidelines to curb the spread of the coronavirus.

The company is also doing its part by providing its videoconferencing tools to K-12 schools for free as schools around the U.S. shut down. As students embrace home-based learning and schools start using Zoom's software and platform, this may alter the way the education system operates in the future. And by letting the education industry experience the convenience of online teaching and instruction through the company's software, Zoom's generous gesture may have just sealed some future contracts for the company.

Zoom is obviously on a roll now, but it's undeniable that its high valuation may make some investors uncomfortable. The stock trades at 300 times trailing free cash flow as of this writing. While that triple-digit figure is indeed shocking at first glance, it is set to come down significantly as the company has rapidly grown its free cash flow generation, while capital expenditures remain low.

Though the company has grown its revenue by leaps and bounds, it's fair to point out that it had only just broken even during fiscal 2019. Zoom has also had a rather brief history as a public company, only coming to market a year ago in April 2019.

My advice to investors who are wary of Zoom's valuation is to take on a smaller position within your portfolio. This effectively mitigates the risk of the high volatility that comes with the stock while still giving you an opportunity to enjoy any upside from a continued rally.