Please ensure Javascript is enabled for purposes of website accessibility
Log In Help Join The Motley Fool
Free Article Join Over 1 Million Premium Members And Get More In-Depth Stock Guidance and Research
By Dan Caplinger – Updated Apr 1, 2020 at 11:38AM

Wednesday morning didn't bring any relief to Wall Street, as investors continued to worry about the short- and long-term impacts of the novel coronavirus pandemic on the global economy. Warnings from President Trump about how difficult the coming few weeks are likely to be weighed on sentiment, and news from various state and local government officials suggesting that disruptions to daily life could last longer than anticipated raised new questions about the ability of many businesses to weather the crisis. As of 11 a.m. EDT, the Dow Jones Industrial Average (^DJI -1.62%) was down 593 points to 21,324. The S&P 500 (^GSPC -1.72%) fell 78 points to 2,506, and the Nasdaq Composite (^IXIC -1.80%) dropped 179 points to 7,521.

The retail sector has taken a huge hit as a result of the COVID-19 outbreak, with many retailers having had to close their store operations entirely. Given the challenges that brick-and-mortar retail companies already faced even before the coronavirus hit, the loss of sales in store locations has hurt them at a time when they're least able to absorb the blow. That spelled bad news for Macy's (M -0.44%), Tapestry (TPR -4.17%), and Capri Holdings (CPRI -4.92%) Wednesday, and a disturbing trend could spread throughout the industry if there's no relief soon.

Macy's, Tapestry, and Capri all faced the dubious distinction of having their bond ratings cut. Rating analysts at Fitch reduced their rating on Macy's from BBB- to BB+, while doing a double downgrade on Tapestry's rating from BBB- to BB. Capri's former BBB- rating also moved lower to BB+, sending its stock down 14%. 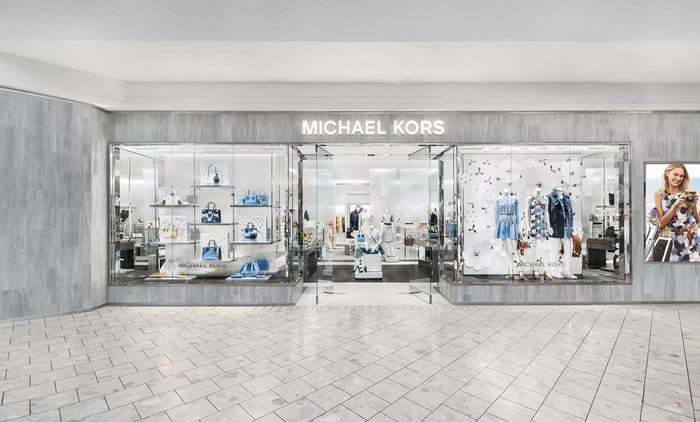 The move measures Fitch's long-term estimate of how likely the companies are to default on their outstanding debt. In making the assessment, Fitch noted that the retailers face two different but equally scary threats. In the short run, the fact that the retail companies are having their in-store sales activity interrupted will have a marked impact on revenue and cash flow, making it harder to support their debt payments in the near term. From a longer-term perspective, Fitch noted that even after the worst of the coronavirus outbreak has passed, consumers could face a recession that will make them less likely to spend on discretionary purchases.

Moreover, the downgrades are especially important because they take the three companies out of the realm of investment-grade debt and put them instead into the high-yield debt market -- aka the junk bond market. That will increase the interest these issuers have to offer in order to raise capital in the future, which is more likely than ever because of the negative economic impacts from the coronavirus.

Macy's, whose shares fell 3%, also suffered the indignity of getting ejected from the S&P 500 index. With a market capitalization of just $1.5 billion, the retailer had shrunk below the level at which the large-cap index typically keeps ailing companies as their value diminishes.

Can these retailers recover?

To bounce back, retail companies will have to get through increasingly tough conditions. Macy's has already furloughed thousands of its workers to try to save cash. Tapestry, which sells the upscale Coach line of handbags and accessories and whose shares were down 12% Wednesday morning, suspended its dividend and stock repurchases and is relying on borrowings for expense management. And Capri, parent of Michael Kors, has already warned about the financial impacts it's seeing from the coronavirus.

At this point, it's impossible to know just how bad those conditions could get. As they fight to survive, these three retailers will have to work a little bit harder to overcome the pressure of having a junk bond rating.