The multi-use product company is outperforming the market significantly in 2020.

Given that the market is worried about the possibility of the global economy being tipped into recession by the measures taken to contain the COVID-19 pandemic, it's somewhat surprising to see such a move. After all, demand for WD-40's core product, a multi-use oil, lubricant, and cleaner of the same name, is also going to be tied to economic activity. 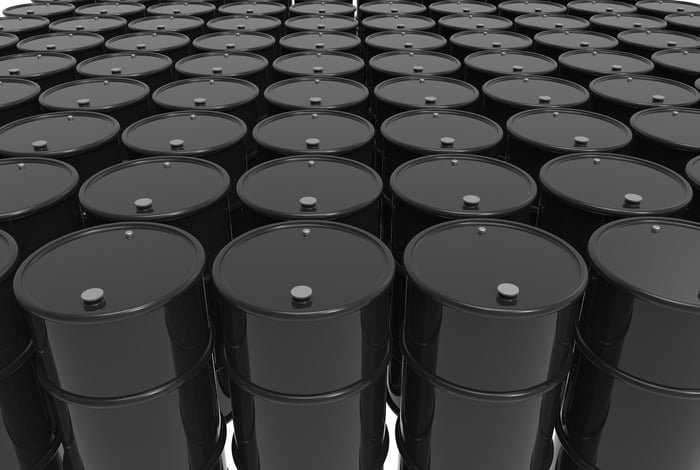 The answer to the conundrum probably lies in the slump in the price of oil in 2020. The commodity is a key cost component for the company. In fact, it's mentioned in the company's SEC filings as a risk factor: "The primary components and raw materials for the Company's products include petroleum-based specialty chemicals and aerosol cans, which are manufactured from commodities that are subject to volatile price changes."

Of course, risk can also be positive, and in this case the crash in the price of oil to around $20 a barrel from around $60 at the start of the year is being seen as a net positive by investors.

The following chart helps to explain matters. Focusing on the 2014-2017 period when the price of oil slumped from around $100 to less than $40, it clearly led to an improvement in gross margin, which kept gross profit rising even as revenue performance was lackluster. It appears that investors are hoping for more of the same in 2020. 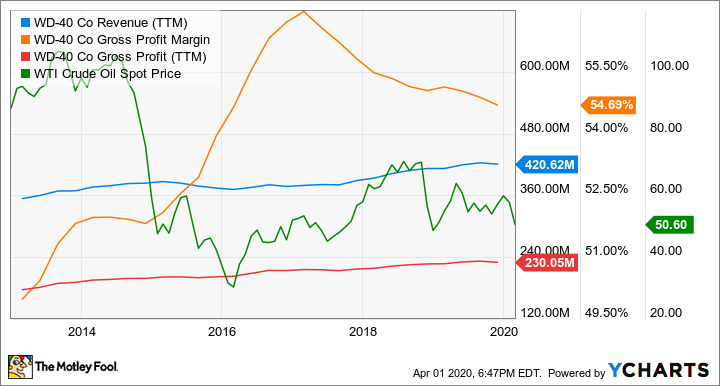 It looks likely that WD-40 will receive a margin boost from the fall in the price of oil and petroleum-based chemicals, and its aerosol cans may also be relatively cheaper for similar reasons. That's all well and good, but there's also the problem of end demand potentially taking a hit due to the sudden cessation of economic activity.

Moreover, WD-40 uses third-party contract manufacturers in many countries including Canada, the U.S., the U.K., Italy, South Korea, India, and China -- all have been significantly affected by the novel coronavirus. As such, it's hard not to think that WD-40 won't have had, or will have, some supply chain issues in 2020.

Wait and see. The fall in commodity prices is good news, but the jubilation in the stock price may prove short-lived, particularly when you consider that the stock trades on a PE ratio of 48 times its current earnings. That's a valuation that implies a fair amount of optimism -- a tricky thing to have in the current environment.