Used-car retailing giant CarMax (NYSE:KMX) released fiscal fourth-quarter 2020 earnings results on Thursday before the markets opened, and if not for a high amount of uncertainty going forward, investors likely would have applauded the report. The country's largest used car sales venue reported double-digit revenue growth on unit sales expansion of nearly 15%. Let's review results of the last three months, while also discussing the immediate impact of the coronavirus on CarMax's business. Note that all comparative numbers below refer to those of the prior-year quarter.

CarMax results: A bird's-eye view of the numbers 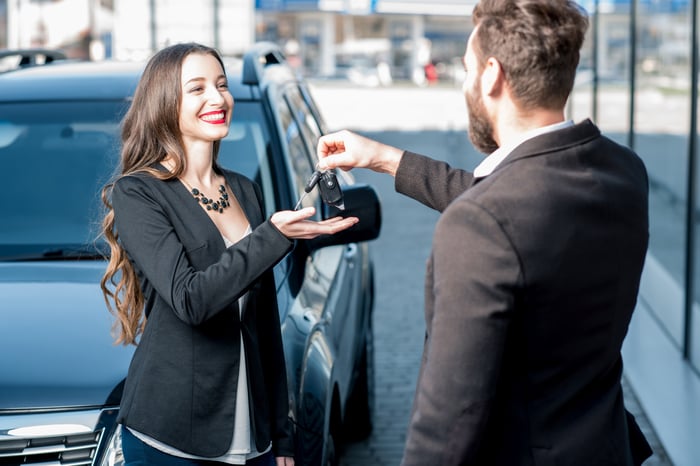 CarMax's vigorous fourth quarter ended on Feb. 29, just as the impact of the COVID-19 pandemic began to quickly escalate in the U.S. The following excerpt from the company's earnings press release gives a succinct overview of the condition of sales over the last four weeks:

The positive sales momentum experienced in fiscal 2020 carried into the beginning of March, with robust comparable store used unit sales through the first week of the month. Since then, the Coronavirus situation within the U.S. has rapidly escalated and sales have dropped significantly. Over the past few weeks, approximately half of our stores have closed or are running under limited operations. For our stores that are open, consumer demand has progressively deteriorated.

Essentially, CarMax has joined the ranks of companies that have seen their sales drastically curtailed. The company outlined a number of steps that it has taken to deal with plunging revenue. CarMax has drawn on its revolving credit facility and as of March 31, had $700 million in cash on hand, with an additional $300 million of still available on the credit facility.

In addition, CarMax reported that it had $2.5 billion worth of inventory on its books on March 31. This asset is less liquid than cash, of course, but can be converted to cash through stores that remain open and the company's "omnichannel" (online) platform, which is now available to about 60% of its customer base.

Management also relayed that in addition to $1.1 billion in obligations under its credit facility, CarMax holds $1.4 billion in long-term debt, but fortunately, it doesn't have any near-term debt maturities to worry about. Finally, the company pointed out that it owns the real estate and buildings at 140 of its 200 stores, and that this owned real estate has a net book value of $1.8 billion.

Of course, with so much uncertainty about the length of coronavirus-related shutdowns and quarantines across the U.S., the company couldn't offer any forward guidance on Thursday. The auto retailer informed shareholders that it's taken the prudent steps of halting share repurchases and current-year store expansion, while aligning expenses with sales levels. Shares of CarMax lost 4% in Thursday's trading session.