Chloroquine and hydroxychloroquine aren't approved by the Food and Drug Administration to treat COVID-19, the disease caused by the novel coronavirus, but the agency has granted an emergency-use authorization for the drugs, which were originally developed to treat malaria.

In Europe however, regulators are taking more of a wait-and-see approach, suggesting doctors only prescribe the drugs to patients taking them for the diseases they're approved for. Hydroxychloroquine, which is less potent but safer than chloroquine, is also used for autoimmune diseases, such as lupus and rheumatoid arthritis.

"Prescriptions should not be given outside their authorised uses except in the setting of a clinical trial or nationally agreed protocols," the European Medicines Agency said in a statement. 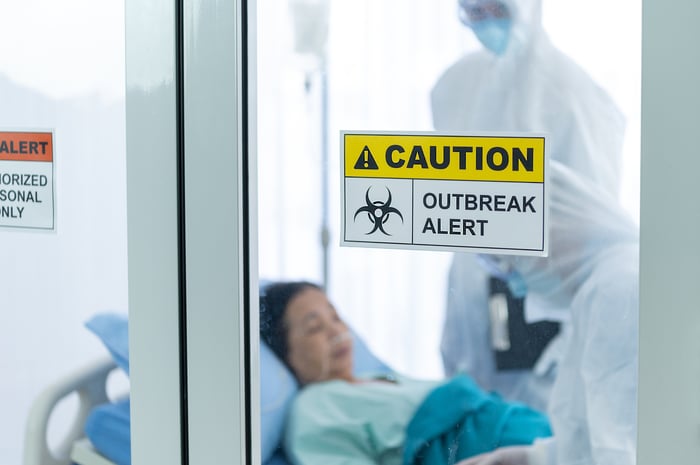 Data from initial studies of chloroquine and hydroxychloroquin in COVID-19 patients has been somewhat positive, but the studies have been fairly small. A study of hydroxychloroquine plus the antibiotic azithromycin in France only had 20 treated patients in it. A study in China was a little larger with 62 patients, split equally into treatment with hydroxychloroquine or the control group.

By contrast, the University of Minnesota is running a 3,000-patient study of chloroquine. Larger studies will be needed to know for sure whether the drugs are helping patients.

Multiple drugmakers, including Bayer (BAYR.Y -0.74%), Teva Pharmaceutical (TEVA 0.11%), Novartis (NVS -1.10%), Mylan (MYL) and Amneal Pharmaceuticals (AMRX) have committed to donating chloroquine or hydrochloroquine tablets or have announced plans to ramp up production of the drugs.