Please ensure Javascript is enabled for purposes of website accessibility
Log In Help Join The Motley Fool
Free Article Join Over 1 Million Premium Members And Get More In-Depth Stock Guidance and Research
By Jeremy Bowman - Updated Apr 2, 2020 at 8:10AM

The tobacco maker already faced challenges before the coronavirus outbreak. Should investors sound the alarm?

In modern investing history, almost no dividend stock has been as reliable as Altria (MO -0.63%), the domestic owner of Marlboro. The tobacco company has raised its dividend 54 times in the last 50 years  . According to Wharton professor Jeremy Siegel, the stock was by far the top performer in the market from 1968-2017, generating an average annual return of 20% annually with dividends reinvested.

It's no surprise then that Altria has been a longtime favorite of dividend investors, and its 9% yield is especially appealing in today's market. In ordinary circumstances, Altria would be considered a rock-solid dividend stock, but the coronavirus outbreak has thrown the normal course of the business around the world off track, and that has had consequences even in the tobacco industry. 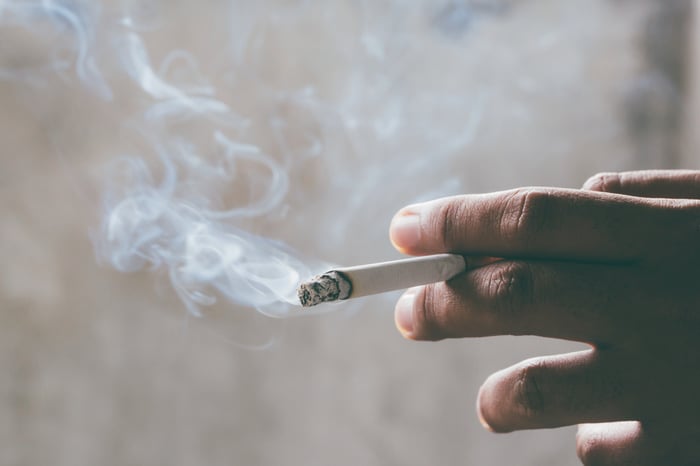 Altria and the coronavirus

You might think that the tobacco sector would be insulated from the upheaval around the coronavirus pandemic as tobacco is generally a recession-proof product. Smoking is addictive, and stressful situations often trigger an increase in habits like smoking. Altria's COVID-19 problems aren't driven by demand issues, though.

First, CEO Howard Willard had tested positive for COVID-19 and took a medical leave of absence as of March 19. CFO William Gifford has temporarily taken over his responsibilities, though it's unclear how long the 56-year-old Altria chief will be out for.  An extended absence could pose a risk to the company at a difficult time.

More concerning was that the company said the same day that it was temporarily suspending manufacturing at its Richmond, Virginia plant, its primary production facility, after learning two employees had contracted the virus.  Altria said it would suspend production for two weeks, though the stoppage could go longer depending on how the coronavirus situation plays out. At the time, Philip Morris USA, the Altria subsidiary that includes Marlboro, had finished goods cigarette inventory equivalent to about two months' supply. In other words, the company could run into problems if its factory is closed for two months or longer.

Finally, on March 26, the company drew down the entirety of its $3 billion credit facility, following in the footsteps of retailers and other companies struggling to cope with the impact of the coronavirus. Management said it was borrowing that cash "as a precautionary measure to increase its cash position and preserve financial flexibility."  Some of the proceeds will be used to fund its dividend, general corporate purposes, and payments associated with the Tobacco Master Settlement Agreement, the result of the landmark 1998 lawsuit against the tobacco industry.

That decision frees up liquidity, but it also adds to the company's $27 billion debt burden, and weakens a balance sheet that has already been inflated by goodwill and intangible assets.

Prior to the coronavirus outbreak, Altria was facing considerable challenges. To diversify away from cigarettes, which have been in decline for years, the company made two bold moves at the end of 2018. It took a 35% stake in Juul Labs, the leading maker of e-cigarettes, for $12.8 billion, and acquired a 45% stake in Canadian marijuana grower Cronos Group (CRON -6.45%), for $1.8 billion. Neither investment has fared well. It has twice been forced to write down the value of its Juul investment after regulatory scrutiny led Juul to stop making most of its flavored pods and cease most advertising. Altria now values its stake in Juul at just $4.2 billion. Shares of Cronos, meanwhile, have lost about 50% of their value since Altria made that deal as marijuana stocks have largely underperformed since then.

Right now, the biggest risk for the company is that its Richmond plant will remain closed past the two weeks the company had allotted, which end April 2. If the plant remains closed for several weeks longer, that could provoke a run on cigarettes and lead to shortages before its estimated two-month supply is exhausted. Given that the coronavirus outbreak has not yet peaked, Altria is likely to continue the plant closure, though investors should expect an announcement on that soon.

The silver lining for investors here is that these risks appear to be priced into the stock. Altria's dividend yield has soared to 10-year highs, and the stock price is at a five-year low. Cigarette consumption isn't about to disappear, and even an extended closure at the Richmond facility shouldn't impact the company's ability or commitment to paying its dividend, as management has already shown it's willing to borrow in order to fund it.

While Altria stock could still head lower in the coming weeks, income investors may want to take advantage of its sky-high yield today.