Shoppers stocked up on essentials online as the coronavirus outbreak kept them out of the stores.

While stocks entered a bear market in March, shares of Amazon (AMZN 2.22%) resisted, rising 3.5% during the month, according to data provided by S&P Global Market Intelligence. Amazon climbed as the coronavirus outbreak kept shoppers at home -- and ordering online.

Though the U.S. hasn't issued a lockdown order for the entire country, in March governors of states including California and New York urged residents to stay home. As cases mounted -- now totaling more than 850,600 -- consumers stocked up on the essentials. Amazon said it was creating 100,000 full-time and part-time positions in the U.S. in fulfillment centers and delivery to meet demand. The company also is spending more than $350 million worldwide to boost pay by $2 or the local currency equivalent for employees in fulfillment, transportation, stores, and delivery through the end of April. 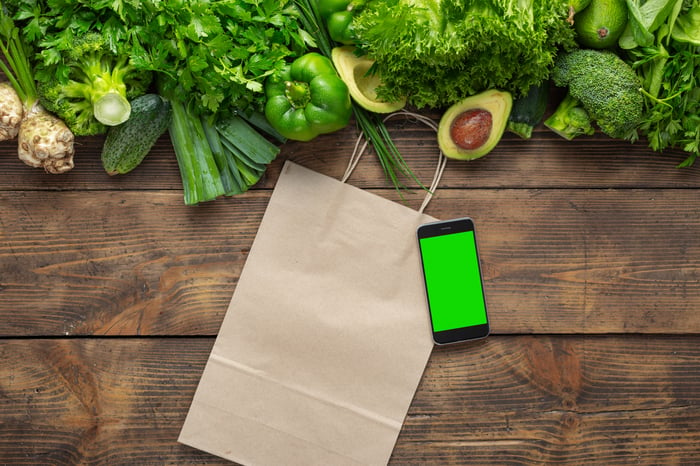 Though Amazon hasn't given details of exactly how much demand has increased, industry statistics show that companies selling groceries online are seeing a considerable surge. Digital Commerce 360, citing Rakuten Intelligence, reported the dollar value of online grocery orders from March 12 through March 15 surged 210% and the number of orders climbed 151% year over year. This may translate into favorable revenues in the quarter -- a quarter that will be difficult for many other companies as the outbreak has kept people out of stores and has disrupted manufacturing, transportation, and other industries.

Looking forward, it will be important to see how this spike in demand transitions into normal times. It would be unrealistic to expect the same levels of demand seen during the crisis to continue beyond it. But we could hope that customers who gave online grocery shopping a try or a Prime membership a try during the crisis might like the experience and continue. Prior to the outbreak, Amazon predicted first-quarter 2020 net sales would climb between 16% and 22% to as high as $73 billion.

Investors should keep their eyes on the first-quarter report, with special attention to any comments on Prime subscriptions. A significant increase in membership to the program, since it does involve an annual fee, may be indicative of sustained demand in the months to follow.