Please ensure Javascript is enabled for purposes of website accessibility
Log In Help Join The Motley Fool
Free Article Join Over 1 Million Premium Members And Get More In-Depth Stock Guidance and Research
By Justin Cardwell - Apr 3, 2020 at 7:30AM

Aside from some minor dips here and there, Costco (COST 1.33%) has been a steady growth stock for much of the past two decades. More recently, earnings per share (EPS) has shown a 9% compound annual growth rate (CAGR) from 2015 to 2019 in addition to a revenue CAGR of 5.6% over the same period. Costco's share price continues to trade at a heavy forward price-to-earnings ratio of 32.4 against the sector median of 15.8 -- pricing that suggests continued growth for the big-box retailer.

For some investors, the question arises as to whether Costco can maintain this growth trajectory. There are several factors that make owning shares of Costco -- despite its larger-than-average forward multiple -- a worthy investment. Here are three reasons that suggest Costco will continue to grow in the long term. 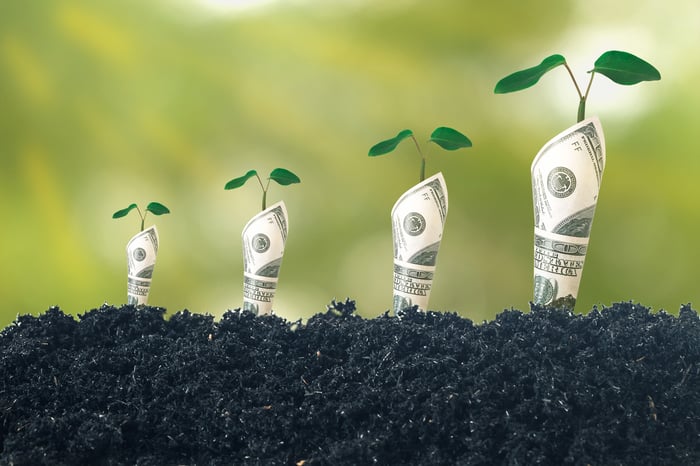 Costco's revenue in 2019 was $152.7 billion, growing 11.4% year over year. But, because of Costco's business model of discount pricing and tight margins, not a lot of that revenue makes it down to the bottom-line profits. The growth that really reflects Costco's value is the company's yearly paid memberships. The majority of Costco's profit is derived from its membership fees. In 2019, Costco had 53.9 million paid members globally, generating nearly $3.35 billion for the year -- funds that nearly all go toward net income totals.

Net income for 2019 was $3.66 billion, most of which came from the membership fees. Year-over-year growth in membership was 6.7% from 2018 to 2019, and Costco reported during the second quarter of fiscal 2020 that membership grew 6.2% over the 24-week period ending Feb. 16. This shows slight weakness in comparison to 2019 growth, but it was expected in current market conditions.

The ability to grow membership year over year provides financial protection for the company during volatile market conditions as Costco is not fully reliant on merchandise sales to generate profit as the company maintains low overhead.

2. An increasing focus on e-commerce and delivery

Costco is starting to deliver on the e-commerce side of the business, showing a 17.9% increase in e-commerce revenue over the 6-month period ending March 1. To help the e-commerce growth along, Costco acquired Innovel Solutions in mid-March for $1 billion. Innovel is a logistics company that specializes in storage, transport, and delivery of "big and bulky" items.

Innovel states that the company can reach "90% of the U.S. and Puerto Rico." This enables Costco to more easily deliver large items to customers, which enhances the opportunities for it to sell bulky merchandise. As the United States and Puerto Rico make up 547 of Costco's 786 warehouses in operation, Costco's large item delivery reaches 70% of the customer base.

The two companies have been in partnership since 2015; however, buying Innovel from the previous owner, Sears-operator Transform Holdco LLC, will give Costco more control and flexibility over the direction and growth of the e-commerce shipping platform -- incentivizing additional memberships with the convenience of delivery.

Costco's forward dividend yield of 0.9% isn't anything to write home about, but the dividend has been growing for 15 years, with a five-year CAGR of 14.5%. A very low debt-to-EBITDA (a ratio used to determine the number of years worth of earnings a company would need to pay off debt) of 1.18 shows shareholders that Costco's leverage is low, indicating a strong balance sheet and a strong likelihood of continued dividend payouts.

The forward price-to-earnings ratio of 32.4 is high for a retail-sector stock but properly valued with Costco's growth trajectory, as the company is investing strategically in e-commerce in addition to maintaining a strong business model. Costco may look expensive compared to Walmart's (WMT 5.11%) forward P/E of 21.8 (Walmart's Sam's Club is a competing big-box retailer), but Costco is delivering a higher three-year EBITDA CAGR of 8.7% against Walmart's 0.1% in addition to the year-over-year revenue growth of Costco's 7.6% against Walmart's 1.9%.

A good bet on the long term

Costco will continue to grow over the long term as the company invests in e-commerce, drives membership growth, and maintains a low debt exposure. Reaction to the coronavirus pandemic has actually helped Costco drive sales above original expectations, which Costco's President and CEO Craig Jelinek states as a "surge of business."

The near-term outlook for Costco is too hard to accurately forecast as the coronavirus pandemic is creating so much uncertainty for businesses. However, any opportunity to purchase shares of Costco below the 52-week high of $325 per share is a discount compared to where the company is very likely headed long term.