Please ensure Javascript is enabled for purposes of website accessibility
Log In Help Join The Motley Fool
Free Article Join Over 1 Million Premium Members And Get More In-Depth Stock Guidance and Research
By Royston Yang – Apr 3, 2020 at 6:41AM

Vacation bookings are not going to recover back to pre-COVID-19 levels anytime soon.

This brings its year-to-date tumble to around 35% for the online travel agency. 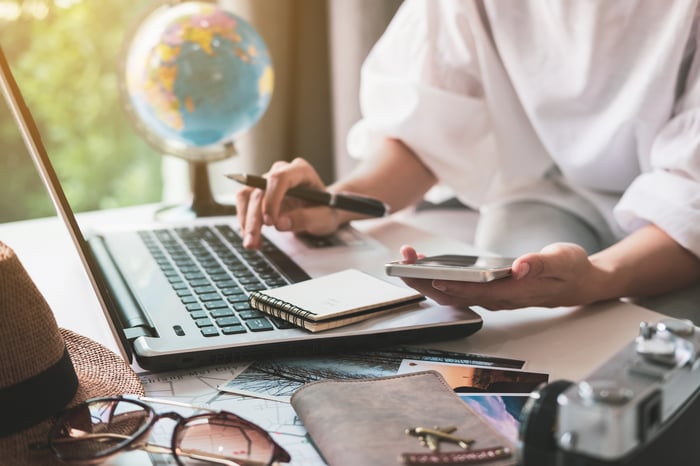 With the explosion of cases of COVID-19 around the world, many countries are closing their borders and instituting travel bans. Airlines have been forced to ground almost their entire fleets, while hotels have seen a rash of cancellations and plunging reservations for upcoming months.

These measures have prompted Booking to withdraw its first-quarter fiscal year 2020 guidance, as the situation is rapidly evolving. The company will provide an update during its first-quarter briefing once it has quantified and assessed the impact from the COVID-19 outbreak.

To add to Booking's problems, the unemployment rate is also soaring in the U.S., with 6.648 million unemployment claims in the week ended March 28. In the week before that, there were 3.3 million claims. The last three weeks of March alone have seen a 3,000% increase in first-time claims for unemployment benefits over early March.

With nearly 10 million Americans losing their jobs in the last two weeks, this will surely crimp consumers' propensity and ability to spend. Many people are not going to be able to afford a vacation anytime soon, which will add further pressure on Booking's financial numbers.

With most of the developed world essentially shutting down to contain the spread of the virus, online travel agencies such as Booking will feel the pain.

CEO Glenn Fogel believes that this will ultimately be a temporary disruption and that travel demand will be back to normal after the virus is contained. However, judging by the high number of unemployed people and the severe damage to many economies around the world, it may be rather optimistic of him to believe that things will get back to normal anytime soon.