Please ensure Javascript is enabled for purposes of website accessibility
Log In Help Join The Motley Fool
Free Article Join Over 1 Million Premium Members And Get More In-Depth Stock Guidance and Research
By John Ballard – Apr 5, 2020 at 10:42AM

As expected, COVID-19 had a severe impact on Nike's (NKE 2.54%) earnings results for the fiscal third quarter (ended Feb. 29). In that report, the virus was only just beginning to spread in the U.S. but had already affected supply chains and store traffic in China.

While Nike reported a worldwide revenue increase of 7% year over year on a currency-neutral basis, the Greater China region posted a decline of 4% year over year. That is a sharp deceleration for a region that had been growing in the double-digits prior to the outbreak.

However, management's comments on the call were full of optimism about the future. That doesn't hide the fact that Nike will likely report ugly results for at least the next quarter or two. Investors want to see signs of the post-pandemic recovery, and management pointed to encouraging trends during the recent earnings call. Here's what they had to say. 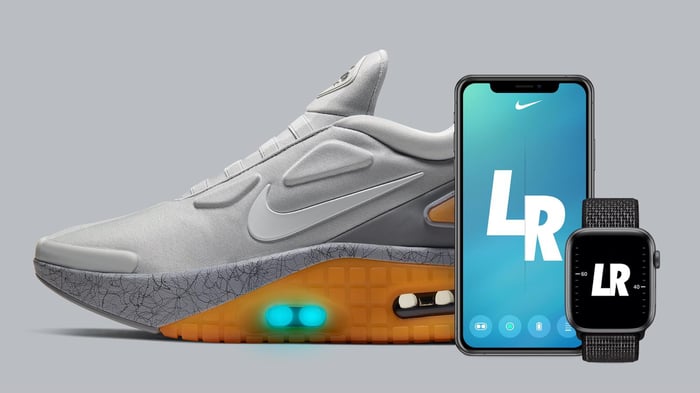 Before the outbreak, China was on track to deliver another quarter of double-digit revenue growth, as Nike's business was continuing to fire on all cylinders around the world. When retail volume began to fall off significantly in China, management moved quickly to divert resources to support its e-commerce channel, where Nike has also been experiencing robust growth. Sign-ups for the Nike Training Club app surged in China, which drove an increase of 80% in weekly active users across all activity apps from the beginning to the end of the quarter.

That spike in engagement crossed over to sales in the e-commerce channel through Nike's commerce app, as CEO John Donahoe discussed on the call. "Our digital business in China grew more than 30% and maintained strong momentum throughout this challenging period," he said.

Repeating the China formula in the U.S.

The bridge in engagement between the workout apps and digital business worked out so well that Nike is repeating that formula in other regions, such as Japan and Korea, which are already seeing improving results.

Nike recently offered a free 90-day trial to its Nike Training Club app for people in the U.S. Along with that offer, it rolled out a new online marketing campaign to get customers in the U.S. and Europe to stay healthy and connected at home.

Investors will have to wait until the fiscal fourth-quarter earnings report to find out if this will be able to boost digital sales in North America, but it should help soften the blow from store closures.

However, most of Nike's revenue is still dependent on brick-and-mortar retail stores, so digital success won't offset all of the weakness from store closures. Over time, though, digital will become more important to Nike. As Donahoe said, "Our apps continue to be the sharp point of our growth, with the Nike app growing revenue close to triple-digits once again in Q3, fueling member acquisition and strong monthly engagement."

Strong brands will get stronger through this crisis

The SARS outbreak in 2003 helped fuel the rapid adoption of e-commerce in China and paved the way for that country to become the world's largest and one of the fastest-growing e-commerce markets in recent years. The COVID-19 outbreak could do for the U.S. what SARS did for China, which is why this is a good time to consider buying shares of retail stocks that are well positioned to capitalize on a potential mass migration to online shopping.

Well-recognized brands with sophisticated shopping apps and lots of resources to invest in marketing and growth, such as Nike, will benefit the most.

As Donahoe said on the call, "Digital remains our fastest-growing channel with owned and partnered digital already representing more than 20% of our overall business." During the last quarter, the digital channel, including sales through the apps and Nike.com, grew 36% year over year on a currency-neutral basis across all geographies. Every geography reported digital growth of more than 30%, and growth was also balanced across categories.

As that performance shows, Nike has one of the best digital shopping experiences of any retailer. The swoosh uses great marketing and a weekly schedule of new sneaker releases that keep people coming back for more.

"We know in times like these that strong brands get even stronger, and I truly believe that no one is better equipped than Nike to navigate the current climate," Donahoe said.