Please ensure Javascript is enabled for purposes of website accessibility
Log In Help Join The Motley Fool
Free Article Join Over 1 Million Premium Members And Get More In-Depth Stock Guidance and Research
By Brian Withers - Apr 6, 2020 at 9:24AM

Zoom’s business is as impressive as its platform.

With millions under stay-at-home orders, many have turned to Zoom Video Communications'(ZM 1.35%) video meeting software for work, class, or even virtual happy hours. Its brand is becoming ubiquitous. It's so widely used in higher education that college students joke that they attend Zoom University, and the digitally native "gen Z" generation quip that they now know what the "Z" stands for.

There's a lot to like about this company. Let's dive in and see why this could be a great buy-and-never-sell stock, and wrap up with a must-not-be-ignored fact for prospective investors.

Zoom's daily usage numbers have seen unprecedented growth from 10 million in December to over 200 million in March. It had been preparing for demand surges with tens of thousands of additional servers readily available to deploy across 17 data centers around the globe. But even founder and CEO Eric Yaun indicated that usage is "far surpassing what we expected" and that "supporting this influx of users has been a tremendous undertaking and our sole focus."

In response to the pandemic, Zoom has made a huge commitment to K-12 education programs by providing its basic service free. The response has been tremendous. Teachers in 90,000 schools across 20 countries are now hosting video meetings for up to 100 participants with no limits on video call time. 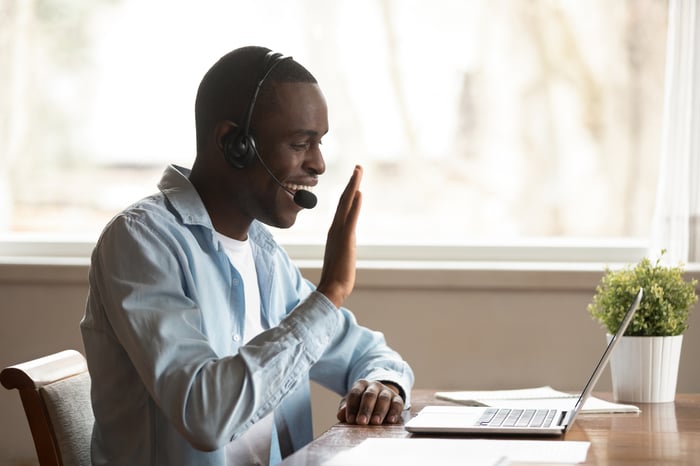 Glassdoor, a third-party data collection platform on companies, reports that 96% of Zoom employees would recommend their employer to a friend, and 98% approve of the job CEO Eric Yuan is doing. Happy employees are productive employees.

4. It's profitable and has a solid balance sheet

Unlike many of its tech company peers, Zoom is profitable, even on a GAAP basis. It posted $25.3 million in net income for full-year 2019, an impressive 4.1% of the top line.

As of January 31, 2020, the company had $855 million in cash and marketable securities and no long-term debt.

The most recent quarter's revenue was up 78% over the previous year. 2019 full-year revenues were up 88%. In its earnings call from early March, management projected 2020 revenues to grow 45% to 47% year-over-year.

Much of its recent growth has been with the free offering, but even if a small percentage of those convert to a paid subscription, it's likely to blow by those numbers.

7. It's investing in the platform

But Zoom is also agile. With the extreme growth in demand, as of April 1 the CEO has frozen all enhancements and moved all of its engineering resources to focus on its "biggest trust, safety, and privacy issues."

CEO Eric Yuan founded the company in 2011 to create a video platform that just works. He has significant skin in the game with 16.5% of outstanding shares as of January 31, 2020. Foolish investors love investing in founder-led companies, as studies have shown that these businesses perform better over the long run.

9. It's got exceptional ability to "land and expand"

Many corporate customers start out with just a few users and then expand usage over time. One large retailer started with a base of 260 users and over a two-year period ramped up to 192,000 licenses, 10,000 phones, and 2,000 meeting rooms. Its sticky platform results in impressive net dollar retention that's exceeded 130% for the last seven quarters.

10. It's got a huge addressable market

A core tenet at the company is to deliver happiness. With millions stuck at home practicing social distancing, many have turned to Zoom to connect with friends and colleagues. Even late-night show host Jimmy Fallon and his band brought smiles to viewers with a Zoom-powered rendition of "Stuck in the Middle" on a recent episode of The Tonight Show.

An important note before you jump in

As with any investment, you shouldn't invest money that you'll need for the next three-to-five years, and you should size your position accordingly to match your risk tolerance. This growth stock has risen roughly 80% since the beginning of the year and has a sky-high bubble-zone price-to-sales ratio of 54. If the company fails to meet heightened expectations, the stock price could take a hit.

If you're interested in being a part of this stock's bright future, buy a small stake now and add to your position over time. You'll be happy you did.