Please ensure Javascript is enabled for purposes of website accessibility
Log In Help Join The Motley Fool
Free Article Join Over 1 Million Premium Members And Get More In-Depth Stock Guidance and Research
By Billy Duberstein - Updated Apr 6, 2020 at 10:36AM

The Chinese coffee chain admitted to inflating its numbers last week. Here are the takeaways.

For investors who had bought into the growth story of Luckin Coffee (LKNC.Y 0.73%), last week was brutal. On April 2, the high-flying growth stock plummeted nearly 80% after the company issued a press release admitting that COO Jian Liu and certain other employees had fabricated a significant amount of sales from the second quarter through the fourth quarter of 2019.

That is bad news for anyone who held Luckin stock prior to the drop. But are there a few valuable (yet expensive) lessons that could be drawn from Luckin's collapse?

You might think that there isn't much to be learned here. After all, how can you judge any stock if its numbers have been manipulated? Still, I think there are several important takeaways from the Luckin debacle that can be used to better manage risk on similar future investments. Here are four of them. 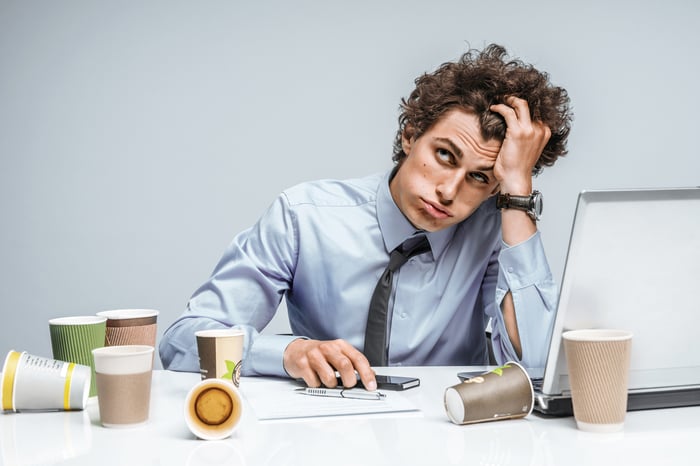 The first main lesson to understand is that, unless you have very intimate knowledge of a proven company with a long history of great results, it's best to stay diversified. That's especially true when investing in expensive growth stocks.

While seasoned active investors may use concentration in a few stocks as a strategy to produce outsize returns, average retail investors should probably diversify their holdings to an extent so that an unforeseen disaster in any one name won't derail an entire portfolio.

2. Be careful with Chinese stocks and other emerging-markets stocks

Notice I didn't say, "Avoid Chinese stocks altogether." However, investors should know that while China is the world's second-largest economy, it is still really an emerging market that is just now finding its way onto the world stage. That means investing in young companies there can be risky, and subject to potential pitfalls such as Luckin's. China's recent economic history is rife with financial frauds, so it's important to use caution when a young, new company makes a name for itself on the Chinese economic scene.

Some investors think that you should avoid Chinese stocks altogether. For instance, short-seller Jim Chanos recently cautioned against investing in Chinese stocks, and has been bearish on China for a long time. But many top investors are bullish on certain China companies. Even Warren Buffett's partner, Charlie Munger, is quite bullish on China in general and several companies in the country in particular.

I am currently invested in a few Chinese stocks, but these tend to be larger companies with established histories and strong management track records. Luckin was a newly public company that had its IPO in May 2019, and even that IPO was less than two years after founding the company. While I'm not saying that you should avoid young Chinese stocks altogether, investors need to exercise caution when a company goes from zero to a $3 billion valuation in less than two years!

3. Be careful with unreal-looking growth numbers

Though young companies often post excitingly high growth numbers, Luckin was a standout even in that respect. Last quarter, it posted revenue growth of 557.6% on store growth of 209.5%.

Those are unreal numbers ... literally, it turns out. But think about those numbers for one second. They suggest that the company was growing comparable-store sales by 166%, even as it was tripling the number of new Luckin Coffee stores.

Usually, when a company opens a large amount of stores in the same area, comps will actually suffer or decelerate, as the new stores absorb some traffic from the old stores. But in order for the above numbers to have been believed, Luckin was more than doubling its sales on a per-store basis, even as it was more than tripling its store count -- no doubt with many new stores within range of older ones.

When legitimate growth companies are posting incredible-sounding growth rates, even if it's not a fraud, it is really, really hard to keep that up for many years. Lots of stocks with white-hot growth have very high valuations, implying that growth may hold up for a long period of time. Often, these stocks are vulnerable to severe pullbacks on any hint of disappointment, even if it's not a fraud.

To be sure, Luckin was so exciting because of its pace of growth and ambition. But the company was not profitable, and constantly raising money in order to fuel its large ambitions. Though it had already raised $561 million in its May IPO, Luckin raised even more money in January 2020, raising some $850 million in convertible notes and American depositary shares.

When looking at a young growth company as a possible investment, be careful of those that consistently need to tap the capital markets in order to grow. While there's nothing wrong with raising money to grow a business, raising large amounts from investors more than once a year could mean the business either can't generate cash internally, or the managers think they're able to raise money at a great price. Generally, that means you shouldn't take the other side of the trade.

It's not possible to see it all

Investing inherently involves risk, and there is no way to avoid all risk in any particular investment. But the Luckin debacle hopefully imparts some of the above lessons when analyzing the next young, disruptive, high-growth company in an emerging market. Therefore, even if you've lost money on Luckin, if you've taken these lessons to heart, it wouldn't have been in vain.