The chip giant got an upgrade from Wall Street and finalized a segment divestiture.

Shares of Intel (INTC) have jumped today, up by 5% as of 11:30 a.m. EDT, after the stock received an upgrade from Wall Street. Chipzilla also reached an agreement to sell its home connectivity unit.

Raymond James analyst Chris Caso boosted his rating on Intel shares from underperform to market perform. The analyst believes that Intel is well positioned to weather the coronavirus pandemic, which may drive demand for laptops as employees work from home. The crisis is also expected to boost sales of data center chips as companies beef up infrastructure to handle the surge of online activity. 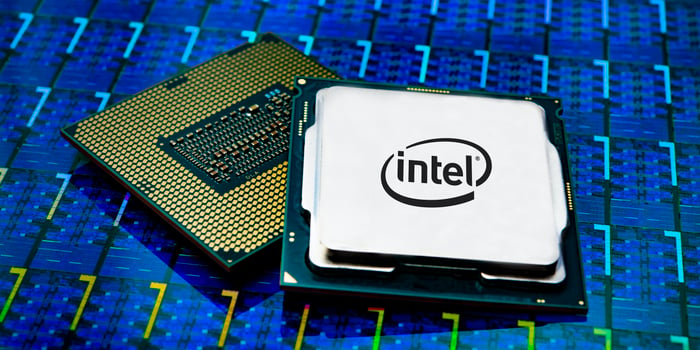 Separately, MaxLinear (MXL) announced that it had agreed to acquire Intel's home gateway platform unit in a $150 million all-cash deal. The sale should boost the company's quarterly revenue by $60 million to $70 million and is expected to become accretive to MaxLinear's adjusted earnings in the first full quarter after it closes in Q3.

The tech giant had reportedly started looking for buyers of that segment late last year, and rumors surfaced in February that MaxLinear was a potential buyer. That unit makes chips for home internet devices like routers and Wi-Fi access points and is estimated to generate annual revenue of approximately $450 million.

While end markets that Intel serves may experience a short-term boost from the outbreak's fallout, Caso notes that Intel faces "longer-term structural issues," most notably its "process technology disadvantage" that is expected to persist into 2022. These concerns prevent Raymond James from "becoming more constructive on the stock."