Please ensure Javascript is enabled for purposes of website accessibility
Log In Help Join The Motley Fool
Free Article Join Over 1 Million Premium Members And Get More In-Depth Stock Guidance and Research
By Will Healy – Apr 7, 2020 at 8:40AM

A lower share price bolsters the case for the consumer robotics company.

iRobot (IRBT -0.02%) is best known for consumer robots, such as the Roomba vacuum cleaner and the Braava floor mopper. It has sold over 30 million units since its founding, and its growing revenue is a testament to the popularity of its products.

However, the company has faced challenges over the last year which have little to do with COVID-19. Rising competition forced the company to cut prices. At the same time, tariff increases on products coming from China have further reduced profits. Despite the problems facing this tech stock, investors may have a case for buying iRobot at current levels.

iRobot's struggles came to a head in early 2019. Competitors such as SharkNinja, Ecovacs Robotics, and Neato Robotics emerged, taking market share. The company subsequently responded with price cuts, and CEO Colin Angle stated during an investor call that he expected competition to affect 2020 revenue and profits.

The company has also dealt with import duties on robotic products manufactured in China. This took the tariff to 25%, up from the previous 10%. Even with rising revenue, earnings in the latest quarter fell to $0.70 per share, down from $0.88 per share for the year-ago quarter.

This has weighed on iRobot stock. Since hitting a high of $132.30 per share in April 2019, the stock has seen a steady decline. Now, with the additional COVID-19-inspired selling, the stock has fallen as low as $32.79 per share. Even at about $42 per share, where it trades at the time of this writing, that represents a drop of almost 70%. 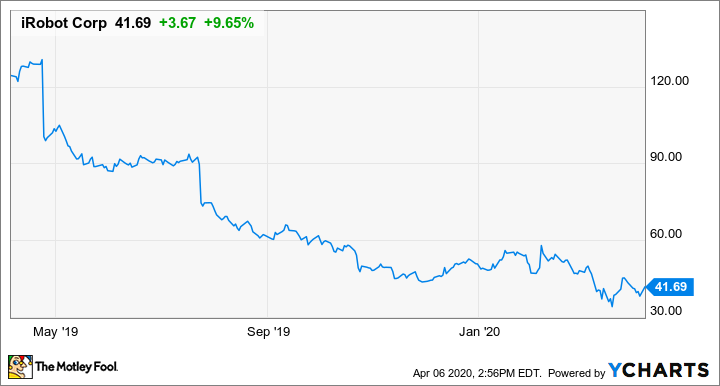 A lower stock price could change the investment case for iRobot

However, that level of decline indicates investors have priced falling profits into the stock. Analysts expect earnings to decline approximately 70% in fiscal 2020, which corresponds to the decline in the stock price. Management has also withdrawn its fiscal 2020 guidance due to the COVID-19 pandemic.

But these lower profit levels appear temporary as the company has now ended its market share slide. Management expects a rebound in 2021, and analysts estimate earnings will more than double that year. Over the next five years, earnings should still grow at a double-digit pace.

Moreover, the stock's valuation has come down significantly. The trailing P/E ratio, which stood at over 40 times at iRobot's peak, has fallen to just 14 today. That's the lowest level for the stock in the last 10 years.

Furthermore, iRobot has made moves that should mitigate the impact of import duties. They have opened a production facility in Malaysia, a country not affected by tariffs on Chinese goods. The company admitted that these tariffs were a factor in diversifying production away from China, where it has manufactured robots since 2010. 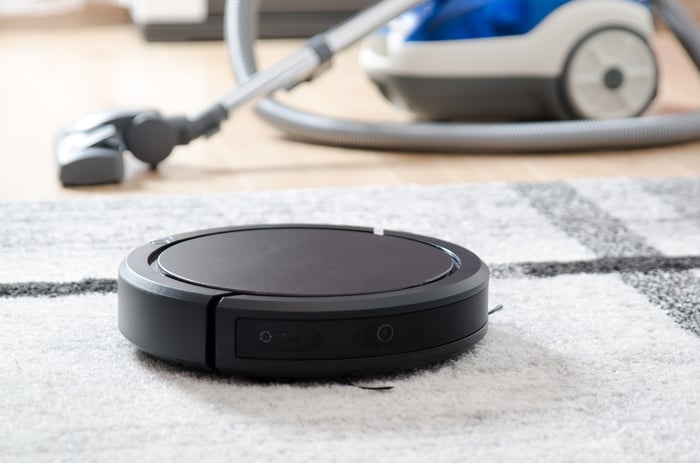 iRobot also continues to fight back against competitors in the courtroom. The company has sued peers such as SharkNinja and Hoover, now a division of China-based Techtronic Industries. iRobot holds over 1,400 patents and has moved aggressively to stop competitors from infringing on its creations. While the company cannot totally avoid competition, these lawsuits could at least widen its moat.

Innovation could also enhance its edge. The company announced a partnership with IFTTT (If This Then That integration service) that would tie iRobot products to smart home devices. This would make their products part of an ecosystem likely to become increasingly common in homes.

Moreover, while speaking at CES in January, Angle hinted at the development of a robotic butler. The company developed robotic arms before it sold its defense and security segment in 2016. However, it can still offer technology that could bring more robots into the home in the near future.

Competitive and political challenges have combined with coronavirus uncertainty to pummel iRobot over the last year. With reduced tariff exposure, attractive pricing, and better patent protection, improved revenue and earnings should boost the stock long term. Trading at a massive discount from its 52-week high, investors can benefit by buying in the current environment.