Please ensure Javascript is enabled for purposes of website accessibility
Log In Help Join The Motley Fool
Free Article Join Over 1 Million Premium Members And Get More In-Depth Stock Guidance and Research
By Bram Berkowitz – Apr 8, 2020 at 7:55AM

The bank has had tremendous success over the last decade and shown its credit quality can withstand tough times.

Since mid-February, stock for SVB Financial Group (SIVB 0.65%) -- the holding company for Silicon Valley Bank -- has gone from trading around roughly $270 per share in mid-February to now hovering around $160 per share, eroding nearly 41% of shareholder value. It's not exactly a surprise considering that most of the broader stock market has taken a hit from efforts to stop the spread of the coronavirus pandemic.

The banking sector has been hit particularly hard. The Nasdaq Bank Index, which is comprised of small and larger regional banks, has declined by roughly 37% over the same timeframe, and the KBW Bank index, a group of the largest banks in the country, has seen a 38.7% decline.

Unlike most traditional banks, SVB Financial is a niche player that focuses heavily on working with companies in the startup and tech sectors. The company, which holds $71 billion in assets, has four main divisions: a global commercial bank, a venture capital investment arm, a private banking practice, and an investment bank operation focused on life science and healthcare.

Given the current economic situation, this bank faces some tough quarters ahead, primarily because of the riskier asset class it operates in. But you should expect SVB Financial, which has had tremendous success over the past decade, to weather this storm and bounce back to its previous levels. Here's why. 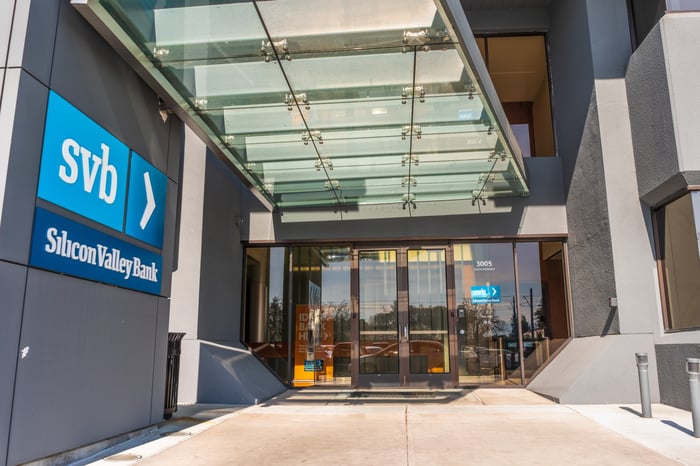 The banking company's stock price has taken a bigger hit than the banking sector overall because it focuses much of its efforts on providing capital to higher-risk segments such as startups, venture capital (VC), and private equity (PE) firms. Over half of SVB Financial's $33 billion loan portfolio consists of loans to private equity and venture capital firms. Most of these loans are capital call lines of credit that provide bridge financing for clients that need to quickly execute on investments. The loans are paid back in short order once the firms obtain the capital committed to them from limited partners. That means the bank's performance is significantly tied to the health of private markets.

As a result of the coronavirus pandemic, the PE and VC markets are slowing, likely for two reasons. First, the limited partners and investors that fund these firms may want to put their money into less risky investments during a downturn. Second, VC and PE firms are going to be pickier about what they invest in going forward, which could slow investing in general and therefore the demand for call lines of credit. PE and VC firms that might be potential clients also face deteriorating credit quality in their own portfolios because startups with little cash flow can be heavily impacted by a slight disruption in revenues. Various media reports indicate significant job cuts among startups in March. Struggling portfolio companies will likely hurt returns, and force PE and VC firms to either drop investments and take a loss or double down on riskier companies to keep them alive until things return to normal.

PE and VC firms may be OK

A recent note from Morningstar analytics firm PitchBook says that returns in the private markets are less volatile than those in public markets in troubled times. Since 2001, PE firms trailed public markets in 24 of the 28 quarters where the S&P 500 total return hit 5% or higher. But when the S&P 500 has been in the red, PE firm funds consistently outperformed the broader market in every quarter since 2001.

Current market conditions could even provide some benefits for both PE and VC firms. For instance, as capital dries up, not only do PE and VC firms have more power to selectively choose which companies they invest in; they are more likely able to invest at lower valuations because there is less available capital. These industries may also end up getting some relief by qualifying for stimulus loans related to the U.S. government's response to the COVID-19 pandemic. The last thing to consider is that a lot of the investments and loans SVB Financial has made are in industries that could do well right now, such as life science and healthcare, as well as in tech companies that help people and businesses operate during this time of social distancing.

This holding company has had one of the most successful decades in the banking industry in terms of its profitability metrics and return on shareholder value. SVB Financial's stock was trading around $45 a share in mid-January 2010 and a decade later was trading at $256 a share, representing a price appreciation of 469%. In 2019, SVB Financial delivered a 1.9% return on assets (ROA shows how well a company uses its assets to generate earnings where higher is better; 1.3% is the current average for the banking industry), and nearly a 20% return on equity (a measure of how much value a company is providing to its shareholders where higher percentages are better; 11.4% is the current average for the banking industry). SVB's efficiency ratio, a measure of a bank's expenses as a percentage of revenue, is also superb at just under 50% over the past two years.

While there may be some concern about the riskier industries SVB Financial serves, the bank has shown it can hold its own on credit quality. In the midst of the Great Recession right around when credit deterioration peaked in the third quarter of 2009, SVB Financial's ratio of non-performing loans to total loans was 1.6%, according to the FDIC. All other banks in the U.S. between $10 billion and $250 billion in assets had an average ratio of 4.5% at that time. Net charge-offs (debt unlikely to ever be recovered) at SVB Financial as a percentage of total loans was 2.5% in 2009, compared to 3.1% for banks between $10 billion and $250 billion in assets.

SVB Financial is also a very liquid bank. Its loan portfolio is only $33 billion, while it has gathered roughly $61 billion in deposits, giving it a loan-to-deposit ratio of 54%, which is very small compared to other banks. It holds more than $29 billion of its assets in its investment securities portfolio, which is largely comprised of less risky and more liquid U.S. Treasury bills and mortgage-backed securities.

A banking stock with potential

Like most of the general market and banking sector, SVB Financial has seen a huge depreciation in its stock price as of late. And there could be some hard upcoming quarters if the PE and VC firms continue to struggle. But considering that the bank had absolutely stellar performance over the last decade, and did demonstrate its ability to maintain credit quality during the Great Recession, I still like the stock and see no reason why it can't return to the price it was trading at before the coronavirus pandemic took the economy into turmoil.