Please ensure Javascript is enabled for purposes of website accessibility
Log In Help Join The Motley Fool
Free Article Join Over 1 Million Premium Members And Get More In-Depth Stock Guidance and Research
By Daniel B. Kline - Updated Apr 10, 2020 at 10:57AM

The company has been raising cash in order to stay afloat.

The world's largest cruise line, Carnival (CCL -6.49%) accounts for roughly half of all cruises across the entire world. At the moment, the company's fleet of over 100 ships remains docked, with no clear timetable for when sailings will begin (though the company does say it will restart some U.S. operations in mid-May).

Of course, any date is little more than wishful thinking for now. It's also nearly impossible to predict when customers will feel comfortable cruising, when the company will be able to resume its full schedule, and when some ports will re-open to cruise ships.

As you might imagine, this has created a cash crunch for Carnival, causing its shares to drop by roughly 80%. It costs about $1 billion a month to operate the cruise line, which has led the company to sell 71,875,000 shares of common stock at $8 per share (well below its 52-week high of $56.04), a move which may have opened the door for some large investors -- including Saudi Arabia's Public investment Fund, which now holds an 8.2% stake in the cruise line. 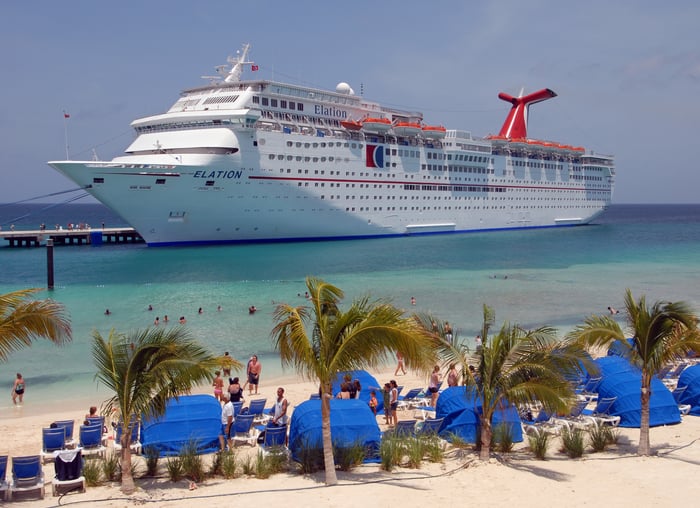 All of Carnival's ship are currently docked. Image source: Carnival.

What is the Public Investing Fund?

Basically, the Public Investing Fund (PIF) makes investments on behalf of the Kingdom of Saudi Arabia. The country is using its resources to diversify and buy stakes in a range of businesses, which it explains on the PIF website.

The Public Investment Fund is seeking to become a leading global impactful investor in line with the objective of Vision 2030 and to drive the economic transformation of Saudi Arabia, through active long- term investments and maintaining high standards of governance and transparency. The Public Investment Fund is developing a portfolio of high quality domestic and international investme​nts, diversified across sectors, geographies and asset classes. Working alongside global strategic partners and renowned investment managers, PIF acts as the Kingdom's main investment arm to deliver a strategy focused on achieving attractive financial returns and long-term value for the Kingdom of Saudi Arabia.

That's a pretty long way to say that Saudi Arabia has money (or at least its royal family does) and that it's spending that cash on a broad range of companies both public and private. PIF invests both domestically and abroad, and has already taken stakes in Uber and Tesla.

Is this good for Carnival?

Carnival has raised a significant amount of cash, including $4 billion in financing at a staggering 11.5% interest rate. Having a deep-pocketed entity take a major stake in the cruise line could be a positive.

PIF now has a vested interest in the cruise line not going bankrupt. In a bankruptcy, shareholders generally fare poorly. There's essentially an order to how people get paid, and debt-holders tend to be at the front of the line.

Carnival may not need more money, but PIF could loan it cash or buy more shares directly from the company if money gets tight. What it would want in exchange for bankrolling the company (board seats, a say over management, etc.) may be more than the company wants to pay, but Carnival may not have a choice at some point.

For Carnival shareholders, it's hard not to see this investment as a positive. When you're strapped for cash (or could be), having a deep-pocketed friend that has a vested interest in your survival is probably a good thing.