Please ensure Javascript is enabled for purposes of website accessibility
Log In Help Join The Motley Fool
Free Article Join Over 1 Million Premium Members And Get More In-Depth Stock Guidance and Research
By Will Ebiefung - Apr 8, 2020 at 10:42AM

The Macau-based casino operator is in trouble after brutal new travel restrictions from mainland China.

The coronavirus pandemic has now infected over one million people around the world with new hotspots developing in the United States and Europe. While China, the original epicenter of the disease, is slowly getting back to normal, its hard-hit gambling industry may feel the pain for months -- if not years -- to come.

Melco Resorts & Entertainment (MLCO 0.76%) is a casino operator with a huge presence in Asia. The company has four properties in Macau and one property in Manila, Philippines.

The stock has underperformed the market with a 47% decline year-to-date compared to a 16% decline in the S&P 500. Melco is set to continue underperforming the market as mainland China imposes strict travel measures -- this time including visitors entering its borders from special administrative regions like Macau and Hong Kong. 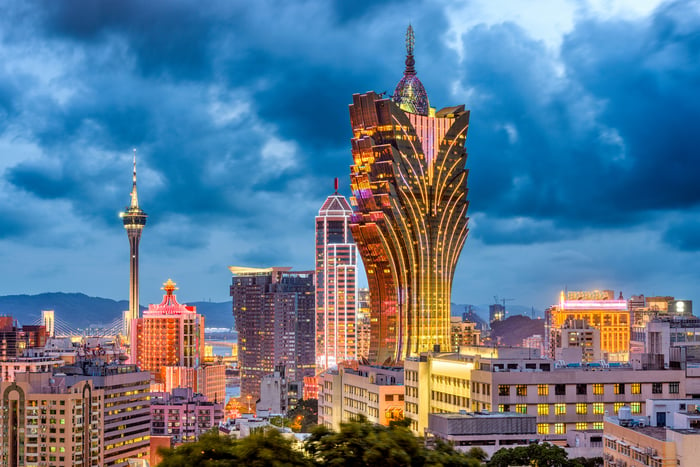 Macau, a special administrative region of China, became the gambling capital of the world after taking the title from Las Vegas in 2007. It is the only area in China where gambling is legal, so it enjoys a virtual monopoly on the country's vast domestic market.

In good times, the resort city was a cash cow, generating a staggering $36.5 billion in gambling revenue in 2019. But by January of 2020, cracks were already forming as a new coronavirus ripped through mainland China. By February, the industry collapsed as Chinese authorities introduced sweeping internal travel restrictions to contain the new pandemic.

According to analysts at JP Morgan, Macau's gambling revenue could fall to near zero in April. This is because Guangzhou province, the only Chinese province with a land border with Macau, has imposed additional restrictions on travelers entering and exiting its territory. Now, all visitors from outside mainland China (including Hong Kong and Macau) will face a 14-day quarantine upon reentering the province. This means Chinese gamblers who visit Macau will be quarantined when they return home, a death knell for tourism.

Melco Resorts is also unlikely to generate much revenue from its City of Dreams resort in the Philippines due to that nation's decision to close all gambling venues until at least April 14 to slow the coronavirus pandemic.

A business with zero revenue?

Melco Resorts generated $5.74 billion in revenue in 2019 -- a 12% jump from the $5.12 billion generated in 2018. The company's strong 2019 result was largely driven by the 17% growth in mass table revenue in Macau -- "mass table" is a term that refers to everyday gamblers who are distinct from the highly lucrative VIP market. But because the mass table market depends on huge volumes of small spenders, it will be heavily affected by the new travel restrictions imposed by mainland China.

At $12 per share, Melco Resorts has a market cap of around $5 billion according to the latest data. This means the company is currently trading below 2019 revenue ($5.74 billion). This is a low valuation, but it could go lower considering Melco may barely generate any revenue in the first half of 2020 --- or longer depending on how long coronavirus remains a threat.

With Macau casino losses estimated to be between $1.5 million to $4 million a day, Melco Resorts could find itself burning through much of its $1.39 billion cash pile if the slowdown lasts for the rest of the year. The cash will burn even faster if management decides to maintain its $0.66 annual dividend, a payout that totaled $301 million in 2019. Melco has over $4.39 billion in long-term debt, so its balance sheet is rapidly deteriorating.

Casinos have a very lucrative business model, but it's also very risky. Melco Resorts has seen its gaming revenue collapse in the first quarter. And it looks like the pain will continue in the second quarter or longer due to new travel restrictions in mainland China.

Melco Resorts' balance sheet is rapidly deteriorating in the face of what could be a global recession, and that's not an enviable position. Despite its ultra-low top-line valuation, the stock still has room to fall in 2020.