Please ensure Javascript is enabled for purposes of website accessibility
Log In Help Join The Motley Fool
Free Article Join Over 1 Million Premium Members And Get More In-Depth Stock Guidance and Research
By Adria Cimino - Apr 10, 2020 at 6:13AM

Its newly approved cystic fibrosis treatment, Trikafta, has what it takes to drive revenue growth.

Vertex Pharmaceuticals (VRTX -1.22%), a leader in the treatment of cystic fibrosis, has expanded its annual revenue over the past five years, and its latest approved drug likely will help it keep that trend going. In October, the U.S. Food and Drug Administration (FDA) gave the nod to Trikafta, a combination medication with the potential to be prescribed to 90% of people with cystic fibrosis.

In addition, Vertex's pipeline includes potential treatments for pain, sickle cell disease, and the blood disorder beta-thalassemia, but those studies are all still in Phases 1 and 2. Therefore, Vertex's position a year from now will still depend on how its cystic fibrosis treatments are faring. 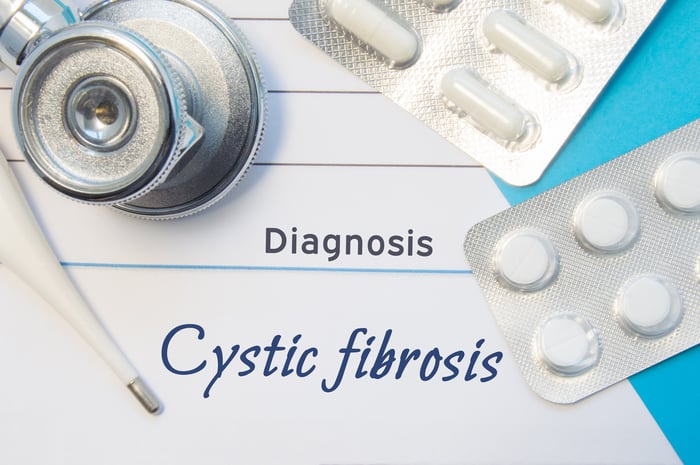 Cystic fibrosis is a progressive genetic disease that affects various organs, but it's most known for its effect on the lungs. The disease is caused by mutations in the cystic fibrosis transmembrane conductance regulator (CFTR) gene that result in a defective or missing CFTR protein. The absence or faulty functioning of this protein leads to poor flow of salt and water through the cells of various organs.

The FDA approved Trikafta -- a combination treatment composed of elexacaftor, tezacaftor, and ivacaftor -- to treat the underlying cause of the disease in patients 12 and older who have at least one F508del mutation, the most common mutation in those with cystic fibrosis.

Vertex has submitted Trikafta to the European Medicines Agency for the same indication, and a decision from that regulator is likely to come this year. If favorable, its sales in the EU will surely boost the drug's revenue next year. The company is currently evaluating the treatment in a phase 3 study of 6- to 11-year-olds, with plans to launch studies with younger children.

Morningstar predicts sales of its cystic fibrosis drugs will hit $5.3 billion this year, led by Trikafta and Symdeko, which was approved two years ago. Symdeko is a combination of tezacaftor and ivacaftor and is approved for patients 6 and older. Some mutations cause the CFTR protein to fold abnormally, preventing it from reaching the cell surface -- Symdeko addresses this problem.

Vertex said in its fourth-quarter earnings call that Trikafta, in its first quarter on the market, became the company's top-selling product, generating $420 million. About 18,000 U.S. patients are eligible for the combination drug, which is the largest patient population at approval and launch the company has ever had for a cystic fibrosis drug. Vertex said it expects Trikafta to drive revenue growth this year. With the drug still in its early days on the market and the possibility of European Union approval on the horizon, I think it's reasonable to predict Trikafta may continue to drive growth in 2021 as well.

Since we're talking about Vertex's situation a year from now, it's important to factor in the conditions that are weighing on most companies and stocks today. The coronavirus pandemic has resulted in manufacturing and other disruptions for many companies. However, Vertex said recently that the pandemic hasn't impacted its supply chain or its business outlook for the year. The company did say it may pause enrollment in certain clinical studies or delay the start of new ones, given that many hospitals, which serve as trial sites, are overwhelmed with coronavirus patients. Such interruptions might lengthen the timelines for those particular programs, but delays of a few weeks or even months won't change the long-term drug approval or revenue picture for the company.

Shares at a record high

Vertex started the year with $3.8 billion in cash, cash equivalents, and marketable securities, its highest  level ever. Shares are trading at a record high after gaining 13% year to date, during a period when the S&P 500 is down 18%. Can Vertex shares move even higher? Over the long term, that is very likely, because investors will appreciate this biotech company's bright revenue picture. With Trikafta in its early days and Symdeko delivering ongoing growth, I expect that a year from now, Vertex's revenue and earnings will have continued to climb.