A shifting product focus and hefty dividend are motivating investors.

Besides working on a vaccine for the coronavirus, British American Tobacco (BTI 1.78%) is one of the top three tobacco companies in the world, alongside Altria Group and Philip Morris International.

Yes, the coronavirus vaccine attempt is real. On April 5, the company announced research on a potential vaccine that can be produced using lab-grown plants closely related to tobacco. British American Tobacco said that its potential vaccine is now being tested on animals through its subsidiary, Kentucky BioProcessing. If clinical trials are approved, the company hopes to produce up to 3 million doses of the vaccine per week beginning in June.

British American Tobacco says elements in the tobacco plant have been used in other vaccine developments, specifically for Ebola. It's an unexpected attempt from a tobacco company.

Now, let's talk about the two business segments that make up the majority of British American Tobacco's products.

The first segment is combustibles (cigarettes). Brands owned by British American include Newport, Pall Mall, Dunhill, Lucky Strike, Kent, and others. The company's exposure to the lucrative American market increased in 2017, when it purchased the remaining 58% of Reynolds American that it did not already own, bringing several popular brands into the portfolio.

The second segment is noncombustibles, which includes electronic cigarettes, a heat-not-burn device, and oral nicotine pouches. As consumers transition away from traditional cigarettes, this business segment is expected to lead growth. 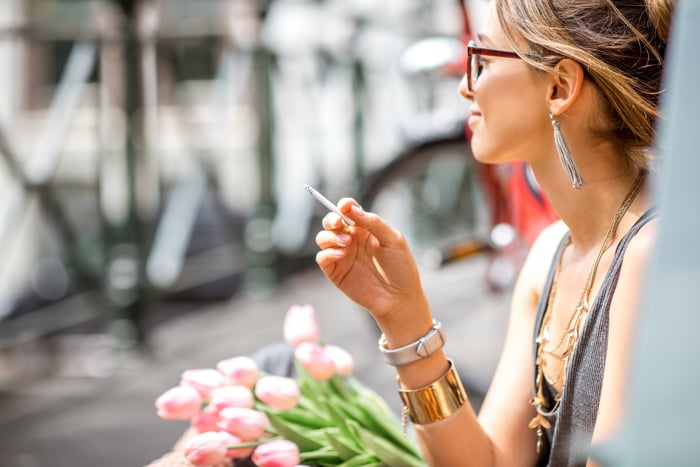 All of these products are sold globally, with about 40% of revenue coming from the U.S. and 60% from outside the U.S. With such a widespread market, British American has minimized currency risk.

The global reach of British American is also a significant advantage because it spreads regulatory risk. Altria and Philip Morris have more localized markets and can't spread regulatory risk globally. This was a particular issue when the Food and Drug Administration banned flavored vaping in the U.S., taking specific aim at Juul, in which Altria had invested almost $13 billion. While Juul was under fire, British American picked up market share with its Vuse e-cigarette.

In March 2020, CEO Jack Bowles unveiled British American Tobacco's evolved strategy in response to changes in the market. He defined the corporate purpose as "reducing the health impact of our business through offering a greater choice of enjoyable and less risky products for our consumers." According to Bowles, the company intends to deliver sustainable and superior returns for shareholders by focusing on its noncombustibles, with investments funded by the traditional tobacco business.

British American currently offers a superior dividend yield of 7.2%. The company has increased its dividends every year for more than 20 years.

Investors want to know: Is it time to buy?

With approximately 1.1 billion smokers in the world, there is a huge potential market for conversion to noncombustible products. British American Tobacco's e-cigarette brands are already leaders in the United Kingdom, and Vuse's U.S. market share increased in the wake of Juul's troubles with the FDA.

The company reported 2019 revenue in new categories (noncombustibles) of $1.5 billion: up 37% year over year, and more than double its comparable revenue from that segment in 2017. The combination of next-generation products and the existing brand power of its legacy products sets up solid future growth.

Amid the coronavirus market meltdown, the share price of British American Tobacco's American depositary shares has fallen 11.5% year to date. Yet demand may be increasing, given all the downtime people are experiencing due to COVID-19 restrictions and closed businesses.

The trailing price-to-earnings ratio for British American Tobacco is 11.8, lower than the industry average of 14.2, indicating undervaluation.

Considering the low P/E, superior dividend return, new-product focus (complemented by still-profitable legacy products), risk profile, and depressed share price, I think British American Tobacco is a solid buy. And if the company helps find a vaccine for the coronavirus, well, that would be the cherry on top.