The Happiest Place on Earth will stay empty and silent until the coronavirus crisis has passed, and thousands of workers will apply for unemployment assistance.

The Walt Disney Company (DIS 2.21%) reached a deal with some of its largest workers' unions on Saturday, allowing the company to furlough another 43,000 Disney World employees from April 19 to the reopening of its theme parks.

What Disney World's workers are getting

The announcement was made by a coalition of six Disney unions, collectively known as Unite Here Central Florida, in the form of a live video stream. Union leader Eric Clinton called the agreement an "exciting victory" and "one of the best in the nation."

Under this deal, Disney will furlough 43,000 theme park workers on April 19. Workers will immediately become eligible for unemployment benefits from the State of Florida along with 12 months of full healthcare coverage at no cost to the employee. They will also continue to collect hours of credit toward pension eligibility and next year's healthcare benefits as if they had continued their ordinary work schedule. 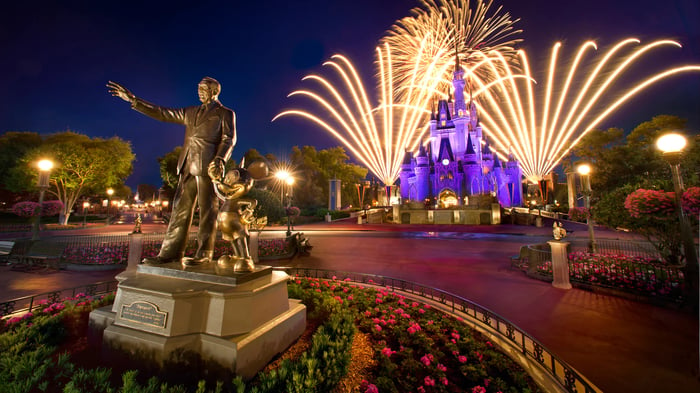 Analyst firm JPMorgan Chase had suggested that Disney could save approximately $500 million by furloughing most of its theme park employees during the COVID-19 crisis, but the company provided full salaries to its full-time employees until April 18. Temporary workers and third-party staff were furloughed or let go in mid-March, and Disney's executives are taking sizable pay cuts during the coronavirus park closures and movie-production halts.

The Orlando Sentinel newspaper estimates that this action alone will nearly triple the unemployment rate in metro Orlando from 2.9% to 8.5%, reflecting the House of Mouse's outsize role in the local economy. The agreement is similar to a deal Disney struck with 10 Californian unions on Friday, furloughing another 28,000 Disneyland employees on April 19.