Please ensure Javascript is enabled for purposes of website accessibility
Log In Help Join The Motley Fool
Free Article Join Over 1 Million Premium Members And Get More In-Depth Stock Guidance and Research
By Keith Speights – Apr 11, 2020 at 7:34AM

The company's liquid biopsy products could change the landscape for cancer diagnosis and treatment.

When a company develops products that should be game changers in the way cancer is treated, it's going to generate a lot of buzz. That's exactly what has happened for Guardant Health (GH -6.73%).

Helmy Eltoukhy and AmirAli Talasaz founded Guardant Health in 2013 after both men served in various research positions at genomic sequencing pioneer Illumina. They set out to "conquer cancer" by tapping into the molecular information in tumor cells throughout all stages of cancer. And they've been successful so far. 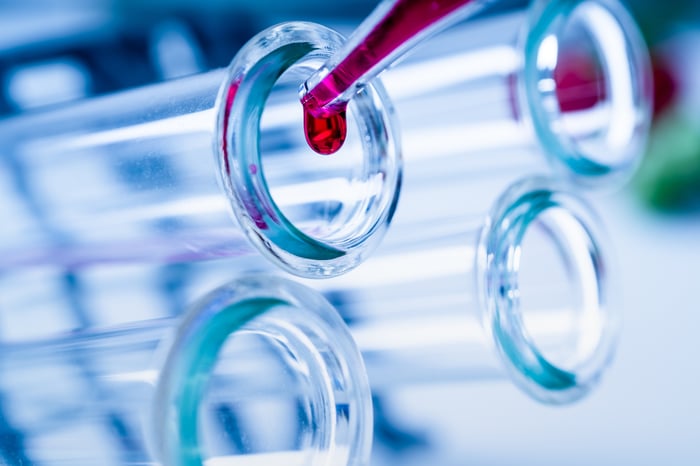 The rise of liquid biopsy

Scientists have long hoped to have a way to diagnose cancer without having to obtain tissue samples. With the rise of cancer immunotherapies that harness the body's immune system to fight cancer cells, biotechs and pharmaceutical companies have sought out approaches to improve the development of their drugs. And oncologists have wanted tests to select the most appropriate immunotherapy for a given patient.

These objectives can be met using liquid biopsy. Tissue biopsy typically involves a surgical procedure. Liquid biopsy, though, only requires a blood sample to be drawn. The blood is then analyzed to detect fragments of DNA that have broken off from tumor cells.

These two liquid biopsy products have turned Guardant Health into a high-flying growth stock. Shares have more than doubled since the company's initial public offering in 2018 and were up much more than that prior to the coronavirus-fueled market meltdown this year.

Guardant360 and GuardantOMNI have also generated tremendous sales so far. In the fourth quarter of 2019, Guardant Health's revenue soared 91% year over year to $62.9 million, blowing past Wall Street analysts' estimates.

Guardant Health has only scratched the surface of the potential for its current products, especially Guardant360. The company estimates that the liquid biopsy test has a $6 billion addressable market in the U.S. Is that projection realistic? I think so.

The company has a strong case to make for the advantages offered by Guardant360. For example, clinical studies demonstrated that the liquid biopsy can detect biomarkers for NSCLC in more patients than standard tissue biopsies can and do so much more quickly.

But Guardant Health has an even bigger opportunity with a couple of liquid biopsy tests that are currently available only for research use. LUNAR-1 targets recurrence detection in cancer survivors, as well as helping drugmakers identify new drug development opportunities in adjuvant and early-stage cancer settings. LUNAR-2 targets the detection of early-stage cancer.

My view is that the buzz for Guardant Health will intensify over the next few years. It continues to win greater reimbursement coverage for Guardant360 across all cancer types. The company is moving forward with its clinical study evaluating LUNAR-1 for helping select which patients with stage 2 colon cancer could potentially benefit from adjuvant chemotherapy.

The stock has fallen significantly due to the market sell-off resulting from the COVID-19 outbreak. While it's possible that Guardant Health's sales could decline as a result of the pandemic, I think the impact will be a relatively small one and will only be temporary. This presents a great opportunity for investors who want to reap tremendous long-term gains to do more than just talk and scoop up shares of this innovative company.