Please ensure Javascript is enabled for purposes of website accessibility
Log In Help Join The Motley Fool
Free Article Join Over 1 Million Premium Members And Get More In-Depth Stock Guidance and Research
By Billy Duberstein – Apr 13, 2020 at 10:16AM

Three different semiconductor bellweathers reported booming sales recently, but not everyone is celebrating.

If you'd like to gauge the health of the technology market, there are a few large semiconductor companies that act as bellweathers for the industry. Three of the biggest and broadest are Intel (INTC -2.31%), Taiwan Semiconductor Manufacturing (TSM -1.04%), and Microchip Technology (MCHP -1.55%).

Microchip serves a broad array of industries with its analog chips and microcontrollers. Intel's processors are heavily concentrated in both PCs and data centers. Taiwan Semiconductor makes a broad array of chips for designers that don't own their own fabs, with particular emphasis on mobile phone modems, high-performance computing chips, and graphics chips.

By observing these three companies, investors can get a sense of how chips are selling overall. That has implications for all kinds of technology companies, from the chip producers themselves, to the software and cloud companies that are their buyers.

And even though a severe economic slowdown is upon us, each of the above companies reported a recent boom in sales. Could the stay-at-home economy actually be benefiting this industry, as others collapse? 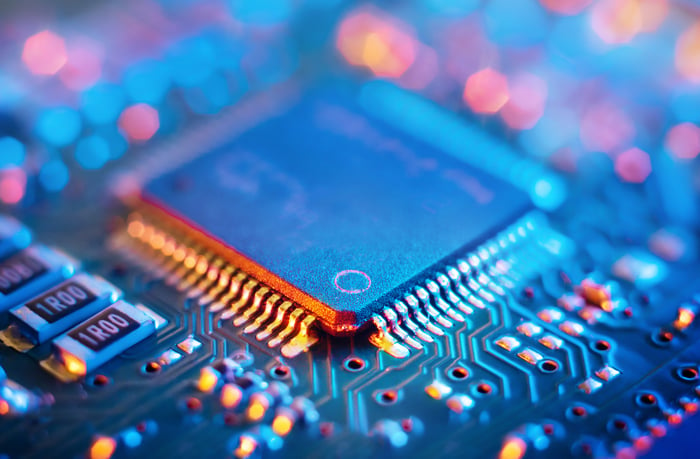 Last week, Intel CEO Bob Swan said in an interview with Bloomberg that Intel had seen an increase in demand for its processors during the first quarter, and that the company was still meeting 90% of its orders despite some coronavirus-related disruption to its supply chain. Intel still has a dominant market share in processors worldwide, including for laptops, desktops, and data centers. The current need for remote work and education is spurring demand for high-speed laptops, and it's also taxing the capacity of data centers, which have needed to add more and more processors to keep up with the demand.

Meanwhile, Taiwan Semiconductor recently reported a big surge in March sales numbers, which rocketed higher by 42% over the prior year and 21.5% over February. It should be noted that Taiwan Semi was already seeing very strong year-over-year growth even back in January, growing 32% over 2019. That was due to last year's semiconductor recession, caused by the U.S.-China trade war, which later improved with the onset of 5G adoption, which requires lots of leading-edge chips, an area where Taiwan Semi has leapfrogged ahead of the competition.

Finally, Microchip just pre-announced its first-quarter sales results, with a positive surprise over the outlook it gave just one month ago. The company is now saying its sales grew 3% month over month in March, as opposed to the flat sequential growth it had predicted earlier in the month.

However, the most interesting number Microchip gave was its backlog for the June quarter, which is now 9% higher than it was at this time during the March quarter.

Could all of these results mean semiconductors are seeing accelerating growth?

Given the uncertainty in the economy, these companies aren't exactly celebrating. In fact, Microchip management clearly doesn't believe in its own sales growth, saying in a press release: "Microchip ... believes that the strength in bookings may be a result of customer concerns about supply chain disruptions due to the COVID-19 virus. With economies around the world contracting rapidly, with millions of people getting laid off and with customer factory closures due to 'shelter in place' ordinances in various countries, we believe that product demand is likely to weaken significantly."

As a consequence, CEO Steve Sanghi, other top managers, and Microchip directors are taking 20% pay cuts immediately. Non-factory workers will take a 10% salary cut, and factory workers have been asked to take rotating time off. Microchip will also be lowering its capital expenditures to between $50 million and $70 million.

Meanwhile, while Intel is currently reporting increased demand, it suspended its share repurchase program on March 24. Intel described the share repurchase suspension as "conservative," but the very next day, the company tapped the debt markets, raising $8 billion in senior notes with maturities between 2025 and 2060.

TSMC hasn't given an outlook beyond its current reported numbers.

Two leading technology firms, IDC and Gartner (IT -0.71%), both have some different predictions for the semiconductor market in 2020. Prior to the COVID-19 updates, IDC predicted 2% growth and Gartner had predicted a much more robust 12.5% growth in 2020. Now, IDC is predicting a 3% to 6% decline in semi revenues, with Gartner only predicting a 0.9% decrease.

In order to get to those numbers, things will have to fall off in a big way in the second half of the year from these solid first-half numbers. Certainly, there has been a near-term rush to buy chips, for fear of supply disruptions later in the year. That could mean the buying dries up later, especially if demand goes down and customers are sitting on lots of inventory.

Still, there's likely to be a big difference in chip growth in 2020, depending on the technology application.

Assuming we will have to continue social distancing measures for the next few months or quarters, I can see data center chips holding up, especially for memory, storage, and processing power. Video game graphics chips, memory, and semi-custom chips for video consoles could also get a boost, as people play more video games at home, and with the new Xbox and PlayStation consoles scheduled for release this winter.

However, mobile phone, industrial, and automotive applications, all of which are levered to consumer buying and economic growth, are likely to take big hits. That could be why Microchip is the most pessimistic. It has much broader exposure to industrial, automotive, and consumer appliances than the other two companies above.

Thus, I think technology investors need to pick their spots and focus on chip stocks with exposure to data centers, gaming, and perhaps laptops going forward in 2020. The more broad chipmakers with exposure to industrial and automotive segments, like Microchip, are likely to have much weaker sales in the second half.