The market is rallying on coronavirus optimism as the Mac maker unveils a new tool to help containment efforts.

Shares of Apple (AAPL -1.80%) have popped today, up by 5% as of 2 p.m. EDT, amid a broad market rally driven by optimism regarding the coronavirus. Data from the Chinese government also showed a strong rebound in iPhone sales in China, as that country has made significant progress in containing the virus.

Apple shipped an estimated 2.5 million iPhones in China, according to Reuters, up from the roughly 500,000 units that the company sold in February. While those volumes are still down approximately 20% from March 2019, the significant improvement from February is giving investors hope that the economy will have a V-shaped recovery. 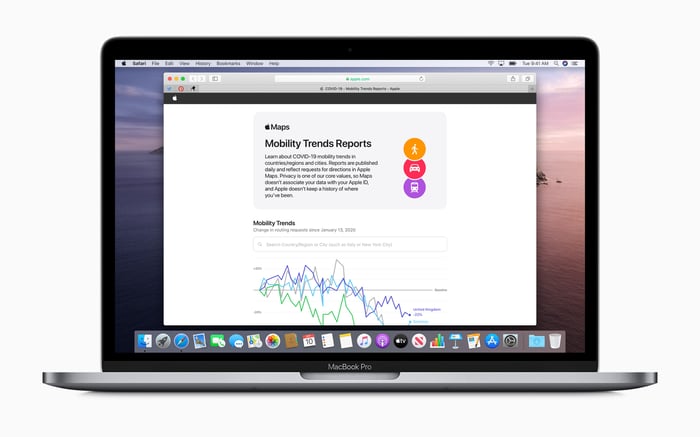 The Mac maker has also been trying to help mitigate the impact of COVID-19 in various ways, announcing today that it was releasing anonymized mobility data reports that can help inform local governments and public health officials. Alphabet (GOOG -2.57%) (GOOGL -2.45%) subsidiary Google started providing similar reports earlier this month. Apple and Google also recently announced a new partnership to collaborate on contact-tracing technology. The tech companies plan to release a Bluetooth-based contact-tracing platform "in the coming months." Contact tracing is one of the most important tools in tracking the spread of outbreaks.

On numerous occasions in recent years, CEO Tim Cook has said that he believes Apple's greatest contribution to mankind will be in improving people's health. Under normal circumstances, that pertains to Apple Watch and wearable technology, but the company is showing that it can also help during a public health crisis.

Apple reports fiscal Q2 earnings on April 30, and this quarter will include updates to the company's capital return program.