Please ensure Javascript is enabled for purposes of website accessibility
Log In Help Join The Motley Fool
Free Article Join Over 1 Million Premium Members And Get More In-Depth Stock Guidance and Research
By Will Ebiefung - Apr 14, 2020 at 8:30AM

The amusement park operator has no major debt maturities until 2024, but it's still in a perilous situation.

The coronavirus pandemic has hurt virtually every business in the United States, but amusement parks are especially vulnerable. Even if people wanted to go to a Six Flags (SIX 13.87%) park at a time like this, they wouldn't have the option. Government policies, as well as the company's decision to shutter its parks until May, ensure these assets won't generate much cash flow in the first half of 2020 if not longer.

To weather the storm, Six Flags has suspended its dividend and plans to significantly reduce capital expenditures this year. The company has also tapped its revolving credit line for an additional $131 million of liquidity. While these moves could help stave off some of the company's challenges, Six Flags is cutting it close. The company is no stranger to Chapter 11, and it finds itself in a similar financial condition as when it declared bankruptcy back in 2009. 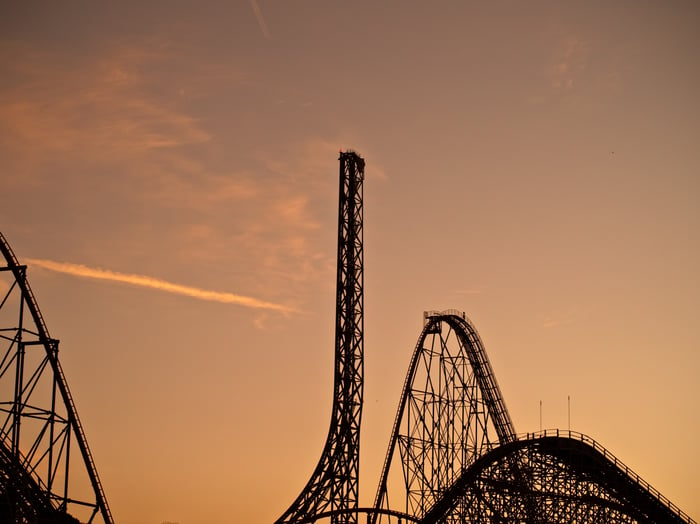 Six Flags' debt-driven business model may make it especially vulnerable to bankruptcy. In 2009, the company filed for Chapter 11 protection during the financial crisis when it was unable to refinance $287.5 million in preferred stock maturities and $131 million in senior secured notes. At the time, the company had over $2.5 billion in total debt on its balance sheet and had generated $275 million in EBITDA in full-year 2018.

After the bankruptcy, which erased approximately $1.7 billion in debt, Six Flags continued to pursue the same leverage-driven strategy by piling on debt to fund capital expenditures and pay its large dividend. By the end of 2019, the company's debt balance had climbed back to $2.3 billion with interest expense of $113 million that year. This would be a risky situation in normal market conditions, but the coronavirus outbreak makes it downright perilous.

Six Flags stock has fallen over 65% year to date, compared to a 15% decline for the S&P 500, as the pandemic threatens the company's most important operating season.

How will Six Flags survive the coronavirus?

Most U.S. states have mandated shelter-in-place orders that restrict non-essential activities, and amusement parks are not exempt from those rules. Six Flags has closed most of its parks until May or even later, so it will generate much lower revenue in the first half of 2020. For the first quarter, management expects revenue to decline $25 million to $30 million from the prior-year period when the company reported sales of $128.2 million. At the midpoint of the range, first-quarter revenue will be down over 21% year over year. If the coronavirus lockdowns extend into the summer months, the company could report disastrous figures for the the second and third quarters.

Six Flags reported $607.8 million of operating expenses in 2019, and it had only $23 million of cash as of March 31, 2020. With less revenue coming in to offset expenses, management is taking aggressive steps to increase the financial flexibility it needs to weather the storm.

For example, the company has suspended its dividend, which paid out $279 million last year. It has also increased the size of its revolving credit facility from $350 million to $481 million and pledged to reduce spending in 2020. Six Flags' CEO Mike Spanos is hopeful, stating the following in a press release released on April 8:

The increase in our revolving credit facility, combined with actions we have taken to reduce operating expenses and capital expenditures, provides us with significant runway to operate in this uncertain environment.

Six Flags may be slashing its operating expenses and capex this year, but the pandemic puts Six Flags in a tight situation reminiscent of its 2009 bankruptcy. The good news is that this time around, the company doesn't have any significant debt maturities until 2024, and there is still $420 million in the company's revolving credit facility.

Management expects net cash outflow to average $30 million to $35 million per month with the parks closed to the public. At this level of cash burn, the company believes it can tough it out until the 2021 operating season if necessary.

Bankruptcy may be off the table right now, but even the company has little clarity on the long-term effects of such an unprecedented situation. Investors should expect Six Flags to face an uphill battle and emerge from this crisis with an even weaker balance sheet.