Please ensure Javascript is enabled for purposes of website accessibility
Log In Help Join The Motley Fool
Free Article Join Over 1 Million Premium Members And Get More In-Depth Stock Guidance and Research
By Keith Speights - Apr 15, 2020 at 7:01AM

Plus a couple of things to dislike.

Few companies can legitimately claim to truly be one of a kind. But Planet 13 Holdings (PLNH.F 3.19%) is one of them. The company launched its cannabis SuperStore near the famous Las Vegas Strip that offers a unique customer experience.

Planet 13 reported its 2019 fourth-quarter and full-year earnings results after the market closed on Tuesday. There were three things that investors should really like about the company's update. 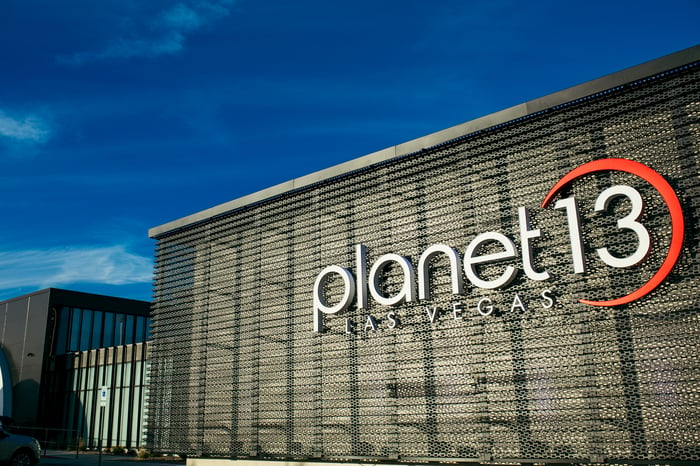 Planet 13 reported revenue in the fourth quarter of $16.5 million. That's a 99.8% jump over the prior-year period. It reflected a slight decline from the $16.7 million posted in the third quarter, but that dip wasn't troubling.

The company's co-CEO, Bob Groesbeck, noted that the fourth quarter is "a seasonally slow period." Fewer people visit Las Vegas during the Thanksgiving and Christmas holidays. To come close to the previous quarter's revenue level isn't too shabby.

Groesbeck said that one key to Planet 13's success during Q4 was the opening of phase 2 of its SuperStore. This addition boosted customer traffic and engagement as well as average ticket prices.

2. Another quarter of positive adjusted EBITDA

Granted, the company's adjusted EBITDA slipped from $3.4 million recorded in the third quarter. Planet 13 also still posted a net loss of $2.6 million and remains unprofitable. However, there aren't many cannabis companies that have consistently delivered positive adjusted EBITDA, so Planet 13's achievement is something for investors to like.

In addition to its 2019 full-year and fourth-quarter results, Planet 13 also provided a sneak peek at its first-quarter results. The company said that it expects to report 2020 Q1 revenue of around $16.6 million.

At first glance, you might wonder why a minimal increase from Planet 13's Q4 revenue would be something to like. Actually, though, the company's Q1 revenue is surprisingly strong considering that the COVID-19 outbreak caused a major disruption to Planet 13's business beginning in the middle of March.

Planet 13 benefited from a strong start to the year with its phase 2 expansion of the Las Vegas SuperStore fueling sales growth. The company also adapted quickly to the coronavirus crisis. Co-CEO Larry Scheffler said, "When cannabis dispensaries in Nevada were told to close, we pivoted to focus on our delivery business, and in only 25 days we've ramped our delivery service from five to twenty-eight vehicles and have shifted our customer mix from 15% local area residents, to 100%."

There are at least two things that investors shouldn't like about Planet 13's Q4 update.

The biggest negative, by far, is that the company's SuperStore remains closed to visitors. Even though Planet 13 has rapidly transitioned to serving cannabis customers in the local market through delivery services, you can bet that the company's financial results in the second quarter of 2020 will be dismal.

Also, Planet 13 ended 2019 with cash totaling $12.8 million. The company remains unprofitable, so it has to draw from its cash to some extent to fund operations. With its core business serving tourists shut down for an unknown amount of time, it's possible that Planet 13 could have to raise additional capital during a challenging period to do so.

Sooner or later, though, the COVID-19 crisis will be over. Life will return to normal (or as close to it as possible). When that day comes, Planet 13 should be able to resume its strong growth trajectory and go back to being a one-of-a-kind cannabis retailer.