Oil prices continued sliding today. West Texas Intermediate, the U.S. oil price benchmark, fell 1.2% on the day, closing below $20 a barrel for the first time since 2002. 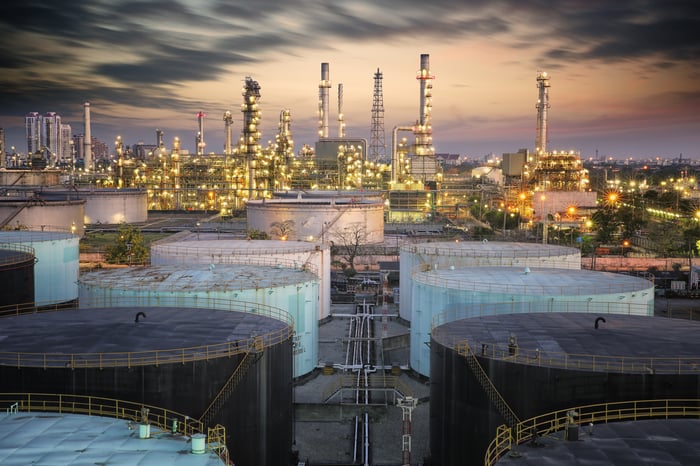 Oil demand has cratered from the COVID-19 outbreak. According to the International Energy Agency, oil consumption will decline by 9.3 million barrels per day (BPD) this year. To put that into perspective, it's a decade's worth of oil demand growth. The decline in consumption is causing oil to pile up in storage terminals and oil tankers. The U.S. Energy Information Administration, for example, reported a 19.2 million-barrel weekly storage increase today, the largest on record.

While OPEC recently secured a historic agreement with non-members to reduce output by 9.7 million BPD starting in May, that reduction isn't deep enough to address the near-term decline in oil demand. Analysts fear that crude oil prices could continue sliding until the global economy starts rebounding, which would help burn off some of the excess inventory.

Persistently slumping oil prices are forcing producers to take drastic action to stay afloat. Noble Energy, for example, announced an additional capital spending reduction today. The company has now cut its budget by 50%, which will result in deferring all its U.S. onshore activity until oil prices improve. Noble also slashed its dividend by 83% and identified additional expense savings, including reducing executive salaries by 10% to 20% through the end of this year.

Occidental Petroleum also took another step to preserve its financial flexibility today by paying the preferred dividend owed to Warren Buffett's Berkshire Hathaway (BRK.A -0.27%) (BRK.B -0.14%) in stock instead of cash. As a result, it issued 17.27 million shares to Berkshire, saving it about $200 million. That decision follows several other cash-saving moves from Occidental, including slashing capital spending and its dividend.

Hess and Ovintiv have also recently cut costs as they adjust to lower oil prices. Hess slashed its spending plan by 27%. Ovintiv, meanwhile, has cut spending twice to better align it with projected cash flows at lower oil prices. However, if oil keeps falling, both might need to make additional reductions to stay afloat.

The energy market meltdown is also putting pressure on asset values. Devon Energy had to rework a deal to sell its Barnett Shale assets in Texas. It initially agreed to sell them for $770 million in cash. However, the company revised those terms yesterday and will receive only $570 million up front and contingent payments of up to $260 million based on an improvement in oil and gas prices.

Oil remains under intense pressure because of the significant decline in demand following the COVID-19 outbreak. That's causing it to fill up storage capacity, putting more pressure on prices. Oil could keep falling unless demand snaps back quickly or producers in the U.S. shut off oil pumps so that the crude doesn't flow straight into saturated oil tanks.