Please ensure Javascript is enabled for purposes of website accessibility
Log In Help Join The Motley Fool
Free Article Join Over 1 Million Premium Members And Get More In-Depth Stock Guidance and Research
By Royston Yang – Apr 16, 2020 at 9:10AM

The COVID-19 pandemic has helped to sift out the wheat from the chaff among restaurant stocks.

The COVID-19 pandemic has caused widespread financial distress and resulted in massive job losses. The severity of this pandemic and its grim human toll suggests that this is a major problem that the world will have to grapple with months if not longer. Many industries such as food and beverage, travel, retail, tourism, and hospitality have been hard hit as countries close borders, announce lockdowns, and impose social distancing.

During challenging times like these, it's the quality companies that will continue to shine, and Texas Roadhouse (TXRH 0.68%) is one such example. The business has remained resilient and is a testament to how well the company has set itself up to deal with adversity. Though its share price initially plunged nearly 60% from its year-to-date high to just over $30 per share, the stock has since recovered to about $44 as of this writing. 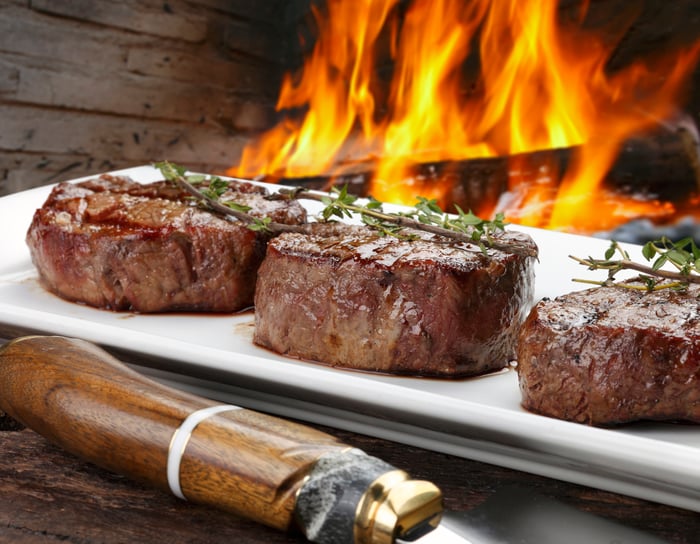 After the World Health Organization declared the COVID-19 outbreak a pandemic on March 11, President Donald Trump banned all travel from 26 European countries. Two days later, a U.S. National Emergency was declared, and many states shut down factories, schools, and retail establishments. These states also implemented limited or no dine-in policies for restaurants, thereby severely limiting their ability to generate revenue.

Despite these measures, Texas Roadhouse reported on March 19 that it has closed no domestic restaurants. All of its locations are operating at full capacity or with take-out options depending on location. The restaurant operator has even ramped up its "To-Go" program, value offerings, and curbside service to deal with the unprecedented situation.

These moves are a demonstration of management's resourceful contingency planning in shifting to online sales and a delivery/take-out model. Though revenue will surely suffer near term, the ongoing operations can help the company mitigate the magnitude of the decline.

On March 26, CEO Kent Taylor announced that he has chosen to forgo his salary and bonus for the period from March 18, 2020 through Jan. 7, 2021. "The additional funds will be made available to assist front-line hourly restaurant employees," according to the company's announcement.

And in April, the CFO, COO, and CMO followed suit, forgoing much of their base salaries and incentive bonuses for the period from April 1, 2020 through Jan. 7, 2021. Once again, the funds will go to front-line restaurant staff.

Beyond the positive reception this news has enjoyed in the media, it also shows that the management team is willing to make the necessary personal sacrifices to support other stakeholders within the company and boost the morale of their staff.

Finally, Texas Roadhouse's valuation has been pushed down to very attractive levels as a result of the recent decline. At its peak, the company was valued at close to 30 times trailing 12-month earnings. But at current trading levels, that multiple is now below 17. 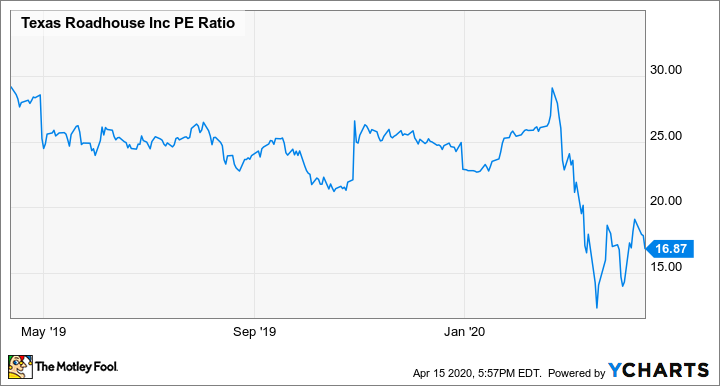 Though the U.S. government's timeline for lifting COVID-19 restrictions is uncertain, there is a lively debate regarding when to reboot the economy and how to minimize the negative effects of the shutdown. When that eventually happens, Texas Roadhouse can continue to execute its plans to expand its chain of steakhouses and Bubba's 33 outlets.

Texas Roadhouse reported $107.9 million of cash on its balance sheet and no debt at the end of 2019. Since then, the company has also drawn down $190 million under its revolving credit facility, raising its total reserves to over $300 million to ride out the crisis. Management noted it still has the option to increase the liquidity under its credit facility by an additional $200 million.

Though the uncertainty surrounding the pandemic has forced Texas Roadhouse to withdraw its guidance for the current fiscal year, the company has long been a best-in-class restaurant stock with a track record of raising its dividend and generating consistent free cash flow. The quarterly dividend has been temporarily suspended to increase financial flexibility, but I foresee the company restarting those payments once the dust settles. Investors should pounce, while shares are beaten down.