Please ensure Javascript is enabled for purposes of website accessibility
Log In Help Join The Motley Fool
Free Article Join Over 1 Million Premium Members And Get More In-Depth Stock Guidance and Research
By Keith Noonan – Apr 16, 2020 at 11:53AM

The movie theater industry has been crushed by the coronavirus crisis, but Cinemark expects to resume operations in the not-too-distant future.

Cinemark (CNK -5.04%) is planning to scale up operations by July 1 after months of operational shutdown due to the novel coronavirus pandemic. The company held a special investor conference call on April 15 detailing plans for a modified reopening of its business, according to a report from Deadline. The company also published a document on April 15 that outlined its liquidity strategy and some financial performance results from the 2019 fiscal year.

Cinemark plans to start marketing to potential theatergoers again in mid-June and then reopen at the start of the next month with showings of previously released films and reduced occupancy guidelines and ticket prices. Cinemark CFO and COO Sean Gamble indicated that it could take several months for the business to return to normal conditions after resuming operations. 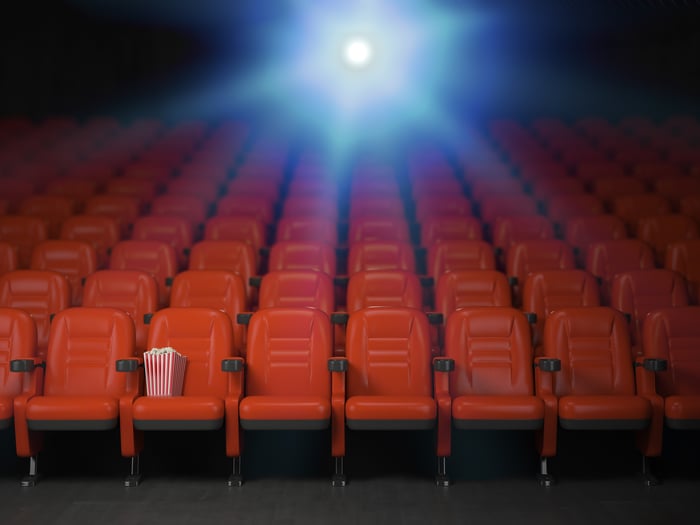 What's next for Cinemark?

Cinemark recently announced that it had secured $98.8 million in credit -- with the caveat that the new liquidity line was subject to closing procedures and could change substantially by the time the company files its next quarterly report. In addition to the new credit, the theater chain has a cash balance of $479.4 million and believes that it has a strong enough balance sheet to remain solvent into 2021 even if cinemas remain fully closed across the stretch.

All of Cinemark's theaters in North America and Latin America have been closed due to the novel coronavirus since March 18. The plan to restart the business comes on the heels of recent news that the company had laid off 17,500 employees and furloughed half of its corporate staff at a 20% pay rate. While Cinemark has made some pushes into the streaming video space, the vast majority of its business still depends on ticket sales at cinemas.