Please ensure Javascript is enabled for purposes of website accessibility
Log In Help Join The Motley Fool
Free Article Join Over 1 Million Premium Members And Get More In-Depth Stock Guidance and Research
By Bram Berkowitz - Updated Apr 16, 2020 at 10:16AM

Let's look at the credit profile of the U.S. banking system now compared to how it looked on the eve of the Great Recession in 2006.

Many experts and economists expect the coronavirus pandemic to result in a recession that could be as bad as, or even worse than, the 2008-2009 financial crisis. Although the fundamentals behind this looming recession are quite different from what occurred during the Great Recession, and the Federal Reserve is intervening in a much more significant way, this is definitely the biggest test for the U.S. banking system in a decade.

The big question is whether the banks, after enhanced regulation and more than 10 years to reflect, are ready for what's coming. Let's take a look at the risk profile of the banking system now compared to how it looked on the eve of the Great Recession. 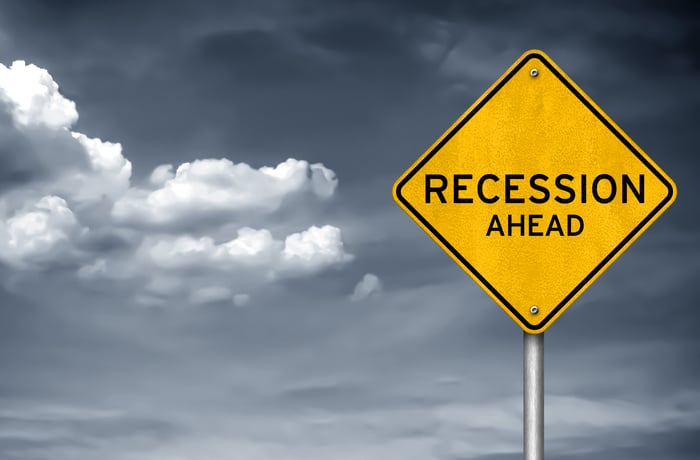 As I go through the numbers, I am going to compare banks at the end of 2019, the most full and recent data set available, to banks in the third quarter of 2006. This is when some of the first red flags began to emerge that the banking system was in trouble; by 2007, credit quality had already begun to deteriorate. All this data is from the Federal Deposit Insurance Corp. (FDIC) and includes all of the nation's banks, both public and private.

The Great Recession changed the U.S. banking system dramatically. Consolidation, bank failures, and a lack of de novo activity -- that is, newly chartered start-up banks -- have significantly reduced the number of banks in the U.S. However, that smaller group of banks has added trillions of dollars in assets.

As we approach another crisis, credit quality, as in 2006, looks solid. Both the ratio of nonperforming loans (loans 90 days past due) to total loans and the ratio of net charge-offs (debt on loans unlikely to be recovered) to total loans are at lows for the decade. Still, they are higher than they were in 2006.

In one instance, you could argue that because there are more charge-offs now, banks might be more conservative and strict when it comes to their judgement of credit. On the other hand, the uptick in charge-offs and nonperforming loans could simply be a result of banks today issuing more commercial loans, which are inherently riskier than mortgage loans.

I think all these metrics really tell us is that years of strong economic conditions can conceal true credit quality. One can never assume that good asset quality means anything on the eve of a recession.

The banking system today is less reliant on loans. While the nation's banks have added $6.8 trillion in assets, less than half that amount is from new loans. This is also during a decade of super-easy lending conditions because rates have been at or close to zero. This suggests that banks' assets are more diversified now than they were in 2006.

Another big trend in the banking industry is the shift from residential mortgage lending to commercial. Because interest rates have been so low since the Great Recession, it has been hard for banks to make any meaningful yield off standard mortgage products. So, the industry has shifted its focus from residential loans to originating many more commercial loans, which typically come with higher interest rates. Residential mortgage volume declined between 2006 and 2019, while three of the main commercial loan categories saw significant increases.

This means that we need to watch the commercial sector closely. While there is a lot of talk about the mortgage market because of all of the mortgage deferments, the commercial sector has grown tremendously since the Great Recession and is largely untested. These loans are going to experience pressure given that revenue at most businesses is drying up because of social distancing measures and the inability to interact in person.

After the Great Recession, lawmakers enacted the Dodd-Frank bill, sweeping bank legislation intended to ensure that a Great Recession never happens again. A big part of that was requiring every bank in the country to hold more capital in order to act as a cushion should the economy take a nosedive and many loans default simultaneously. The banks have indeed raised their capital levels. The combined tier 1 capital ratio, a measure of a bank's core equity capital to its total risk-weighted assets, is more than 2.5 percentage points higher now than in 2006. The total risk-based capital ratio, which measures a bank's core equity capital (tier 1) and less secure supplementary capital (tier 2) together as a percentage of risk-weighted assets, was 1.59 percentage points higher.

That said, it's not as if banks had no capital built up in 2006. Let's take a look at the loan loss allowance to nonperforming loans ratio, which shows how prepared a bank is to deal with bad loans. The loan loss allowance is the cash banks set aside to cover bad loans, while nonperforming loans, as mentioned above, are loans a borrower has not made a payment on in at least 90 days. So basically, this ratio tells you how much cash the bank has set aside for a pool of loans with poor credit quality. At the end of 2019, the loan loss allowance to nonperforming loan ratio for all banks was about 130%. But in 2006, that ratio was nearly 148%. The first few banks to report earnings this quarter do seem to be increasing their reserves significantly, which is a prudent measure. But contrary to popular belief, banks weren't completely unprepared when it came to capital before the Great Recession -- there were other factors at play that contributed to the crash.

One can never truly know, but the banking system has changed dramatically since 2006. There are fewer banks holding more assets, and the makeup of those assets is quite different. Banks are less reliant on loans, and the industry, in search of yield, has shifted its focus away from home mortgages to riskier commercial loans. The good news is that the banks have the Great Recession to look back on and glean insights from, as well more capital to stomach loan losses. Will it be enough? We'll just have to wait and see.

What Marqeta's CEO Stepping Down Means for You

These Are the 16 Stocks Warren Buffett Has Bought in 2022