The company is waiving fees for new users through June 30 as well.

As the U.S. economy reels in the grip of COVID-19 and stimulus payments from the government are on their way to citizens, Walmart (WMT 0.27%) said yesterday that it's helping its customers get direct deposits of the funds via MoneyCard. In a press release by CCO Janey Whiteside, the company announced a straightforward method by which people who lack bank checking accounts or who prefer to use Walmart's financial services can receive their stimulus money much sooner than waiting for a paper check.

The Coronavirus Aid, Relief and Economic Security, or CARES, Act will see many individuals in the USA receive $1,200 and couples get $2,400. Direct deposits to those with bank routing information on file with the IRS have already begun. However, those without bank accounts or who decline to give the tax bureau their bank information will receive checks in the mail instead, which will be mailed out in waves over the next five months. 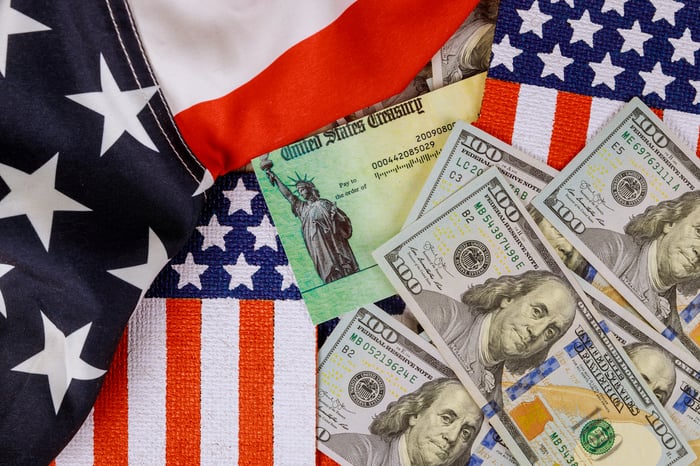 Approximately 57% of the poorest Americans, making half or less of the Federally established poverty level, have no bank account to receive the stimulus money, according to Poverty Solutions research. Even for those above the poverty line, approximately 20% could see major delays before getting their checks.

Walmart's MoneyCard solution lets new users accept direct deposit of their stimulus payment by signing up online at WalmartMoneyCard.com. / The company points out that the process can be completed safely at home without potentially infectious exposure to other people, unlike the process of cashing or depositing a physical check. It is waiving monthly maintenance fees for new users between April 10 and June 30, and mails a debit card which typically arrives within a week of signup.