Please ensure Javascript is enabled for purposes of website accessibility
Log In Help Join The Motley Fool
Free Article Join Over 1 Million Premium Members And Get More In-Depth Stock Guidance and Research
By Dave Kovaleski - Apr 16, 2020 at 11:35AM

The hotelier has outperformed many of its competitors.

Travel has been severely restricted by the stay-at-home orders throughout the country due to the coronavirus pandemic, but Choice Hotels International (CHH 1.71%) has managed to outperform many of its hotel peers through the downside.

In the past month, the stock has climbed about 12% and is down about -28% for the year in trading on April 14, which is slightly outperforming its sector.

Here's why the stock is moving back up.

Choice Hotels has made several moves to bolster its liquidity and reduce costs through this pandemic.

Given the broad-based uncertainty of the current environment, we have taken decisive actions over the past several weeks to position the company for changing market dynamics and enhanced our financial flexibility to sustain the long-term health of the business. ... We are confident in our ability to weather this storm, while supporting our franchisees as they navigate uncharted waters. 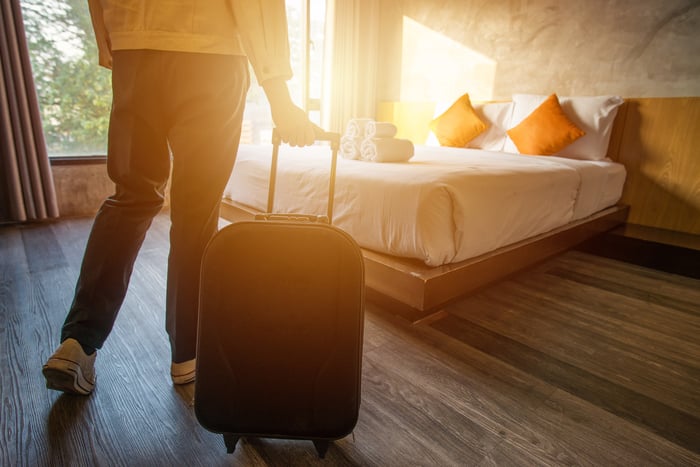 On the expense front, the company benefits from its franchise-only business model, which has lower capital expenditure requirements than many of its competitors. The company doesn't have as many brand standards that the franchisees have to follow, which provides them the flexibility to run their hotels as their markets dictate. It's also resulted in a very steady revenue stream for the company.

But beyond that, Choice Hotels has slashed expenses in several ways. In the business update, company officials said the salaries and compensation for board members, CEO Patrick Pacious, along with other executives have been reduced for the remainder of 2020. Further, the company has temporarily furloughed some workers in Europe, where government-mandated closures and shutdowns are more common. Also, Choice Hotels has implemented a hiring freeze, except for certain critical positions, and halted its 401(k) match for the time being.

To boost liquidity, it suspended its share-repurchase plan and dividends for the rest of 2020. Also, the company reported that it has $489 million in cash and revolving credit facility with the option to increase capacity.

In addition, the company extended deadlines for capital projects and allowed for more flexibility in brand-standard options. It also advocated for broader government relief and CARES Act benefits for franchisees.

Occupancy rates have not dropped at Choice Hotels as sharply as they have at some of its competitors. This is because most of its hotels in the U.S. are in rural or suburban areas or are located off interstate highways. They have fewer properties in areas that have been most effected by coronavirus, including cities and resort areas.

Company officials said 90% of its hotels in the U.S. continue to operate. In March, Choice Hotels' occupancy levels averaged below 50%, but late in the month and into early April the occupancy rates fell to between 26% and 33%. In the business update, Choice brass said its hotels have been out-performing upper-midscale, midscale, and economy chains with stronger RevPAR (revenue per available room) over the past five weeks.

The firm has been providing rooms at discounted or free rates to government and emergency-management groups. Some hotels have been used for hospital overflows, and as temporary housing for first responders and displaced service members.

The hotelier will provide additional details when it releases first-quarter earnings in May. However, company officials are bullish on their prospects once the pandemic ends and stay-at-home orders are lifted. As Choice Hotels cater more toward leisure travelers, the company should rebound faster than its competitors because the demand for drive-to leisure hotels will be higher in the initial phases of the recovery. It will likely be a good stock to own on the other side of this crisis.