Please ensure Javascript is enabled for purposes of website accessibility
Log In Help Join The Motley Fool
Free Article Join Over 1 Million Premium Members And Get More In-Depth Stock Guidance and Research
By Aditya Raghunath – Apr 17, 2020 at 8:25AM

Early investors in this tech stock would have seen a massive increase in wealth. Here's what makes TTD a winning bet in the long term.

Stock in The Trade Desk (TTD -3.51%) first went on sale to the public back on Sept. 21, 2016. The IPO was priced at $18 per share, and the stock closed at $30.10 a share on the first day of trading, up 67% in just a single session. The Trade Desk stock went on to generate massive returns over the next few years and is trading at around $233.40 as of this writing. It had previously touched an all-time high of $323.78 a share before the wider market turmoil of the past few months bumped it down.

So how much would an investor have if they invested $1,000 just after its IPO? An investor could have purchased 33 shares for $993.30, and that position would now be worth $7,702, yielding seven times the original investment, easily outperforming the S&P 500 index. For investors who bought the stock at its IPO price, this gain stands at an even more impressive 1,196% return. 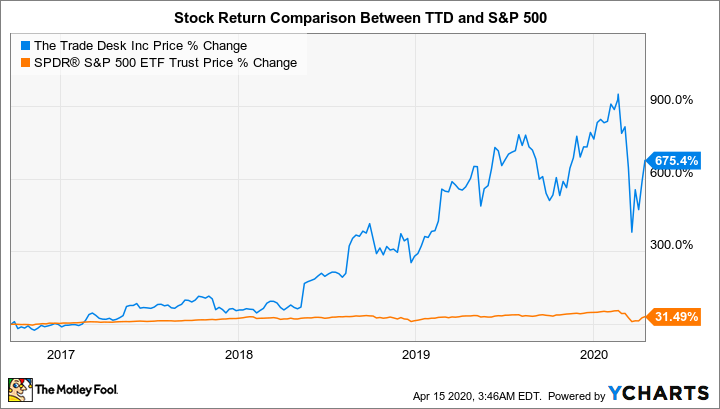 The Trade Desk is a programmatic advertising company and aims to empower digital ad buyers. Its cloud-based platform helps advertisers create, manage, and optimize data-driven ad campaigns across several channels, in multiple formats including audio, video, in-app, and a range of devices such as mobile, computers, and connected TV (CTV).

The Trade Desk has integrated its platform with large publishers and data partners to help ad buyers with decision-making capabilities. The platform launched in 2011 and targeted the display advertising space. It has now expanded into other ad formats, and in 2019 about "79% of gross spend" was from mobile, video, audio, and social channels.

The Trade Desk provides services primarily to ad agencies. It enters into master service agreements with clients and generates sales by charging them a platform fee, which is calculated as a percentage of their total ad spend. Its open platform also helps advertisers customize and build their own features on top of the company's platform.

Why is The Trade Desk optimistic about long-term growth?

While the digital ad spend is on an upward trend, so is the acceleration of audience fragmentation. Currently, target audiences use multiple media channels such as mobile apps, online streaming, and websites, which makes it difficult for advertisers to reach a large audience base. This provides an opportunity for The Trade Desk that can not only consolidate but also simplify media-buying options for clients. 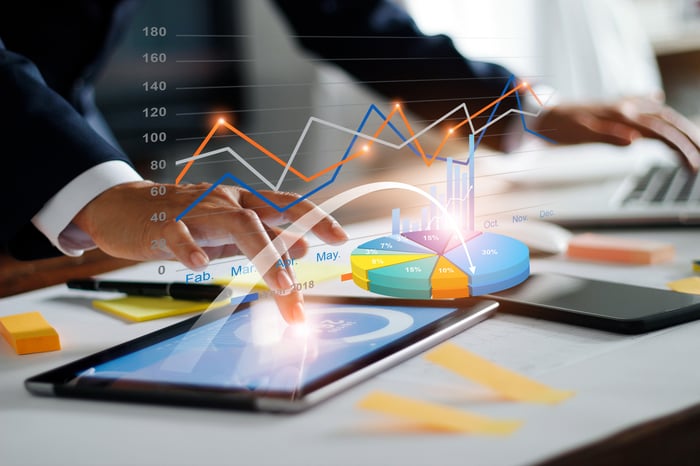 The convergence of TV and the internet is probably the largest driver of growth for The Trade Desk. There will be a massive shift in terms of online content consumption all around the world, and this cord-cutting phenomenon holds this company in good stead. The rollout of 5G technology will accelerate this transition, which will bring faster downloading speeds and enhance the user experience. The flexibility of the consumption in online content will increase ad budgets in the CTV segment.

The Trade Desk is banking on its expertise to leverage the power of data and automate the ad-buying process to a certain extent. Programmatic advertising helps clients get real-time feedback, which increases the value of ad impressions. The automation of ad processes will lead to better price discovery, which will also help optimize a client's ad budget.

What next for investors?

Programmatic advertising represents a small portion of the total ad market. In the current uncertain environment, marketers need to do more with less. This means ad agencies and related players will have to optimize ad spend across digital channels. This should provide a near-term tailwind to players including The Trade Desk, and offset any weakness arising from a decline in overall ad spending due to a drop in consumer demand and a slowing global economy.

The Trade Desk has been a top growth stock ever since its IPO three-and-a-half years ago. The company has managed to increase sales from $113.83 million in 2015 to $661 million in 2019. The gross spend on The Trade Desk platform has risen from $552 million to $3.12 billion in this period.

As with most growth stocks, profitability is not a major concern for the company. The Trade Desk aims to reinvest retained earnings to improve its technology and expand customer base, which in turn will drive revenue growth. While revenue has grown at an annual rate of 55% in the last four years, technology and development expenses are up 74%, while platform expenses have risen 61.5%.

The Trade Desk has a market cap of $10.64 billion. It has a forward price-to-sales ratio of 13.5 and a forward price-to-earnings multiple of 70.3. Yes, the company is trading at an expensive valuation, but growth stocks generally tend to do so. The Trade Desk's expanding addressable market, leadership position, and transparent platform make it one of the safest bets for long-term investors.