Please ensure Javascript is enabled for purposes of website accessibility
Log In Help Join The Motley Fool
Free Article Join Over 1 Million Premium Members And Get More In-Depth Stock Guidance and Research
By Dan Caplinger - Updated Apr 17, 2020 at 9:02AM

The problems caused by the COVID-19 pandemic aren't limited to U.S. companies.

The U.S. has taken a hard hit from the novel coronavirus pandemic, with the most cases of any nation on Earth and a rising death toll. Yet the economic impacts of governments and businesses responding to the COVID-19 outbreak don't respect international borders. Even in far-flung parts of the world, you can see the effects that the shutdowns of businesses are having on local economies.

Recently, investors got a reading on the state of the Latin American banking sector in the earnings release of Panama's Banco Latinoamericano de Comercio Exterior (BLX 1.86%). The bank better known as Bladex saw some deterioration in some key metrics during the first quarter of 2020, and even though it remains well-capitalized to handle future issues, Bladex succumbed to the need to reduce its dividend payment for the quarter -- disappointing those who had come to appreciate the bank's double-digit percentage dividend yield and making some wonder whether U.S. bank stocks could have to do the same in the near future. 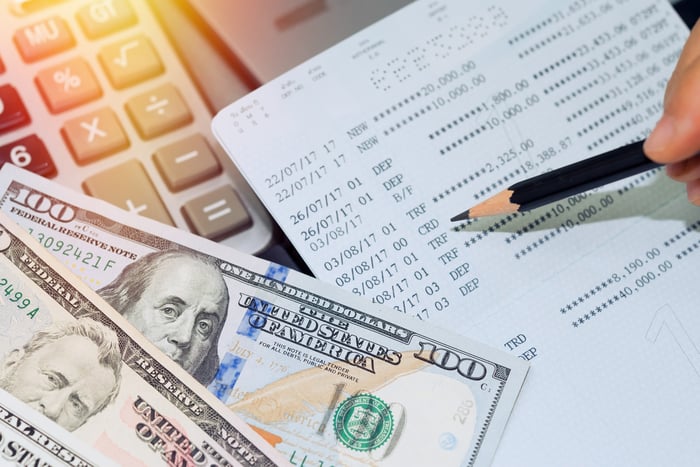 How Bladex fared to start 2020

Bladex's Q1 results showed some of the same pressures that its U.S. counterparts suffered through during the first quarter. Total revenue dropped 10% year over year to $28.8 million. Net income of $18.3 million was also down significantly from the prior-year period falling 14% and resulting in earnings of $0.46 per share.

The bank's fundamentals offered more specifics about what's hitting it so hard. Net interest income was down 8% year over year, with net interest margins falling substantially because of the drop in short-term interest rates recently. Even a healthy rise in fee and commission-based revenue wasn't enough to offset the declines elsewhere.

Rising expenses also hurt Bladex's profits. Operating costs were up about 6% from the year-ago period, and that pushed returns on equity down from 8.6% last year to 7.2% in the most recent quarter. Returns on assets saw similar declines, and Bladex had its efficiency ratio move in the wrong direction by 6 full percentage points to 36.7%.

From a creditworthiness standpoint, Bladex's numbers were solid. Capital ratios remained healthy at 21.8%, and loss allowances were close to unchanged compared to where they were 12 months ago. The bank cited revised outlooks for industries hit by the COVID-19 pandemic in boosting loss allowances from their levels at the end of calendar 2019.

Can Bladex survive the coronavirus crisis?

New CEO Jorge Salas acknowledged the huge impact that the pandemic will have on the economy both regionally and globally, but he remained optimistic in how Bladex has responded. "In view of the magnitude of this crisis and the sudden and profound impact on global markets," Salas said, "the Bank took rapid steps to preserve liquidity and was able to increase its cash position because of its historically diversified and stable funding sources."

However, that wasn't enough to let Bladex avoid making changes to its dividend policy. As the CEO put it, "The Board decided to continue to distribute dividends. However, now that capital preservation is an overarching priority, the Board reduced the first interim dividend to $0.25 per share." That's down by more than a third from the $0.385 per share that Bladex has distributed each quarter for the past several years. The new payout still represents a dividend yield of close to 10%.

Bladex shareholders weren't entirely comfortable with the report, but although they initially sent the stock lower by about 6% on the news, shares later rebounded to finish higher on the day of the announcement. Since then, though, Bladex stock has moved lower in tandem with bank stocks worldwide. There's still a lot of uncertainty about how the banking industry will look both in the U.S. and in areas like Latin America and the Caribbean. Until more is known, Bladex could remain volatile -- and could eventually see even larger cuts to its dividend if things don't improve. Moreover, Bladex's dividend move could foreshadow the need for its U.S. counterparts to make similar cuts in the near future.