Please ensure Javascript is enabled for purposes of website accessibility
Log In Help Join The Motley Fool
Free Article Join Over 1 Million Premium Members And Get More In-Depth Stock Guidance and Research
By Donna Fuscaldo - Apr 17, 2020 at 8:29AM

With businesses slashing their ad spending, the near-term picture for the social networking giant looks ugly. But there are reasons for optimism.

With Facebook's (META -0.76%) ad sales falling off a cliff and its stock price down by a double-digit percentage since the start of the year, it would be easy for investors to lose faith in the social media giant.

After all, nobody knows how long the COVID-19 pandemic will last, nor how heavy its ultimate impact on the global economy will be. And the tech company has already warned that the pandemic will cause it to miss its revenue target for the first quarter.

Yet despite the uncertainty and near-term pain, just 12 months from now, Facebook could be in a much better position than it is today. Here are three reasons why. 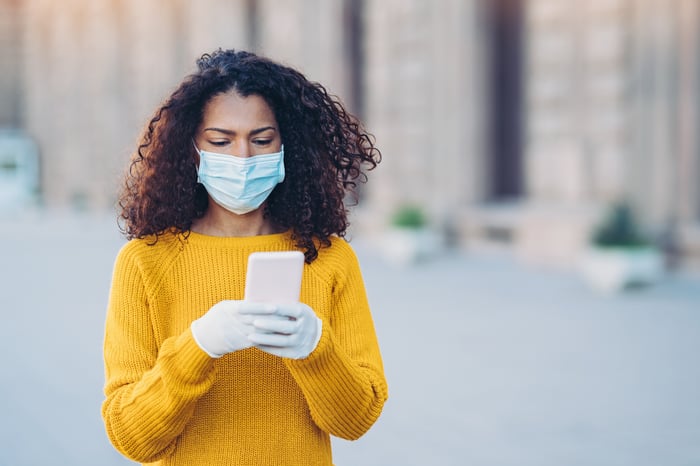 1. Advertisers will return to Facebook once the dust settles

As the COVID-19 pandemic has rapidly spread through the U.S. and Europe, Facebook's stock price lost around a third of its value, though it has gained back a bit of that recently. With people sheltering at home, most travel in a state of suspension, and millions of small businesses shuttered temporarily, Facebook's ad sales are plummeting.

But at the same time, usage of its platforms is skyrocketing. Facebook was already one of the preferred places for its 2.5 billion active users to get news and information, but the pandemic has driven engagement even higher. In many of the hardest-hit countries, messaging across its services increased more than 50% month over month in March. Voice and video calling on its Messenger and WhatsApp more than doubled.

Facebook may not be making money off that increased user engagement now, but it could in the future. If the virus is contained sooner rather than later and the government stimulus is enough to keep many businesses afloat, the economy will improve, which could mean ad spending will pick up. "There is every reason to believe that the economic rebound, when it comes, can be robust," said Federal Reserve Chairman Jerome Powell during a webcast speech last week.   Even if the pandemic and the need for social distancing last longer, once the dust settles, Facebook should have more engaged users than prior to the pandemic since it has become a go-to destination to find COVID-19 information, which will keep it attractive to companies of all sizes looking to advertise.

While it's anyone's guess as to when stay-at-home orders will be lifted and businesses reopened, Facebook is already positioning itself to be ready when things go back to normal. For instance, it is currently going after ad budgets that were earmarked for televised sporting events, pitching its video ads as a place to spend those dollars. It's also trying to help struggling small businesses during the pandemic which boosts goodwill among this group. Then there's the 2020 U.S. presidential election. As we get closer to the election, spending on political ads should increase.

Since the 2016 U.S. presidential election, Facebook's reputation has taken a huge hit as revelations about privacy breaches and abuses of its platforms have raised the ire of lawmakers, privacy experts, and consumers. The company was hit with a $5 billion fine by the Federal Trade Commission in July, and some called for it to be broken up.

Then the COVID-19 pandemic hit, and Facebook made some choices that may serve to improve its reputation.  It has teamed up with the Centers for Disease Control, the White House Coronavirus Task Force, and the World Health Organization to help get accurate information about the pandemic to its users. It's providing tracking data to researchers and the medical community to help them gauge how social-distancing efforts are working, and it's helping small businesses by selling gift cards and giving them free ad space. All of that is likely building goodwill that could provide Facebook with the redemption it is seeking. It could also lead to a lessening of intensity in the regulatory scrutiny Facebook is under.

With $55 billion in cash on its balance sheet, Facebook isn't hitting the pause button amid the pandemic. It continues to churn out new products, and is still in hiring mode; COO Sheryl Sandberg says the company expects to hire 10,000 people for its product and engineering teams this year. Just this week, it rolled out Tuned, an app that lets couples create a private digital space that only the two of them share, and announced early access to Facebook Tournaments, a feature that lets people stay connected via games.  Those are just two examples of how Facebook is continuing to innovate as its users and engagement numbers surge.

There's no question the social media industry is taking a huge revenue hit as ad spending plummets. Against that backdrop, analysts' estimates for Facebook are holding up, as are their 12-month price targets. At last count, Wall Street analysts had a median price target of $225 on Facebook, implying more than 28% upside in a year. The most bullish of them foresee shares appreciating by 71% to $300. Pretty impressive for a company that's expected to see its ad revenues shrink by billions of dollars in the first quarter.