The industry hasn't seen some of these levels in decades.

The COVID-19 outbreak has caused much of the global economy to shut down. That's had an enormous effect on oil demand, as well as pricing. The numbers are truly stunning.

Here's a look at several oil market stats that show the pandemic's immense impact on the oil patch.

9.3 million barrel per day (BPD) in demand destruction this year

The International Energy Agency (IEA) forecasts that oil demand will plummet a record 29 million BPD in April. Overall, the IEA estimates that global oil consumption will drop by 9.3 million BPD this year to an average of 90.5 million BPD, effectively wiping out a decade of consumption growth. 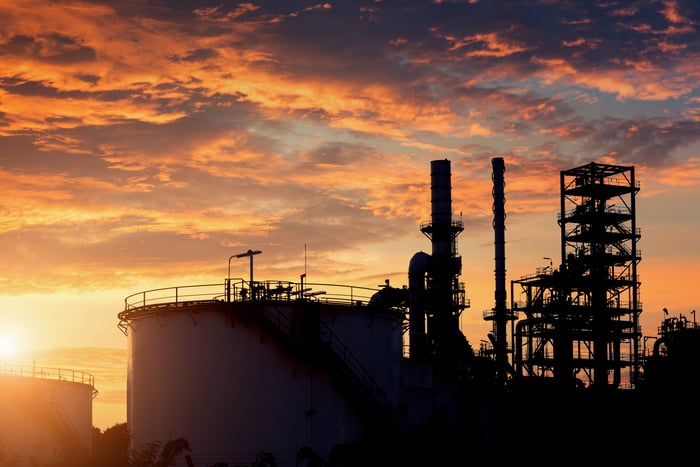 OPEC, meanwhile, is a bit more optimistic. It only expects a 20 million BPD decline in oil demand this month, putting it at its lowest monthly level since 1989.

Meanwhile, it expects full-year consumption to average 92.8 million BPD, 6.9 million BPD below its previous outlook. That significant demand destruction led the organization to spearhead a coordinated global effort to reduce oil supplies by a record 9.7 million BPD starting next month.

With oil demand cratering, supplies are quickly piling up in storage. The U.S. Energy Information Administration (EIA) reported that oil storage levels in the country rose by a staggering 19.25 million barrels over the past week. That's the biggest weekly inventory rise in history, shattering the prior record of 15.18 million barrels from the previous week.

As of April 10, the U.S. had 503.62 million barrels of oil sitting in storage facilities around the country, according to an analysis by Platts. The country's largest hub in Cushing, Oklahoma, was at 70% of its capacity, while storage facilities were about 57.4% full nationwide.

At the currently projected pace of inventory growth, the country will run out of room to store oil by mid-May, according to an estimate by oil pipeline and storage operator Plains All American Pipeline (PAA -1.21%). Because of that, Plains All American and some of its peers have urged producers to shut in wells to ease the storage strain.

The drop in oil demand, combined with crude supplies piling up in storage, are putting tremendous pressure on prices. The U.S. oil price benchmark, WTI, recently closed below $20 a barrel, which was the first time it finished below that level since 2002. Year-to-date, oil prices are down by two-thirds.

Crude oil prices could continue crashing, given the issues with oil storage levels. Because of that, several energy companies heeded the call of storage operators like Plains All American by voluntarily reducing their output. Continental Resources (CLR -1.36%) said it would cut its production in April and May by 30%.

Meanwhile, ConocoPhillips (COP -1.80%) will curtail about 125,000 BPD of output in the country starting next month. On top of that, ConocoPhillips and a partner will reduce production at a Canadian oil sands facility by 100,000 BPD by the end of this month. Parsley Energy (PE) has shut in 400 lower producing wells, while helping spearhead an effort to get Texas' energy regulator to mandate a statewide 20% production curtailment. If more producers don't shut in additional wells, oil prices could keep falling until they're unprofitable to operate.

Conditions will likely get worse

With demand falling to levels not seen in decades, and oil piling up in storage, pricing will likely remain at multi-year lows for quite a while because it will take the economy some time to burn off the excess inventory. That will have a tremendous impact on the U.S. oil industry, which has already slashed spending and shareholder payouts to stay afloat.

Unfortunately, many companies won't survive this downturn. Several have already filed for bankruptcy, while others could join them in the coming months. Because of that, investors need to brace themselves for what will likely remain a very challenging period for the sector in the months ahead.