Please ensure Javascript is enabled for purposes of website accessibility
Log In Help Join The Motley Fool
Free Article Join Over 1 Million Premium Members And Get More In-Depth Stock Guidance and Research
By Donna Fuscaldo – Apr 18, 2020 at 10:30AM

Both Apple and Alphabet are leaders in their respective businesses, but when it comes to which is the better buy, Apple has the edge at the moment.

In the midst of the COVID-19 pandemic, it has become a bit harder to distinguish the haves and have nots among tech stocks.

After all, companies and consumers across the globe are hurting, which means less business for all sorts of otherwise solid tech firms. That's true of both Alphabet's (GOOG -1.98%) (GOOGL -1.82%) Google on the advertising front and Apple (AAPL -3.00%) on the retail side of its operations. Both have been contending with declining revenues that have pressured their share prices since mid-February. But once the pandemic is contained and shelter-in-place rules are relaxed, it's pretty clear that Alphabet and Apple will be OK thanks to their diversified businesses and large amounts of reserve cash in their coffers.

Having said all that, there are some reasons why, even in these unprecedented times, Apple is the better buy of the two companies right now. Let's look at those reasons. 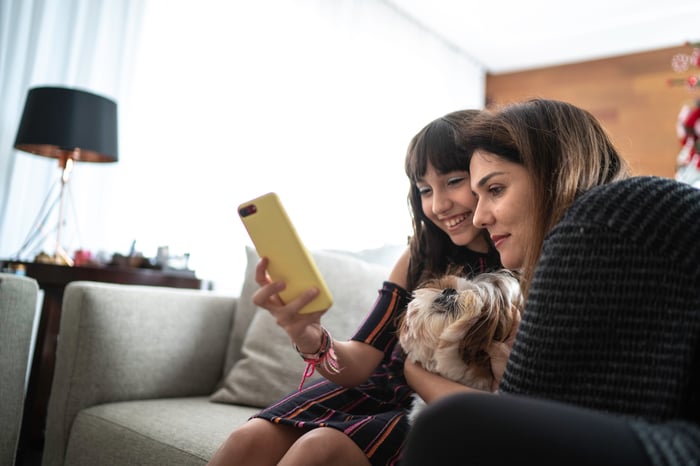 The stock market hates uncertainty. Even amid the volatility generated by the pandemic, that's been the only constant. But for Apple, there's a little less of it than with Alphabet. That's because Apple already lowered its projections for the current quarter's earnings due to the pandemic. Alphabet, on the other hand, hasn't said anything about the impact the slowdown in advertising for Google -- which accounts for the majority of its quarterly revenue -- is having on its bottom line.

In early February as the pandemic spread across China, Apple issued a second-quarter revenue warning, blaming supply chain disruptions and shelter-in-place rules that hurt sales of its iPhones. Investors reacted by sending shares of Apple lower. But that was weeks ago, and investors have had time to digest everything that has happened as the pandemic spreads across the U.S. That time has helped Apple's stock recover some of the COVID-19 losses in the share price.

Alphabet hasn't had that earnings warning sell-off yet, even though the stock took a hit when Facebook and Twitter issued earnings warnings for their current quarters. The two social media companies cited a steep decline in advertising sales despite an increase in usage on their platforms. That same phenomenon is likely playing out at Alphabet, which means first-quarter earnings could be painful for the internet search giant and thus its stock. Cowen & Co., the investment banking firm, thinks Alphabet's Google segment will see ad revenue decline a staggering $28.6 billion in 2020 because of the pandemic.

There's light at the end of the tunnel

The COVID-19 pandemic is still spreading through the U.S. and the rest of the world. But even amid the malaise, Apple is showing signs of life that weren't present a couple of months ago. Take iPhone sales in China. This week, reports indicated that Apple shipped about 2.5 million iPhones in the country during March, up from a mere 500,000 in February. Apple did allow resellers in the country to offer deep discounts to move iPhones.

For all of March, the China Academy of Information and Communications Technology said total mobile phone shipments came in at 21 million, which is three times higher than in February. On a year-over-year basis, smartphone sales were down 20% in March. China is an important market for Apple. With a 5G iPhone on the horizon, a return to normalcy in the country will be welcome news for the company and its stock.

It may also be indicative of what plays out in the U.S. Once the virus is contained and businesses are open again, pent up demand could drive sales of the iPhone. Alphabet may not be so lucky with ad spending, at least in the U.S. With millions of small businesses -- many of which run ads online -- hurting amid the pandemic, it may take longer for Alphabet to see a recovery.

Apple is on the cusp of a huge upgrade cycle

Before the pandemic, investors were preparing for what was expected to be a super upgrade cycle spurred on by the launch of Apple's 5G iPhone. But that optimism dissipated as the pandemic spread from China to Europe and eventually the U.S. Rumors abounded that Apple would delay the 5G iPhone, perhaps until next year.

But now all signs are pointing to Apple launching its much-awaited 5G iPhone this fall. Sure it may not be in September, the typical time Apple debuts new smartphones, but the tech company is still expected to launch at least one iPhone 5G during the fall time frame. There's even talk Apple could roll out several 5G models, giving consumers in all price points a reason to upgrade their smartphone.

It's already proven it can still innovate even during a pandemic. In March, Apple launched a new iPad Pro with built-in 3D scanning technology. Billed as its most advanced iPad Pro, it was impressive that Apple could get it done amid these trying times. Just this week, Apple launched the iPhone SE, a low-end smartphone that starts at $399. Alphabet is seeing increased demand for its digital collaboration tools and is growing its cloud business, but it doesn't have a huge product announcement on the horizon that will boost its stock like Apple.

Alphabet and Apple are leaders in their respective industries and will likely both thrive in the years to come. But with a lot of potential stock-driving news on the horizon for Apple in the near-term, it's the better buy.