Please ensure Javascript is enabled for purposes of website accessibility
Log In Help Join The Motley Fool
Free Article Join Over 1 Million Premium Members And Get More In-Depth Stock Guidance and Research
By Lawrence Rothman, CFA - Apr 19, 2020 at 11:50AM

The company is adopting stiff measures in the face of the coronavirus, but its emphasis on used vehicles and other services should help the company recover.

AutoNation (AN 7.42%) has been beset by problems stemming from the onset of the coronavirus and widespread stay-at-home orders. That obviously prevents people from going out to buy a car, and the data backs this up with March's retail sales down 8.7% and the motor vehicle and parts category dropping 25.6%.

Additionally, with unemployment rolls rising rapidly, this creates yet another challenging situation for the company since people are more likely to hold off on car shopping in difficult economic times.

Thus, it's not surprising that the share price is down 35% year to date. That may be tempting to investors, but other issues are worth examining before deciding if this is an attractive buying opportunity. 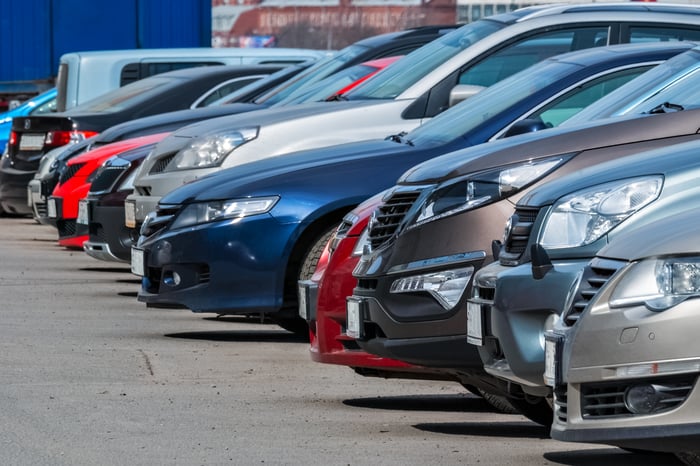 AutoNation experienced a 50% year-over-year drop in unit sales for used and new cars in the back half of March. In response, the company announced it has placed 7,000 employees on unpaid leave, or about 28% of its 25,000 part-time and full-time workforce at year-end. Management also cut salaries from 20% to 50% (the high end for the chairman and CEO). The company also lowered discretionary spending, cut advertising expense 50% in the second quarter, and delayed $50 million of capital expenditures.

These drastic steps are necessary in response to the unique circumstances presented by the pandemic. However, the company appears to be in a position to benefit when the economy reopens. AutoNation has been growing used car sales as a percentage of its top line, which increased from 22.7% of 2017 revenue to 25.6% in 2019. Due to affordability and credit availability, people are more likely to buy a used car over a new one when they go shopping.

Revenue from parts and services, while representing about 17% of revenue last year, accounted for over 46% of gross profit. This is another profitable avenue for the company during a period of economic sluggishness. These centers, deemed essential, have remained open during the pandemic but have been "operating below capacity," according the company's latest update. With stay-at-home orders in place, people are driving less, but this temporary setback will eventually become an advantage as car owners are also more likely to rely on repairs during an economic downturn.

AutoNation has a diversified product line as well, which will ease the decline in total car sales. Its domestic and import segments accounted for 31% and 33% of its new car revenue, respectively, while the premium luxury business (e.g., Mercedes-Benz, BMW, and Lexus) represents the remaining 36%. When people have to buy cars, they are more likely to purchase less expensive brands in a challenging economy emerging from the pandemic.

On April 13, AutoNation announced that CEO and President Cheryl Miller was taking a leave of absence due to undisclosed health reasons. The company's chairman, Mike Jackson, will fill those roles until Miller returns.

While her illness is unfortunate, it does come on the heels of Miller's July promotion after Carl Liebert resigned just four months into the job. That's not to suggest anything is amiss with the latest change, however. Jackson is well-qualified to take the reins having served as AutoNation's CEO for two decades, from 1999 to 2019.

In early April, AutoNation stated it had $400 million in cash and about $700 million available under its revolving credit facility, and the company's recent steps are intended to slash fixed expenses and shore up its finances. Its dealerships, like others in the industry, operate largely on a commission-based model, which holds down expenses during slow times since they're tied to sales volume.

As the largest automotive retailer in the United States, AutoNation is clearly going to feel the effects of the pandemic and increasing joblessness. However, certain aspects of its business indicate it has the potential to recover more quickly than its competitors -- for those with a high risk tolerance, the stock is a buy.

Why Avis, Hertz, and AutoNation Stock Got Slammed Another 10%