Please ensure Javascript is enabled for purposes of website accessibility
Log In Help Join The Motley Fool
Free Article Join Over 1 Million Premium Members And Get More In-Depth Stock Guidance and Research
By Demitri Kalogeropoulos – Apr 20, 2020 at 8:08AM

Warren Buffet has a few memorable sayings about buying stocks when it is uncomfortable to do so. Around the bottom of the Great Recession in 2008, his message to investors was to resist the temptation to wait until the all-clear sign before purchasing great companies.

"What is likely is that the market will move higher, perhaps substantially, well before either sentiment or the economy turns up," he said. "So, if you wait for the robins, spring will be over." I thought about that statement while indexes soared in the past few weeks.

Cruise ship giants haven't participated in the rally. In fact, Royal Caribbean (RCL -13.15%) is still down over 70% since the start of 2020. Yet while pessimism can be an investor's best friend when it applies to a strong business like Royal Caribbean's, waiting looks like a better move than buying this stock today. Here are three reasons why. 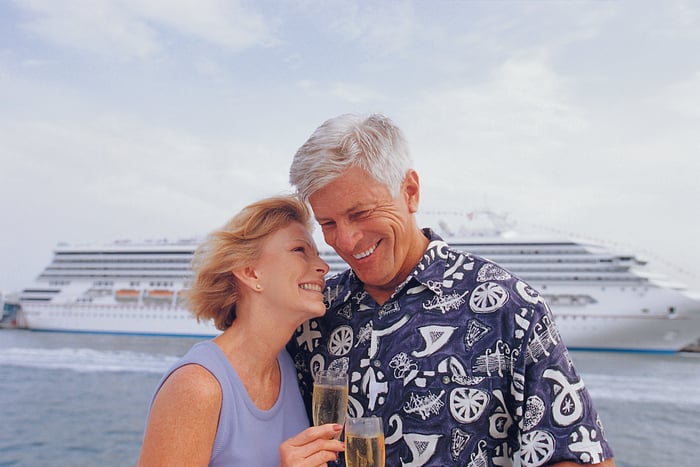 No company looks promising when its revenue is being held to zero by government mandates – even if those orders are temporary. But investors should be just as concerned with Royal Caribbean's huge base of costs that it can't remove or minimize.

The company maintains 61 ships containing over 141,000 cabins in total. Seventeen more cruise ships are on order, with expected launches between now and 2026. Every day that those vessels aren't fully used means more cash flowing out of the balance sheet.

It is similar to a hotel in this way, which is why occupancy rates are such an important growth metric. But Royal Caribbean can't as easily pare back its capacity, especially when its industry peers are likely trying to do the same thing.

Royal Caribbean was already heavily indebted before the COVID-19 crisis convinced management to take on billions in additional loans. Long-term debt stood at $8.4 billion as of the start of the current fiscal year, and that figure has jumped to over $10 billion in recent weeks. The company now has close to $4 billion in cash, which should help it easily endure even a pause of several months in global sailings. Interest costs threaten to be a serious drag on earnings, though, considering rival Carnival's latest debt draw came at a hefty 11.5% rate.

Royal Caribbean has some conditional debt covenants that further restrict its ability to lever up. These agreements include provisions, such as the minimum net worth of the company, that are likely to be relaxed given the current crisis. Yet they still add another layer of uncertainty to any potential earnings rebound.

There are good reasons to expect the cruising industry to bounce back from this crisis. Royal Caribbean notched record results last year, after all, despite the worst hurricane disruption in its history, weak demand in parts of Europe, and several one-time delays in ship launches. The business has grown through a wide range of economic conditions in markets around Asia and the U.S. in recent years.

On the other hand, the COVID-19 pandemic is a more serious challenge since it threatens the industry by dampening demand for cruises as a vacation choice. A shrinking industry is the main risk that Royal Caribbean sees to its earnings potential, since that would hurt booking trends, pricing, occupancy, and onboard revenues.

All of these trends were strong and improving in recent quarters, but the dramatic disruption of the industry should have investors waiting for more clarity rather than rushing out to buy the stock at depressed prices today.