Please ensure Javascript is enabled for purposes of website accessibility
Log In Help Join The Motley Fool
Free Article Join Over 1 Million Premium Members And Get More In-Depth Stock Guidance and Research
By Nicholas Rossolillo - Apr 20, 2020 at 8:31AM

This war-on-cash stock is in high growth mode, but it isn’t for everyone.

As coronavirus spreads around the world, industries sensitive to economic downturns have been getting hit hard. Digital payments and banking are one such example, since their businesses are highly reliant on money continuing to move freely through the system. High-growth digital payments platform StoneCo (STNE -22.30%) -- a Warren Buffett portfolio holding and rough equivalent to Square (SQ -6.72%) in Brazil -- has been hit especially hard. The stock is currently down 50% from all-time highs and is below its public debut price in late 2018.

There are good reasons for the pullback. This fintech stock carried an incredibly high premium headed into the crisis, and Brazil has by no means been immune to the effects of COVID-19. Some disruption is likely, and StoneCo remains priced for continued fast expansion.

Turbulent times ahead for Brazil

Emerging markets like Brazil are in a tough position fighting coronavirus. Resources to combat the disease itself are limited, and the financial firepower to prop up the economy is less than in developed markets with deeper pockets and cheaper borrowing costs. Even as it negotiates with the country's largest banks regarding a bailout package, Brazil's central government expects GDP growth to be zero this year. The World Bank is decidedly gloomier, calling for a 5% contraction in economic activity.

For now, let's say the end result will be somewhere in the middle, but no one really knows for sure as the final effects of the pandemic are still unknown. What is a given, though, is that economic growth is out the window. That means business activity is due to take a hit. For the digital economy, it's a two-edged sword. On one hand, a recession isn't welcome news no matter how you slice it. However, this particular crisis, which is forcing many into isolation, could serve as a boost to e-commerce -- which was already a long-term trend that just went from high-priority to absolute necessity for many businesses.

It's hard to say where that leaves StoneCo, which didn't provide forward guidance during its full-year 2019 report on March 2. The company does at least have momentum, having grown total payment volumes by 51% and adding more than 66,000 new customers (for a grand total of 495,000 at year-end) in the fourth quarter of 2019. It's also taking its disruptive point-of-sale fight to traditional banking. Just a couple quarters old, its initial push into digital business checking and credit is going swimmingly. Digital banking accounts grew four-fold from third- to fourth-quarter 2019 and reached a total of 79,000, and only 5% of its active customer base was using its business credit services.

With an economic crunch coming, StoneCo's tech-enhanced banking suite could become more important than ever, but investors should brace for at least a couple quarters of disruption due to coronavirus. 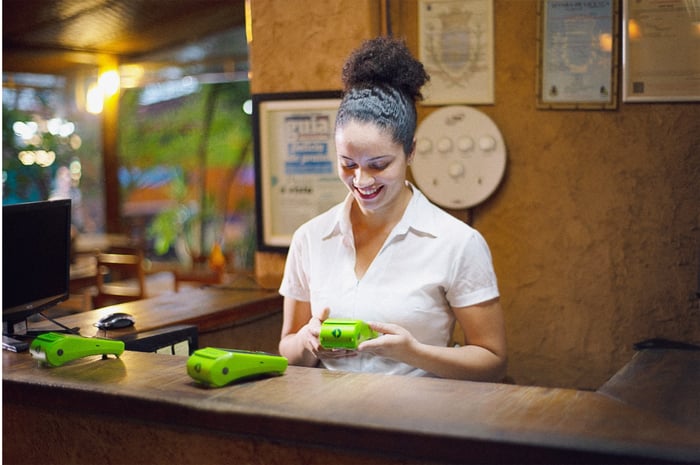 Invest, but know what's being bought

For what it's worth, StoneCo stock is currently trading for 10 times average analyst-expected 2020 revenue. Based on actual 2019 results, the stock trades for 23 times revenue. That would imply sales more than double between further gains in processed transactions and continued fast adoption of the new business banking service. Possible, yes, but I wouldn't count on it given the uncertain outlook.

StoneCo thus isn't quite the growth-for-a-value stock it may appear to be. That isn't to say it won't grow in 2020. The war on cash continues to make progress, especially in emerging markets where traditional money is still predominant. Even global leaders Visa (NYSE:V) and Mastercard (NYSE:MA) continue to call for revenue growth to kick off the year, albeit at a slower pace than originally called for. And with Brazil's largest banks still tied up in talks with the central government regarding bailouts and who assumes risk, StoneCo could successfully make further inroads with its extension of credit to those small- and mid-sized businesses that need it most. Just be aware that, while it could mean growth, it opens the tech outfit up to credit risk if those loans get defaulted on.

The good news is that this is a nimble tech outfit, not an old bank bogged down by liabilities. The company reported a net cash and short-term investment balance of 4.98 billion Brazilian reais  at the end of 2019 ($950 million using a real to U.S. dollar exchange of 0.19 on April 16, 2020). Turning the corner and becoming free cash flow positive (what's left after cash operating and capital expenses are paid for) in 2019 also helps.

All of this is to say that, for investors looking for long-term growth, StoneCo is worth a look. Shares will continue to be very volatile, though. My position is less than 0.5% of my portfolio, which allows me to periodically (in my case, quarterly) purchase more shares and average into a larger position over time. I'd advise investors do the same, if the decision is to buy at all given the wild ride that surely lies ahead.