One of the biggest patient-testing laboratories in America, BioReference Labs has been providing testing for the SARS-CoV-2 coronavirus to healthcare providers and via drive-thru sites in various states, including New York, since March 13. 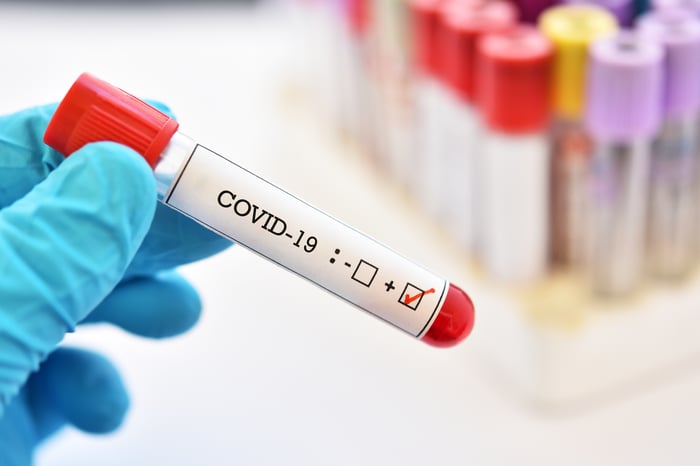 On April 6, the healthcare company announced it had tested almost 200,000 patients, and that it would be able to process 35,000 tests per day by mid-April. BioReference Labs' ability to process tests obtained through self-service sites makes it a good match for Rite Aid, the nation's third-largest pharmacy operator.

Rite Aid opened its first drive-thru testing site in Philadelphia on March 22, and by the end of last week, it was offering testing at 12 locations. On Saturday, it announced 7 new locations would begin testing in New York, New Jersey, Michigan, and Ohio. It also said sites in Delaware, Idaho, Michigan, New York, New Jersey, Ohio, Pennsylvania, and Virginia would begin testing on April 22.

Testing is emerging as a key component in plans to reopen the U.S. economy, and that means testing capacity has to increase dramatically from current levels. Laboratory Corporation of America (LH 2.08%) and Quest Diagnostics (DGX 2.02%) are larger competitors likely to benefit most from widespread testing, but OPKO Health appears to be carving out an important niche with its drive-thru testing services.

I suspect OPKO Health's capacity will continue climbing, allowing it to perform more tests. But investors should remember that the company's likely seeing a drop-off in other testing services, due to declining healthcare visits -- caused by decisions to pause elective treatments, and more generally, by social-distancing efforts.

An uptick in COVID-19 testing volume could help the company's financials over time, especially if regular testing becomes commonplace. But the company still has a lot of work to do to get its income statement back into the black. In 2019, it reported a net loss of $315 million on revenue of $902 million.