After years of urging customers to fill their shopping carts with as much as possible, Amazon is taking steps to rein that in, including putting its annual Prime shopping day on hold.

With the COVID-19 pandemic raging on and Amazon (AMZN 0.75%) inundated with orders for essential items as millions of people shelter in place, the e-commerce giant is taking the unusual step of trying to get consumers to purchase less.

That's a stark change for an online retailer that makes billions of dollars a year by encouraging consumers to fill their shopping carts with pretty much everything under the sun.

But with its warehouses overrun and some of its hourly wage workers suffering from the coronavirus, Amazon is having difficulties getting items into the hands of customers on time. That's resulted in days, if not weeks of delays for some products. It's a new normal that Amazon doesn't want its customers to get used to.

"The demand we are seeing for essential products has been and remains high," Amazon CEO Jeff Bezos wrote in the company's annual shareholder letter last week. "But unlike a predictable holiday surge, this spike occurred with little warning, creating major challenges for our suppliers and delivery network." 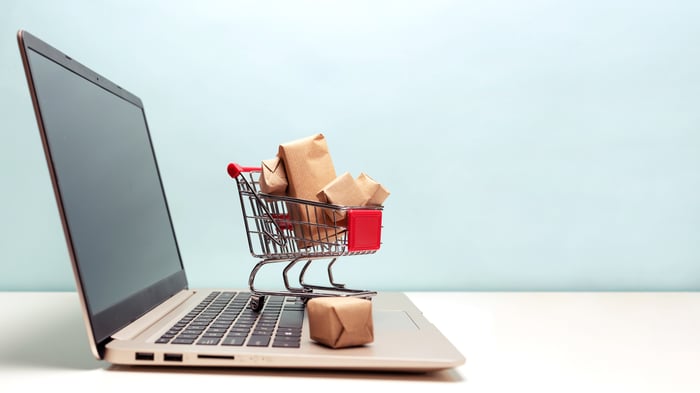 To reduce the bottlenecks, Amazon is taking several steps to discourage people from purchasing non-essential items. Citing people familiar with the matter, The Wall Street Journal recently reported Amazon is abandoning Mother's Day and Father's Day promotions, putting its annual Prime shopping event on hold indefinitely, and removing all of the widgets on its website designed to get people to shop more, including product recommendations.

It's also scaling back coupons and suspending its Ship With Amazon program, which ships items for third-party sellers' customers who don't shop on Amazon. That move enables Amazon to focus solely on getting products to its customers and alleviating some of the overload at its warehouses.

Amazon is also reaching out to third-party sellers to get them to ship orders directly to customers rather than using its Fulfill By Amazon program. That could be a blow to the e-commerce giant, since getting third-party sellers to fulfill orders through Amazon has been a focus of the company for years. But with the COVID-19 pandemic, it's willing to give up the fee it charges for now.

The Journal reported that about 30% of third-party sales volume is being shipped by merchants now, compared to around 10% before the pandemic. Amazon has also taken a cue from other companies and has been scaling back its advertising on Alphabet's (GOOG -1.46%) (GOOGL -1.70%) Google since March. The online retailer has significantly reduced its Google Shopping and text ads.

It won't be forever

At the same time Amazon is taking never-before-seen steps to rein in various shopping habits it encouraged for years, it's also laying the groundwork to return to some form of normalcy. Last week, it began accepting non-essential items into its warehouses again on a limited basis. That only happened after Amazon announced it was hiring 75,000 warehouses and delivery workers -- that's on top of the 100,000 it hired during March.

The tech stock has also created an internal team of senior executives who are determining when and how Amazon can resume shipping at the levels it was before the pandemic. The Journal reported the group thinks it could take more than two months before Amazon is back to normal. The executives also don't think any of the changes Amazon made to adapt to the pandemic will remain in place once the virus is contained.

Despite it all, Amazon is in an enviable position compared to other retailers that have experienced steep declines in sales. Retail sales in March saw their largest monthly drop on record, although sales soared at grocery stores and other retailers deemed essential, the National Federation of Retailers reported.

If anything, the pandemic is simply shining a brighter light on the breadth and size of Amazon's operations. It should also put nervous investors at ease about Amazon's prospects. Once the e-tailer's supply chain is functioning like normal again, consumers and investors can expect to see a return of all of those promotions and tools Amazon deploys to get consumers to shop more.