Despite beating analyst estimates on at least two key metrics, Coca-Cola (KO -0.95%) is finding the investor response to its first-quarter 2020 earnings release flat rather than fizzy, with the stock down approximately 1.6% so far in Tuesday trading. The beverage company reported earnings per share (EPS) and revenue both well above predictions. However, its expectations of lower second-quarter sales because of the coronavirus has investors bidding its share price downward.

In the matter of earnings per share, Coca-Cola announced adjusted EPS of $0.51, seven cents higher than the $0.44 anticipated by analysts. While net revenue dropped by 1% year over year compared to Q1 2019, it handily exceeded analyst projections of $8.3 billion, reaching nearly $8.6 billion and beating by $280 million overall. 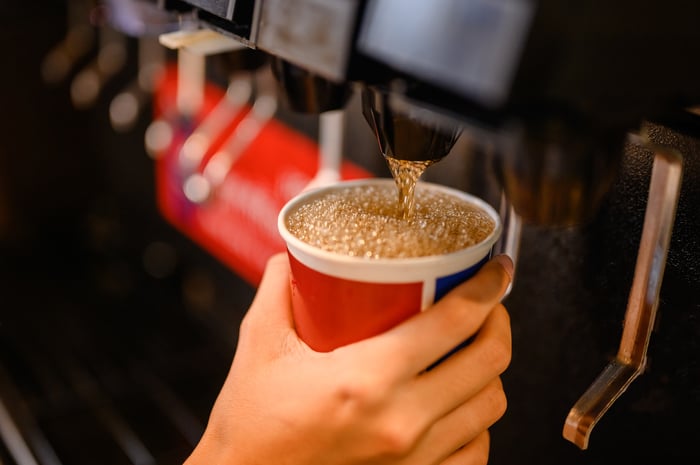 Other figures reported by the company include operating income dropping by 2% year over year and free cash flow declining 43% to $229 million. According to Coca-Cola's press release, COVID-19 is already having a strong effect on Q2 2020 operations. It says volume has plunged 25% worldwide so far in April, with most of the drop occurring in markets outside the United States.

Coca-Cola adds it cannot predict the exact impact of coronavirus-related measures such as stay-at-home orders, but it believes "the impact to the second quarter will be material." It also declined to offer guidance for fiscal year 2020 at this time.

The company had already noted the loss of on-premise sales at restaurants, sporting events, and similar locations would likely dent its strong early year performance. Though the actual figures may not be much of a surprise, the company's share price continues to fall after a slight rise at the start of the day.