Negative oil prices could end soon, but they may be back a month from now. Here's why.

Oil prices plunged to negative $40 per barrel on Monday in what is becoming a perfect storm for oil markets. Demand for oil is down, storage is filling up, and traders are trying to unload the paper oil they own before they have to take delivery of actual oil.

How can oil trade at negative prices? Will you see a break at the pump? Should we expect oil prices to go higher in the coming days, weeks, or months? Here's what you should know about oil trading and how it affects the economy, oil stocks, and you. 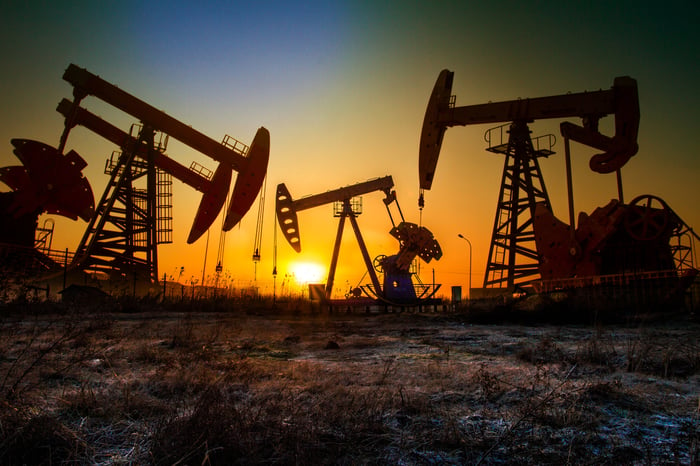 When the price of oil is quoted, it's not the price of an actual barrel of oil that's being quoted -- it's a contract to buy oil in the future, or the price of a futures contract. The standard way oil prices are quoted is to use the shortest-term oil futures contract currently trading, which is the May 2020 contract. According to the terms of this contract, oil must be delivered to designated locations in Cushing, Oklahoma, between May 1 and May 30, 2020. To prepare for physical delivery, trading on this contract closes on April 21, 2020 (today) and officially settles. Anyone holding a contract has to deliver oil per the contract's terms, which include this language:

Delivery shall be made free-on-board ("F.O.B.") at any pipeline or storage facility in Cushing, Oklahoma with pipeline access to Enterprise, Cushing storage or Enbridge, Cushing storage. Delivery shall be made in accordance with all applicable Federal executive orders and all applicable Federal, State and local laws and regulations.

Tomorrow, the officially quoted price for oil will change from the May 2020 contract to the June 2020 contract, which settles on May 19 and has delivery required in June 2020.

The nuance to the headline numbers we see for oil is that it's not really physical oil that's trading hands, it's paper that promises the future delivery of oil. And that distinction is where the problems have come in.

Usually, closing out oil positions near the end of the contract's trading window isn't a problem, but these aren't normal times. The worst-case scenario normally would be that a trader would have to take physical delivery of oil, but they could rent space in an oil facility in Cushing, Oklahoma, and sell their product into the distribution market. But Cushing facilities are hitting their 76 million barrels of capacity, because demand for oil has fallen as much as 50% over the last month, and production hasn't fallen enough to match.

For traders who never intended to take delivery of physical oil, this is a problem. They have to find a way to take oil and store it, sending the price of offshore tankers, storage facilities, and even small oil tanks through the roof. But there's limited capacity for these storage facilities, and eventually, traders get so desperate that they'll pay someone to take oil futures off their hands. That's what happened Monday and Tuesday as the prospect of finding an alternative to taking physical delivery diminished.

The storage problem isn't going away anytime soon, so we shouldn't expect a big rebound in oil prices. Economics 101 suggests that supply should go down to match demand. After all, that's what the price of oil futures is telling suppliers to do.

What oil producers could do is get paid to "buy" back their hedged oil contracts rather than delivering oil. Producers sell futures contracts because they try to anticipate their oil production and lock in a price months or years out into the future. They sell these futures contracts to the traders mentioned above, who don't actually want to take delivery of oil. Traders anticipate being able to unload the contract before it expires.

If oil prices fall to $20 or $30 per barrel between when the contract is sold and when delivery is scheduled, there's no loss for the oil producer; it can continue pumping oil and realize the $10 per barrel profit it locked in on the futures market. There are still costs associated with stopping oil production once a well is drilled, so producers often keep production going even when the price of oil drops short term.

Where oil prices go from here

The oversupply dynamic in the market isn't getting any better in the short term, and oil prices will be wacky for a while as a result of these strange dynamics in the oil market. For example, on Wednesday, it will probably look like oil prices jumped, but what's really happening is that quotes for oil will roll from the May 2020 contract to the June 2020 contract. And on May 19, 2020, when the June contract settles, we may go through this chaos again.

The bottom line is that traders are running out options they once had, such as taking delivery of oil in Cushing, Oklahoma, for a short period of time and just storing it for future sale. Eventually, production will cut back to match supply, and traders will adjust, too, but in the meantime, we can expect some strange moves in oil prices as futures contracts move hands from traders to companies that actually want to take delivery of oil.