Please ensure Javascript is enabled for purposes of website accessibility
Log In Help Join The Motley Fool
Free Article Join Over 1 Million Premium Members And Get More In-Depth Stock Guidance and Research
By Matthew DiLallo - Apr 22, 2020 at 9:37AM

Clearway Energy (CWEN 0.90%) (CWEN.A) has had its share of ups and downs in recent years. Its prior sponsor mismanaged the renewable energy company, causing its performance to lag. Meanwhile, one of its largest customers, California utility PG&E (PCG 0.20%), went bankrupt last year, which affected the cash flow it generates from assets tied to that company.

But with a new sponsor taking over in late 2018, Clearway has started turning things around. That's clear with its 2020 outlook, which should see the company grow its cash flow by more than 20%. This optimistic outlook enabled the company to boost its dividend by 5%, pushing the yield up to 4.4%. Those growth trends should continue after the company signed deals to buy several wind power assets from its sponsor. 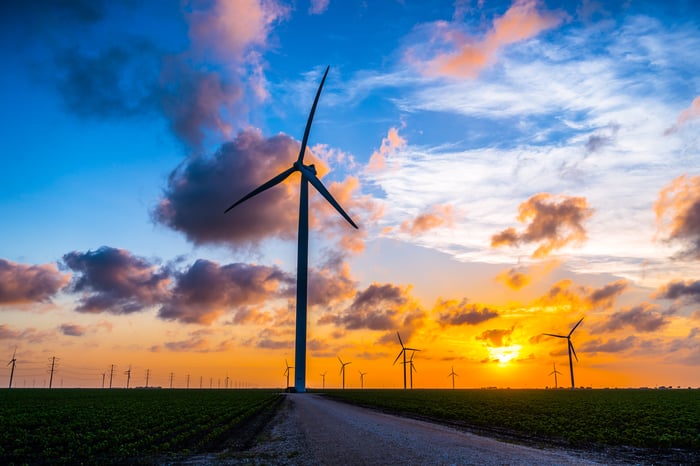 Clearway Energy noted earlier this year that its sponsor offered it the opportunity to acquire and invest in three wind-related projects:

Clearway has now signed binding agreements to invest in all three of these opportunities. It expects to pour $241 million into these deals, which it will finance with existing corporate liquidity (cash and borrowing capacity). It anticipates closing each transaction by year-end. Combined, the company expects these investments to generate an average of $23 million of cash flow per year over the next five years. That will provide a nice boost to Clearway's cash flow, which was on track to hit $310 million this year before it made these deals.

The increased cash flow from these new investments is one of the main drivers of these transactions for Clearway. But it's not the only factor. Other important ones are that it will boost its wind business, which will increase the company's regional and customer diversification.

Thus, the boost to its wind business will do several things. First, it will make it an even larger contributor to cash flow. Meanwhile, because these assets are outside of California, they'll reduce its overall exposure to that market and PG&E since the wind projects have power purchase agreements with several other customers. Furthermore, the geographic spread of these assets around the country is worth noting since wind resources tend to vary by region in the amount of energy produced versus capacity:

This geographical diversification will help smooth out its quarterly cash flow.

Clearway Energy had to reduce its dividend last year due to the bankruptcy of PG&E. Thanks to a series of acquisitions over the past several months, however, it was able to start growing its payout again in 2020. With these latest deals, the renewable energy company should have the power to keep increasing its dividend since the new investments will boost its cash flow and diversify its operations. Those factors make its dividend increasingly attractive to investors who are seeking a high yield powered by renewable energy.